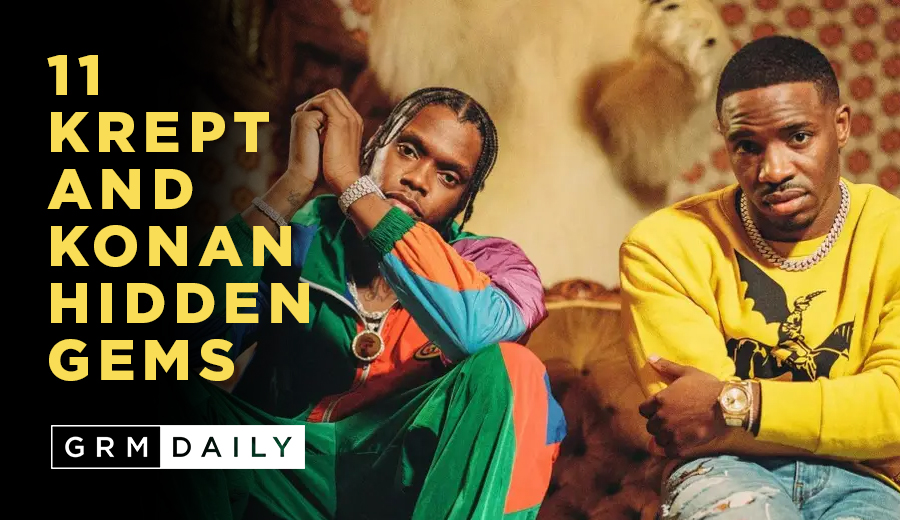 Krept & Konan are two of the scenes most prolific artists, entrepreneurs, fashion icons and trendsetters.

When the South London hailing duo announced the arrival of their album Revenge is Sweet, the two were enjoying the social media buzz surrounding their BBC Three show The Rap Game UK, had recently unveiled a watch line, were gearing up for upcoming tour dates and were celebrating the success of their Croydon-based restaurant Crepes and Cones.

Krept & Konan are a consistent force on the UK scene to be reckoned with but aside from their most prolific hits such as “Don’t Waste My Time”, “Robbery”, “Freak of the Week” and of course “I Spy”, there are some hidden gems in their catalogue which every fan should become familiar with.

Check out 11 deep cuts from Krept & Konan below.

Krept & Konan never shy away from their love of Jamaican culture and dancehall. Several tracks in their catalogue such as “For Me” and “Freak of the Week” rely heavily on dancehall samples and patois laced lyrics.

The 2011 track “Warzone” proves that Krept & Konan have been embracing their Jamaican origins long before they broke into the mainstream with this raw track that explores the perils of life on and living in some of the most dangerous areas of London.

“Warzone” is a timeless track which houses relatable themes and thanks to its clean production, the track could easily be released now and become a fan favourite.

This track really is a throwback; the visuals were released on our platform during its early Grime Daily days.

“Who’s Real” is an assertive offering which evidences early proof of Krept and Konan’s consistent talent for wordplay and punchlines.

Konan opens the track with an assault of bars, spraying constant double entendres which are bound to go over your head on the first listen.

Konan is also ad-lib heavy too and fans of K&K’s new material will see how the duo evolved since this track dropped; building on the raw talent they evidenced in their early tracks such as this one.

Krept takes over the hook on this one and manages a hard-hitting verse which makes use of punchlines and popular culture references.

Look out for a guest feature from Don Strapzy (Dru Blu) who sprays some serious bars of his own.

This track is a throwback. Released over ten years ago, Krept & Konan are extremely young in this video but their intelligent lyricism and intense bars sprayed over a dark instrumental put them years ahead of their peers.

It is safe to say that Krept & Konan were on crud on this track and it is a vital existence in their catalogue which evidences their versatility.

Krept & Konan can do crud like on this track or they can make tunes and riddims like “Pour Me Another One” and “G Love”.

Don’t pigeon hole & Kones; they are two of the most versatile artists in the UK.

Devoting their mixtape 7 Nights to r&b inspired tracks that soundtrack all things love, sex and lust, Krept & Konan are no stranger to slower tracks aimed at those enjoying all aspects of the romantic side of life.

“With You” houses a female chorus and bars from Konan that celebrate the leading lady in his life and shower her with lyrics that convey his affection.

This track appeared on Redrum and provided a mellow contrast to the tracks on the project which dealt with alternate themes.

Check out “With You” below and share it with the special person in your life.

“Jump in the Middle” featuring and Cadet

Also taken from Redrum is this wavy track which uses an instrumental that borrows elements of funky house.

Contemporary K&K fans will know the artists easily flowed over with their hit “Pour Me Another One” which re-fixed the 2000 Sweet Female Attitude hit “Flowers” but did you know the duo can also destroy a funky house instrumental? Probably not.

Joining Krept & Konan on the track is and a young Cadet.

Check out the track below.

Taken from the mixtape Tsunami which is highly regarded as a release for the duo, “The Beginning” sees Krept & Konan engage in lyrical warfare and rival not only each other but the guest features on this track.

The fast-paced instrumental is no challenge for the South London duo who flow with precision their life depended on it.

This track really was “The Beginning” of what would become an illustrious career for the two rappers who changed the game in numerous ways.

“Heart of a Lion” featuring Wretch 32

Echoing resilience and housing vulnerable lyrics, this track is a commendable offering from a young K&K who offer relatable lyrics which construct an all too familiar narrative about the trying nature of life and the struggles it throws at us.

Wretch 32 offers a guest feature on this one and by holding their own on a track with an artist considered as one of the greats, Krept & Konan evidenced that they were on the path to receive similar pioneering and legend status.

Elements of this track can be attributed to rock and pop genres but this is not your ordinary pop track.

“Let Go” is a relatable offering which houses aspirational and emotional lyrics about life struggles and pain.

With Krept & Konan being resilient artists who have unfortunately experienced a series of tragedies throughout their career, this track hits home thanks to its honest and vulnerable themes.

Check out the visuals below.

This list would not be complete without an entry from the Young Kingz project.

Opened by a fiery verse from Chip, Krept & Konan made sure they were not outdone by Mr Can’t Run Out of Bars by offering up a lyrical onslaught of their own.

The clean visuals show the artists vibing to the track and thanks to its catchy chorus and memorable chorus, this gem is one all certified K&K fans should be aware of.

Taken from their debut album The Long Way Home, “So Easy” is an underrated fan favourite which was a crowd pleaser when performed on tour.

With a catchy and melodic chorus on the track which houses wavy verses from both Konan and Krept, this track had the potential to be a megahit and can definitely be argued to have been before its time.

“Save Some” featuring Hudson East

7 Nights was the r&b inspired option to its sister release 7 Days which housed hard-hitting rap.

Like the track “With You” which appeared on this list, this track also explores relationships and K&K’s ability to construct narratives with their lyrics whilst simultaneously constructing a mellow r&B vibe with their use of pitch, tone and cadence.

This track deserved the visual treatment and is, unfortunately, one of the tracks taken from this incredible project.

Give “Save Some” a listen below.