GRM Exclusive: Why We Shouldn’t Forget About ‘Dubplate Drama’ 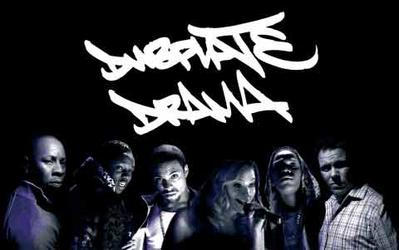 In recent years, last year in particular, we have witnessed the grime scene revert back to its raw and uncut roots, while simultaneously dominating the mainstream music industry in the process.

From the return of Risky Roadz to Skepta winning the Mercury Prize for his album Konnichiwa, 2016 enabled us to reflect on how far the scene has come since its emergence as a subculture in the UK in the early noughties. However, although it’s taken over a decade for grime to finally get the acknowledgement it deserves, the genre had its first taste of the mainstream world back in 2005 in the form of the urban drama series Dubplate Drama.

Like many other platforms from the last decade, Dubplate Drama played a huge part in pushing the world of grime forward, but the series is often left out of discussions regarding the scene’s progression. The series deserves more recognition.

Dubplate Drama, which was made up of three seasons lasting from 2005 to 2009, follows the story of a promising MC named Dionne (played by the First Lady of Grime, Shystie) and her dream of getting a record deal to provide for her grandmother. The series aired on MTV Base and Channel 4 – two national broadcasting channels in the UK – and the series was monumental for many reasons.

For example, the show is described as “the world’s first interactive drama series” because it enabled audiences to dictate the outcome of cliff-hangers. At the end of each episode, legendary UK rapper Rodney P would urge fans to vote for what they’d like to see happen in the next episode by texting in or visiting the website. The most-voted option aired on TV the following week. The first series attracted 3.3 million viewers, which suggested the interactive feature was popular with fans of the show. Just like the genre it represented, the series relied on heavy audience engagement and was filled with innovative ideas.

As well as being the first interactive drama series, it was (for many people) the first time they would have been able to observe the ins and outs of grime culture. From fixing aerials on top of tower blocks for pirate radio stations to clashing in raves, the series sheds light on the raw elements that have come to define the early days of grime. Of course, if you were heavily into grime in the early noughties, Dubplate Drama wouldn’t have exposed you to anything too new or shocking. However, MTV Base and Channel 4 had a national reach and this would have allowed a variety of people to acquire knowledge on the underground music scene in England.

Because of its aggressive and gritty nature, grime is generally associated as being a male-dominated scene, and this is another reason why Dubplate Drama deserves more recognition. In the series, the protagonist, Dionne, finds herself caught up in all things crime and grime, and she duly proves that she is just as talented as her male counterparts. Despite the sexist slurs and the sheer underestimating she experiences, Dionne knocks down the hurdles in her music career and is characterised by her bold and fearless nature. She was also joined by several other female artists from the UK, including Ms Dynamite and Nolay, to highlight some of the gender barriers which existed, and still exist, in the music industry.

Nolay and Ms. Dynamite are just some of the cameos made within the three seasons of Dubplate Drama. Other appearances were made by legends such as J2K, Ghetts, Noel Clarke, N Dubz, Akala, Skepta; the list goes on. Since then, many of the individuals who featured in the series have gone on to do big things in their careers. Although Dubplate Drama is not solely responsible for the success of many of the scene’s most established artists and creatives, the series did help expose their talents and also created new opportunities for many.

Away from the all-star cameos and the series’ hilarious scenes, Dubplate Drama is also dominated by more serious tones and issues. For example, we witness artists trying to balance street life and music. We also learn about the “independent artist versus record deal” debate. Most importantly, we observe how grime enabled many disadvantaged youngsters to get off the streets and use their unique perspective to express themselves and this is one of the key themes within the series.

Because we have seen several grime artists succeed in the music industry in recent times, it’s easy to forget the obstacles many of them had to climb over to get to where they are today, but Dubplate Drama is a reminder to us all. In the midst of all the madness in the series however, there are also jokes, cheesy chat up lines and bizarre scenarios which reflect the fun-natured aspect of the grime scene.

If you aren’t familiar with Dubplate Drama, or if you want to re-watch a few episodes, every episode is available to watch on YouTube. Begin your trip down memory lane by watching the first episode below.