from ‘high street kid’ to ‘stacko’: the mostack journey so far 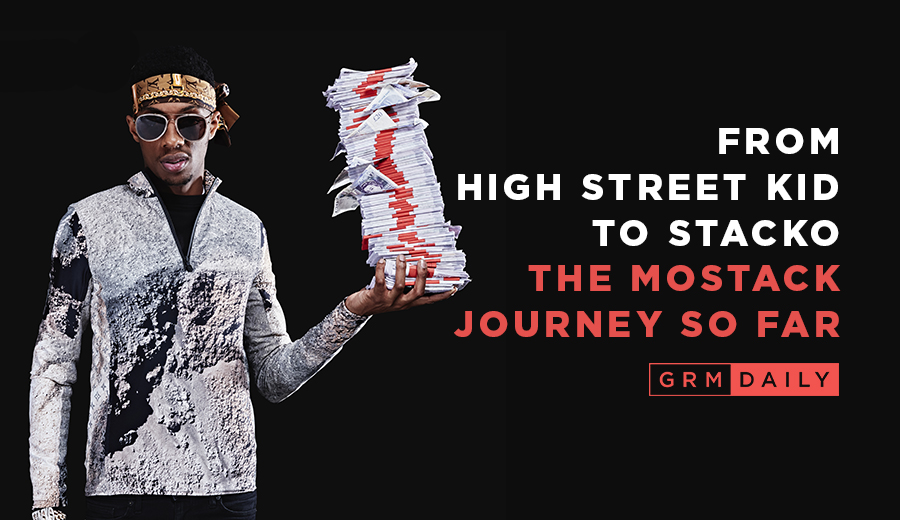 As one of the artists responsible for helping propel UK rap from a scene that was exclusively underground to a sound now enjoyed by the masses, Mostack is on the path of challenging the status quo of UK music entirely.

With refreshingly honest bars and a charismatic personality that illuminates through his music, Mostack credits fans from all walks of life. There simply isn’t another artist like him. His music is a personification of his own personality; who’d dare to even try and replicate a style so personal to someone?

This is exactly what makes Mostack such a great artist. Not only can he lyrically compete with the best, and flow as well as anyone, but unlike many of his peers, he is very comfortable being himself. No buddy (lol) can rap about getting rejected by women, or getting chased down by their opps in such a jovial manner, not sound moist and STILL make a banger quite like Mostack.

Having dropped his last project way back in 2017, anticipation for a new Mostack body of work has never been higher. Summer is upon us and we still await a project to encapsulate this season.

With the release of his debut album Stacko we thought it would be best for us to reacquaint you with Mostack’s musical journey to truly appreciate such a gem of an artist.

It all started back around 2010. Mostack went by the name Lil Mo, and him and his boys steadily built a following freestyling on the block, posting their videos on legendary YouTube channels like LimitlessVids.

His style back then was purely a raw reflection of the street life he was encountering on a day to day basis. Despite being in his early teens, Mostack evoked a confidence beyond his years on his freestyles and never looked shy or awkward in front of the camera.

Whilst the talent he displayed was evident to see, nobody could have foreseen him evolve into the artist he is today.

Mostack’s breakthrough came in 2014 when he dropped arguably one of the biggest songs of the year “No Buddy”. With a mischievous and unorthodox style, Mostack was a breath of fresh air to a scene teeming with artists who were undoubtedly cold, but difficult to play in the clubs or radio because of how raw and serious their music was.

He then went on to prove himself as a mainstay of our playlists going on to drop bangers such as “Sorry Mate” with Benny Banks, “One Day” and “I Do”. With Mostack’s popularity growing every time he touched an instrumental, it was only a matter of time before he was to feature with an artist equally growing in stature and pushing UK rap to new heights.

“So Paranoid” with J Hus was the most anticipated link up of 2015 and proved Mostack’s ability to hold his own with the best in class.

Of course, this was just the beginning of a blossoming relationship between the artists who would go on to feature heavily on one another’s future projects.

Having proven in 2015 that he was capable of consistently dropping bangers, fans where eager for Mostack to drop his debut mixtape.

Gangster With Banter was a project tailored to a variety of listeners, with club bangers, street tracks and songs for the girls. If there ever were any doubts about Mostack, they certainly ceased to exist beyond this point.

It was through GWB we saw the birth of a relationship with Steel Banglez. Whilst Banglez had been making beats for years prior to 2015, he had taken a break from the scene and on his return, “Your Man” was one of the first tracks he made.

And what a return it was for Steel Banglez. Production wise, he’s gone on to arguably have the greatest influence on changing the soundscape of the UK rap scene.

Towards the end of 2016, there was little doubt at this point that Mostack was one of the most exciting rappers in the UK. Yet, he fully distinguished himself from most of the rap roster when he dropped “Liar Liar” and “Block Popping”.

A brilliant song, with an all-star video cast featuring the likes of Stormzy, Wretch 32 and J Hus, along with Mo’s local peoples, “Liar Liar” proved Mostack was one of the hottest artists of the year. If that wasn’t enough, he was tap-dancing on the necks of the competition at this point by dropping “Block Popping” only a couple of months later!

With such an emphatic end to an already strong year in 2016, Mostack set himself up to take his musical career to an entirely new dimension in 2017.

After consistently dropping new music throughout 2016, there was a heightened expectation on Mostack to drop new music, especially after ghosting for the best part of 3 months. But as they say, good things come to those who wait. Rather, in this case, greater things came our way.

Mostack was determined no hangover would be felt from 2016. There was a positive shift in sound as the beats were more finely tuned, crisper engineering and the videos became even more cinematic.

So, when Mostack finally dropped “Let It Ring” in February 2017, it literally rang out. Everywhere.

Artists can be ruthlessly forgotten about in an instant, yet the reception off the back of “Let It Ring” proved Mostack would be here for the long run.

The most impressive indication of just how far Mostack had come since the days of Lil Mo was charting 16 in the UK Album Charts with High Street Kid. It also showed how much further he could take his sound if more commercial elements were strategically applied to his music.

As he had done so in 2016 with “Liar Liar”, Mostack provided us with another star turn on the classic track “No Words”, this time teaming up with Dave and Steel Banglez. This track was a masterpiece cultivated with surgical precision and earned the commercial attention required to grow to new heights.

Having blessed us for the best part of three years consistently dropping projects and singles, Mostack could be forgiven for not dropping a project in 2018. Rumours, teasers and then of course, confirmation of Mostack working on his debut album also helped ease the pain.

Yet, 2018 was still a massive year for him. He absolutely shut down the festival season, with the pinnacle performing on the main stage at Wireless. We were of course treated to singles such as “What I Wanna” and “Litness” which popped off throughout the year.

Now with the album complete, what lays in wait for Mostack? We already know he’ll have the upper echelon of UK rap on his debut album, with Stormzy, Fredo, J Hus and Dave all featuring.

Stylistically, we can expect a variation in sound and content but delivered in Mo’s charming way. Take “Shine Girl” for instance; this track, with uncharacteristically strong RnB vibes, is already potentially the vibe of the summer.

One thing for sure though, Stacko is destined to be of the best projects of the year and raise the standards even higher for UK rap.