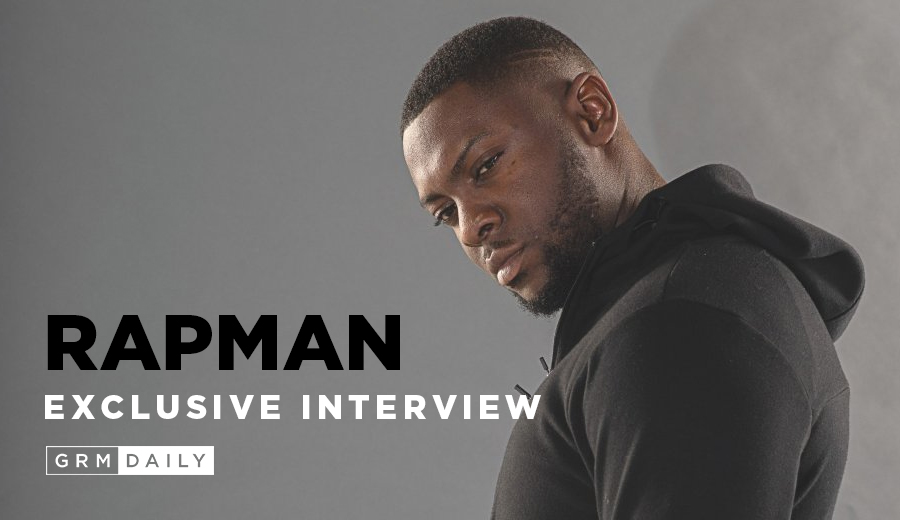 Animated storytelling through rap is considered by many to be a key element of great rap music, but never has being a great storytelling-rapper equiponderated to being a great movie maker. No rapper, if any at all, has tested this hypothesis quite as aggressively as Rapman has.

After the viral success of “Shiro’s Story”, and then being cordially accepted into Jay-Z’s RocNation family, Rapman announced that he would be taking a blockbuster film to cinemas nationwide. In conjunction with the BBC and Paramount Pictures, Rapman wrote, directed and starred in Blue Story – a feature adaptation of his YouTube series about a pair friends that become deeply embroiled in a futile post-code war between Peckham and Deptford.

Previously limited by the glass-ceiling of just rapping, Rapman is pioneering a change in the cognition of what is really possible for creatives in this space. Last week, GRM caught up with him to talk about Blue Story, what working with Jay Z is like and more.

Although you broke into the entertainment industry through music, you’ve always had a knack for writing gripping storylines. How did this come about?

“I’ve always been a big fan of stories, whether it was biblical or Shakespeare, any story that I thought was good just stuck with me. I grew up listening to Jay-Z, Tupac, Biggie and Nas and back in the day, all of their albums had a storytelling song on it. The storytelling song was always my favourite song but they never used to do the visuals to it! So when I started rapping, I wanted to rap like them but take the visuals to another level. Blue Story was actually the first one I wrote as it goes.”

Of all the videos you wrote throughout your come-up phase, did you expect “Shiro’s Story” to be the video that connected?

“I actually wrote that in 2016, I just didn’t think anything of it. I wrote it in a week for Link Up TV, they wanted it for a compilation album. In the end they decided they didn’t need it anymore, it was a minor. I didn’t think it was all that. I did an EP the following year called What’s The Story and I needed a story song so I just put that on there. I remember putting it on Spotify and getting really positive feedback. Everybody seemed to like it so I thought let me just do a cold video for it.”

Considering that people were already familiar with the plot for Blue Story (or so they might have thought), did that add to the pressure of making your very first film?

“Kind of, it was more of a sense of wanting to make it different from the original. I just didn’t want everyone to know how it was going to end… Plus back when I dropped the original Blue Story, nobody knew me. I didn’t even have a Twitter or an Instagram. In fact, my biggest fear was that after “Shiro’s Story” became this viral success, that people were only hungry for more “Shiro’s story” content and may have been frustrated that they were getting something else. But it worked out in the end.”

Blue Story quite thoughtfully tackled the social issues of poverty, peer pressure, trauma and mental health. Why do you think these issues are so prevalent in black communities?

“I think they’re a big problem in every community, the black community just doesn’t like talking about it. I wanted to put it in my movie without saying “hey, look at me guys. We’re talking about mental health and grief and depression”. I wanted to put in it so you don’t even realise. It’s so deep, kids could be dealing with an issue and think “wait, where have I seen this before?”.

But that’s how it is in the world, you go through things, you try and talk to your friends and sometimes they just don’t get it. Society tells you to shrug it off, but sometimes you can’t. People that you look up to are telling you to do certain things and if they’re asking you to jump off a bridge, you’re going to jump off the bridge – you don’t know any better. I just wanted the film to have a lot of really relatable moments, for everyone.”

What parts of the film do you hold dearest to you/ biggest reflections of your upbringing?

“The whole film means so much to me but the scene that always makes me feel something is Timmy and Marco’s beef scene in the playground. That always hurts my heart. You saw how close they were up until then and now over peer pressure and a misunderstanding, they’re in a madness in the playground. Then from the minute a punch was thrown, things were never going to be the same. It’s how it goes in real life.

How do you respond to the critics that claim Blue Story is a glamorisation of gang culture?

“There’s no film in the world that has 100% positive feedback, but to say it glamorises gang culture; you must have not watched the movie. If you aspire to be any of those characters then I just don’t know for you, you need therapy or something.

There’s nothing glamorous about the way this film concludes, like besides the party scenes there’s barely a moment where they’re enjoying themselves – they’re always out looking for the other side. As they got older, there was less and less fun in it. But the way I look at it, ignorant people always have to say something. If everyone says it’s good then not enough of the world has seen it.”

What role do you think Blue Story will play in bridging the gap between the urban communities in the UK and America?

“Blue Story and Top Boy were like the biggest urban productions last year, they’re going to have a massive impact. I was sat, hidden at back of one of the LA screenings with literally 300 people laughing and crying at the same moments as us. I stayed behind for a Q&A and they just didn’t know how London got down. They’ll see us more similarly to how they see themselves… they thought we were all just eating crumpets and drinking tea but now they’ll understand that it’s just as “real” in London and that we go through what they go through.

It’s an international problem, not just an American problem. A lot of them haven’t really travelled or seen anything like Blue Story, Top Boy and whatever else is on Netflix. So for them it’s the first time they’re hearing our slang, learning our culture and seeing what our parties are like.”

Looking forward, what other projects are you & the RocNation working to bring into fruition?

“You know what’s good about the RocNation – they manage me init – but whatever I want to do, they’ve got my back. They’re like big brothers, with keys to every city. And even though they’re my management, I don’t rely on them, I still do my own ting. I consult them before I go through with anything and we’ve got a lot of things planned together. It’s just a blessing.”

“The next project I’m doing is a movie called American Son, big Hollywood movie. That’s what I’m working on right now, actually. We were meant to be filming in the summer time but you know, Corona… It’s based on a French film called The Prophet but with twist – a modern day version. You might see a few familiar RocNation faces in there. That’s all I’ll say for now.”

Cool, now I have a dream that one day UK rap, drill and grime will genuinely crossover and connect with American ears (because in terms of numbers, the market of listeners it exposes the artists to is a joke – NOT FOR AMERICAN VALIDATION). With a foothold over there, is that something on you’d want to influence?

“I think it’s kinda together now, you know. You know, the accent is barrier but they’ll get used to it. Drake’s done a lot to change that. We appreciate the American’s that like our stuff but if they don’t, it’s not a big deal bro. Everyone’s still doing so well. One day we probably will crossover because everything goes full circle and it’s already getting there.

Compared to 10 years ago, there’s already been massive changes. Like if you were to tell me now that Jay-Z and Stormzy have a song together, would I be surprised? Not at all. 10 years ago, I would have laughed in your face and told you to be serious. In all honesty though, I think British fans would rather hear Stormzy do a song with Dave than an American guy anyway so I don’t even feel like it’s that big of a deal.

Eventually we’re going to see a UK artist go ever and crack the US. I should say rap artist because Ella Mai’s already done it. Someone like Dave or Stormzy, it’s possible. But I reckon when the times comes, it’s going to be someone that’s not so big over here that’s going to kill it over there.”

So now with world-renowned management and industry clout, what is the ultimate goal you’re trying to achieve?

“For me, I want to get a star on the Hollywood Walk of Fame. I want something to be there so that when people walk past they think “Rapman, oh, I wonder what he used to do”. I want to win an Oscar, even though it is a look at me kind of thing. I want to do it when Black people are more appreciated in those ceremonies. I want to make hit films and TV shows and just leave my mark, like Ryan Couglar, Martin Scorsese and all the other great directors have done.”

Blue Story is available to Download & Keep and on DVD now.