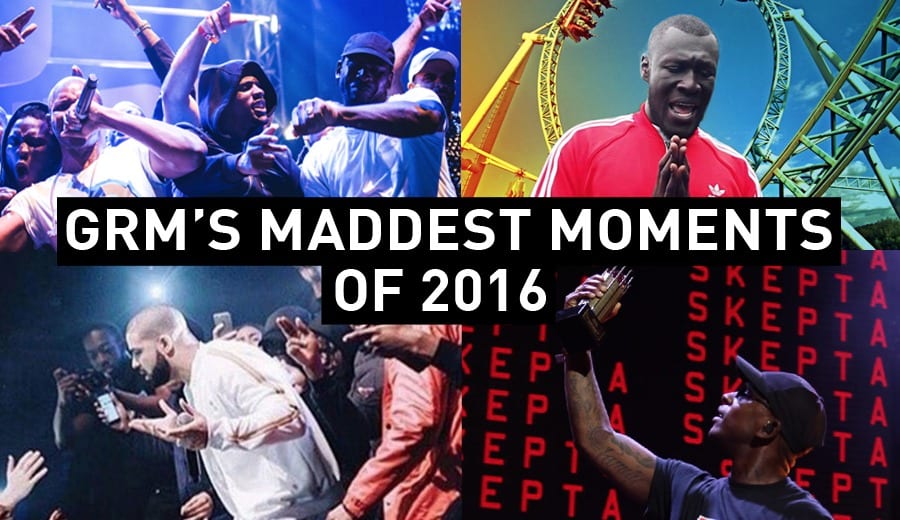 It’s here. We have come to the end of 2016. With 2017 knocking on the door and the inevitable craze of “new year, new me” picking up steam, lets take a moment to enjoy the 12 months that have passed and celebrate all the crazy things that have happened. On a personal level, GRM Daily has seen some fantastic changes and you will all remember the day we went dark – only to come back with a bang, new logo and all! The scene has had a fantastic year and numbers of artists, both young and old, can look back on 2016 with fondness. As always, we like to make it as easy as possible so instead of racking your brain to think of all the maddest moments of the year gone by, GRM have got you covered with our round up of 11 Of The Maddest Moments From The Scene in 2016

Compared to the previous year, we haven’t heard a whole lot from Big Mike in 2016. As well as showing us his soft side with a love song from his “Birthday Girl” Maya Jama, he also looked to go all out when it came to his birthday celebrations. After convincing Thorpe Park to let him take over the park for his 23rd birthday, he teamed up with everyone from Adidas and Nandos to provide goodie bags and #MERKY burgers respectively. Showing that it was all about the music, he ended the night on a massive high – dropping a surprise gig with sets from the likes of Section Boyz, Novelist, Dave, Nadia Rose, AJ Tracey, Big Tobz and Big Zuu.

2. Azealia Banks attacks grime and UK rap and gets shut down

Back in May, US rapper Azealia Banks slammed the UK rap scene after being dropped by a festival bill. Just hours after her racist and homophobic rant against Zayn Malik [that later led to her removal from London’s Born & Bred Festival line-up], Azealia claimed that the “the UK really can’t rap though” and called the British scene “a disgrace to rap culture in general.” She also declared “UK rappers NEVER have swag. It’s ALWAYS FORCED,” in a series of tweets. However the scene didn’t take kindly to her words, as artists like Mikill Pane, Nolay, Manga St Hilare, Jammz and Novelist hit back on social media and Big Narstie even gave her the honour of being the “Waste Girl of the Week”. The final blow came when P Money took to his set at Born & Bred with a t-shirt emblazoned with FUXX AZEALIA BANKS.

3. “Whippin Excursion” at the RATED Awards

The RATED Awards 2016 will be fondly remembered in our minds for a number of reasons [check out out official list of the maddest moments here] and one had to to be the way we ended it. After taking home the prize for Best Artist of the Year, the Landlord showed us how to get lit when he took to the stage for the final set of the night. The final performance is a big slot to fill after Kano‘s last year, and this time around was no different with Giggs taking to the stage and absolutely smashing it! Going through his barrage of hits from his smash album Landlord and bringing Kano out for “3 Wheel Ups”, everyone took to the stage, including Youngs Teflon, 67, Novelist and Skepta, for his rendition of “Whippin Excursion”. The highlight was Skepta’s improvised dance which has subsequently spawned it’s own meme! The stage was lit, the crowd was lit and was a perfect round off to another momentous night for GRM and the UK scene.

Now Beyonce wouldn’t be the first person to spring to mind when talking about grime, but she surprised fans on the London leg of her Formation World Tour when she threw down some amazing moves to Skepta’s hit “That’s Not Me”. Queen Bey, who was performing to a sold-out crowd at Wembley Arena, switched up her dance routine while singing “Diva” and shut it down. “You looked amazing at Wembley last night @Beyonce wish I was there with you,” said Skepta on Instagram. It was rumoured that Beyonce was planning something special for her London show on 2nd July and she didn’t disappoint – becoming the latest big international artist to show love for grime.

5. Novelist says it loud and clear

The scene has never been afraid to speak out on issues and 2016 was no different with Skepta talking politics and Stormzy sharing his views on the Syrian conflict. Another vocal MC is Novelist who kicked off the year with “Street Politician” aimed at the government, took to the streets of Central London alongside thousands of others to raise awareness for #BlackLivesMatter campaign and to speak up on police violence. Seen amongst the crowd with his sign, simply reading STOP KILLING THE MANDEM, Novelist showed his support and went further then lyrics and beats in his efforts.

2016 was THE year for Skepta – as well as performing across the globe, featuring the every publication going and dropping his highly anticipated album Konnichiwa in May, the BBK frontman had the honour of picking up the Mercury Music Prize for the aforementioned project, beating the likes of David Bowie, Radiohead and Kano in the process. The celebration encapsulated the moment perfectly, with Skep’s mum and family dousing him in red wine as he just smiled. When he finally went up to accept the award, he was surrounded by the people that helped him get to where he is and was gracious in his win; “I’m just so thankful. I’ve been trying to do this music stuff and work it out for so long“. I think we can all agree he’s found the winning formula.

Adele showed her love to one of her “favourite artists” when he shouted out Stormzy live on stage during Adele’s recent show in London. The rapper, who is a huge Adele fan, went to see her perform at The 02 on Monday and was shocked by the response he received. After tweeting about his plans to see the show, Adele dedicated “Make You Feel My Love” to him with the sentiment “I want to dedicate this song to a guy from Thornton Heath, South London, aka Stormzy. I hope you have such a great time” and even sent him a handwritten note inside the official tour programme. The MC kept his fans up-to-date with his experience on Twitter and Snapchat, where he posted videos of himself singing every word to her songs.

This year’s MOBO awards was somewhat of a rollercoaster when it came to our TVs this November. The night saw the MOBO Awards be more inclusive of the whole scene then ever before with performances from Section Boyz and Fekky to awards for Lady Leshurr and Kano. However the night will probably become stuck in most people’s memories to a mistake made on live TV. In the category for Best Song, the winner was announced as WSTRN while the backing music played “Robbery Remix” and the camera panned to a confused Abra. The situation was cleared up later in the night by hosts Ricky and Melvin but was just another reminder about the perils of live TV and lead to a backlash from viewers via social media.

9. Drake turns up with the Section

Drake has been popping up all over the UK radar in 2016. As well as his chart domination with Views, he has been popping up with pictures with Risky Roadz in Canada and Bonkaz in the UK and dropping remixes of Dave [“Wanna Know“] on his OVO Sound Radio show. But back in February, when Drake stepped out as a surprise guest at Section Boyz’ Village Underground show, the crowd went MENTAL.  Earlier in the night, the Toronto rapper had joined Rihanna on stage at the Brit Awards to perform her single “Work” with her. Clearly a massive fan of Section and the scene, Drake turnt up with the best of them and showed how much he loves it.

Now Wiley is the the Godfather, we all know that. And in 2016, his name became much more as he promised us his latest album, Godfather, in July. However the date has been pushed back and back [latest update: January 13th]. This didn’t mean that we didn’t get new music with a string of releases from “Bring Them All/Holy Grime” and “Can’t Go Wrong” to “6 In The Bloodclart Morning” and “Speaker Box“, showcasing his range of talent and what we can expect from the project when it eventually drops. A touching moment came back in November when Wiley tweeted about his knock in confidence due to some admissions from friends about his direction in music. This friend told Wiley that he’s not “Skepta or Stormzy” and even saying that he couldn’t finish the album and that it “couldn’t be done”. In such a time, it was great to see the likes of Discarda, AJ Tracey and Skepta amongst others support the E3 don and show him why he is the man.

Overall, this year will be remembered for the amazing work that all of our artists have put in over the past 12 months and the projects they have created. The year produced some fantastic albums and 2016 was figure-headed by four incredible pieces of art. We have already touched on the impact of Skepta‘s Konnichiwa in May but two months earlier, we were blessed with Kano‘s Made In The Manor. The project spawned hits like “3 Wheel Ups” and “This Is England” and was an authentic and raw sound which saw him hit number 8 in the UK album charts and a MOBO Award for Best Album. The year also saw a masterclass in storytelling from North London’s Wretch 32 and Growing Over Life bagging him a 5th spot on the UK album charts and the Landlord Giggs showed that he is very much still the man with his latest album, which led to an epic headline show back in November. Of course we had releases from the likes of Frisco, Little Simz and plenty more too – it was the year we had all been waiting for!