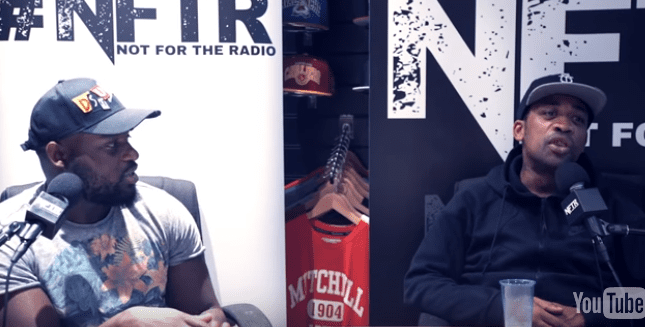 With his forthcoming album shortly arriving entitled Godfather, the Godfather himself – Wiley – decided to grace us with a second appearance on NFTR in quick succession. None of us were complaining and as always, the grime immortal gives a direct, frank and uncompromising insight of what he thinks of various topics.

Below are 11 key things we learnt from the interview. Watch the full interview right here.

Kicking things off by stating that he enjoys playing the role of “Puff Daddy”, Wiley still sees it as his responsibility to motivate his younger peers. There are many MCs around him that don’t believe they have it in them to make it in this tough and unforgiving industry. The Eskimo don therefore likes to inspire self-belief. He admits that he doesn’t always like taking the credit for pushing people’s careers and putting them on, but ultimately he does accept his influence has been crucial for many and as a result, he will not stop playing a part in nurturing talent.
2. Wiley lives for music… but finds the PR stuff a bit naff
He’s a self-claimed “studio rat”,  so doing the necessary bits outside of the studio, aren’t really his bag. If he had it his way, his mind would only be set on music and the stuff that comes with it would be brushed aside. However, with all of his experience in making hits and the commercial avenues that come with it. Wiley recognises how important doing radio and other tedious interviews (obviously not NFTR) can be. The Godfather is honest in admitting that all serious UK artists, will always be mindful of their need to make money from music, especially in London.

3. Wiley is fan of Shola Ama…and the “peach” emoji.
Having always been a fan of the demure singer, Wiley confesses that he spotted Shola Ama one time on a night out in a dress that he humorously compared to the “peach” emoji. The Godfather was eager not to give too much away, in terms of possible tactics (or DM sliding)…but did admit once upon a time he felt she was out of his reach. He was eager to reiterate that he isn’t saying she is in his reach now, but he is obviously a far bigger household name in 2016 than in his earlier grime days.
4. Wiley wants Chip and Yungen to bury the hatchet.
Recalling the days when the two artists were both in tune with each other, singing “go down south” from the same hymn sheet… he wishes things would go back to how they were. Defending Yungen, Wiley explains that the artist had little choice but to react in the way he did when confronted – but advised him to never roll one man up in the future.
5. Wiley thought Crazy Titch and Dizzee were about to die
Wiley reveals the main thing that was going through his mind during one of the most historic shouting matches in grime history. When Crazy T and Dizzee Rascal had their infamous squabble (where Dizzee felt Crazy T mugged him off by deliberately not passing him the mic) all hell broke loose and Wiley was one of the key mediators between the two of them. However, what a lot of people don’t know is how high up they all were. The Godfather was worried that if one of the MCs swung for the other, either or both artists, would fall off the roof.
6. Wiley is independent but has a distribution deal with Warner Music.
Although he has always known the importance of making music that is 100% real, Wiley now believes more than ever in the value of following a niche lane that resonates with your fans and sticking to it. Wiley even cites Dizzee as a great example of someone who has done this exceptionally, or in his words “better than anyone else” .

7. Wiley is proud Ice Kid and Chip did a song together
Back to Chip again… Wiley is happy to see he is on good terms with Ice Kid. There was a fear that Ice Kid – unexpectedly representing an opposing team in the Red Bull Culture Clash could cause animosity, but the Godfather is glad to see this wasn’t the case. Talking about their track together he describes it as “savage”.

8. Wiley believes there is only one classic grime album
Naturally with a lot of Wiley interviews, Dizzee’s name is bound to come up. Both are viewed by many as two of the leading stars, at the forefront of the current scene we have today. As most of us know, for underlying reasons, both are not on the same terms that they used to be. Nonetheless, what is always great to see is how Wiley is able to put his feelings to one side and look at a situation honestly. When asked what albums he believes are classics he only had one answer to give: Boy In Da Corner.
This caused much debate in the NTFR studio, with both Posty and Duane Jones throwing in their pennies worth. Wiley however really believes Boy In Da Corner stands out on its own. Although he rates Home Sweet Home by Kano highly, he feels BIDC was “the bible” which all artists had to follow. Adamant that no other grime album in the past, including any of his own, compares to it – he then admits he may be slightly biased, as he was standing next to Dizzee at the time. Wiley follows this up by explaining the term “classic” is subjective. To him Dizzee, stabbed 5 times, embodies the pain on the album that all grime fans to this day still connect with.

9. Ghetts is slyly the best right now in his opinion.
With all the talk of who has the best, or will release the best album of 2016 (with a strong list that includes Skepta, Giggs, Kano, Stormzy, Wretch 32 and of course the Godfather himself) Wiley was quick to point out that actually in his opinion, Ghetts right now is slewing everyone. If anyone wants proof of this, he urges you to watch him live.
10. Wiley likes London, but doesn’t like the extortion
Wiley is a smart guy. He believes buying in London is kind of a mug’s game in comparison to other places, whether it be elsewhere in the UK, or somewhere like Cyprus. To back this up, Wiley explains he bought a 3 bedroom house with a swimming pool for £140,000. This is a madness when you compare it to London prices!
11. Finally, Wiley really really hopes Spurs one day win the league
This is a sore subject for the Godfather, as he felt last year was the blue and white army’s best chance of winning the premier league. As they came up short when trying to keep pace with Leicester…He isn’t holding his breath this year.