GRM Exclusive: 11 Times Nadia Rose Proved she deserves to be at the top 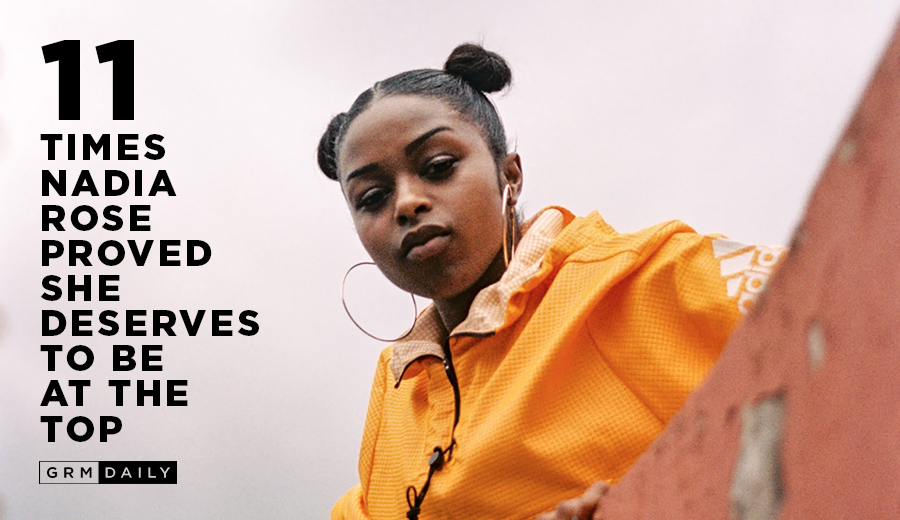 Between 2015 and 2017, Nadia Rose was on a Roll. She was like a sweet treat everyone couldn’t get enough of. The labels went into bidding wars for her, fans scrambled for Nadia Rose related content, and many artist’s wanted to collaborate with the Croydon native. During that period, she had the attention of the world.

After the release of her critically acclaimed EP, Highly Flammable in 2017, there was a lot of anticipation for her debut album. Sadly, the spotlight around her slowly dimmed due to a toxic relationship with her label. She could barely keep her audience engaged — at least not in the way she used to.

However, it’s a new era for Nadia Rose who is now free from the shackles of a bad label relationship. She has taken control of her career and is stepping on the gas until she gets to where she should be — the top. So far, she has released new music, launched her own label (Qwerky Entertainment), and released a mobile app to keep her fans entertained.

Although some might have forgotten how much of a fire spitter Nadia Rose is, she remains a bomb ready to go off at the sound of a sick beat. To celebrate the release of her new EP First Class, we’ll be highlighting 11 times the rapper proved she deserves a spot at the top.

“Skwod” is Nadia Rose’ most successful song to date. Released in 2016 when she was a newcomer, it defined the early stage of her career, helped recruit her first set of fans, and even won her a MOBO award. The intriguing elements of the song are the playful lyrics, unforgettable hook, and smooth rhythm. Meanwhile, the music video acts as the icing on the cake.

Toddla T was all smiles as Nadia Rose killed his beat during this freestyle. In that moment, the he seemed like the happiest man in the world. This freestyle features the rapper at her best and one can’t help but watch her spit on repeat.

Usually, Nadia Rose is a playful rapper and wordsmith. The death of her grandma unlocked a different side of her. Recorded with MCTV, this freestyle was dedicated to her grandmother and featured conscious bars about her family, her roots, and her goals.

Rap fans are always eager to see how female rappers perform in situations where they have to create with their male counterparts. In this case, Nadia Rose didn’t disappoint as she proved she can hold her own even in a room filled with drillers like LD, Monkey, Dimzy and Liquez.

“Fire In The Booth”

Nadia Rose definitely brought fire to Charlie Sloth’s Booth and left him impressed. The two-part freestyle is an example of how entertaining Rose is, and how raw she is with the braggadocios bars and rhymes.

“The Intro” is the opening track on her debut EP and an insight into what she’s capable of. Although a short track, its packed with all the elements that fans love about her. It shares similar themes with her MCTV freestyle, where she’s focused and her lyrics are deep.

“Voice Of The Streets” Freestyle

During this session with Kenny Allstar, she hopped on his “Tracksuit Love” beat and dropped bars that had him wishing she was featured in the remix of the song.

Over the years, Nadia Rose has delivered some striking choruses and this song features one of her best. Her ability to create choruses that resonate with pop and hip-hop listeners can most definitely felt on “Airplane Mode”.

Clearly, the British MC can’t be boxed in. Her collaboration with Kideko and George Kwali is a testament of her versatility. This was the first time she contributed to a dance song. Of course, since then she has created more songs with techno and dance producers, her most recent being “Secure The Bag”.

After quite an interesting year in 2015, Nadia Rose decided to end the year with a boom titled “Boom!”. This was released after a year of positive feedback from critics and a warm welcome from her fellow leading ladies, like Etta Bond.

This particular song features Nadia Rose rapping about what this entire article is about. It was released after a short break from the limelight. With her lyrics, she sends a message that she’ll always “come out on top”.

Be sure to check out her new EP which dropped yesterday below right now!