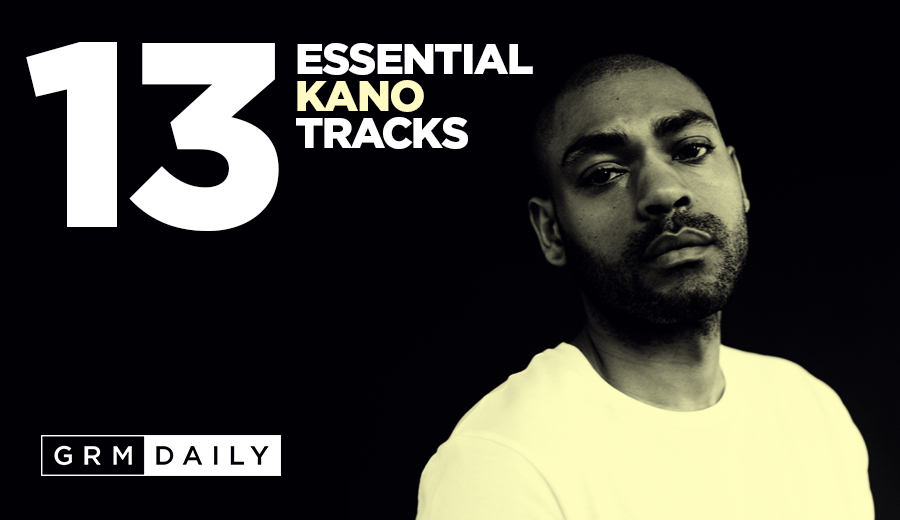 As Kano gears up to drop his highly anticipated sixth studio album Hoodies all Summer, GRM Daily have taken a look back through his career to celebrate some of KA’s most essential tracks. With just a few days until we’re blessed with new music from the East London MC, it’s time to prepare and add these monumental tunes to your playlists as we wait for what will undoubtedly be an album worth honouring.

“P’s and Q’s”, one of Kano’s most well-known tracks, and quickly became a fan favourite from his debut Home Sweet Home album. With an indisputably hard instrumental, Kano brings the energy executed with a tight flow propelling the East London MC into the Grime mainstream back in 2005.

Kano is known for experimenting with different styles, interweaving genres and twisting tones. “Reload It” is a prime example of this craftsmanship. Mixing pirate radio roots with Dubstep themed drops the Diplo-produced track was the first Drum & Bass infused piece that KA dropped. It’s no surprise with it sounding as good as this he’s gone back and used this combination multiple times throughout his career.

Home Sweet Home comes through with elements of Rap, Rock, Garage, and Soul, but ultimately the 16-track project is a Grime album and this is one of the tracks that really showcase this. Featuring Ghetts (or Ghetto as he was known back then), the pair play up to the gritty production to bring us a boundary-breaking banger.

Featuring and produced by The Street’s frontman Mike Skinner, Kano’s stripped back his hard lyrics for some more heartfelt bars with “Nite Nite”. With soft, catchy vocals from Leo the Lion on the hook, Kano ruminates on a teenage love whilst securing each and every listener’s hearts in the process.

“This Is The Girl”

Straight off the back of his debut album, Kano dropped London Town. The 11 track album saw Kano continue to experiment with different styles and sounds, leading him to link up with Garage star, Craig David. It was no surprise that “This Is The Girl” became London Town’s biggest hit with its R&B themed lustrous lyrics over a bouncy production.

One of Kano’s greatest but most slept on tracks is “Layer Cake”, featuring a clip of Michael Gambon’s speech from the 2004 film Layer Cake. The simple instrumental allows Kano’s lyrics to take centre stage as he goes deep into delivering some of the hardest bars we’ve ever heard from the East Ham MC. Touching on the struggles you face as an upcoming artist, his bars more than serve their purpose.

Over Treble Clef’s famous 2004 “Ghetto Kyote” instrumental, Kano was one of many in the game including Dizzee and Devlin who took a whack at a freestyle over the popular beat. As one of Kano’s early freestyle he bodies the legendary track sounding undeniably raw, original and British; it’s no surprise it’s still racking up huge numbers on YouTube.

Released one year after his second album London Town came Kano’s third studio album 140 Grime St and it’s clear why “Hustler” took the limelight as the projects lead single. With it’s urgent-sounding instrumental perfectly combined with smooth vocals, Kano once again proves himself to be a contender for being the best MC in grime.

The biggest stand out track from Kano’s fourth studio project Method to Madness has to be the Chase & Status produced track “Spaceship”. With the typical C&S catchy dubstep baselines hidden beneath Kano’s delivery, he once again came through proving his versatility and it was everything that anyone wanted from a track back in 2010.

With it’s cold instrumental and old school garage feel, “GarageSkankFREESTYLE” was originally dropped as a single before Kano released it as a bonus track on his 2016 Made In The Manor masterpiece. Involving fans in the visuals, the fresh flow of Garage Style can get a crowd reaction like no other track.

Back to his dubstep flavours that were first introduced with “Reload It”, “Hail” is the huge introduction to Kano’s 2016 Made In The Manor album. With undertones that roar like guitars, a striking baseline, and synths that could rival those of acts like Pendulum and The Prodigy, KA introduces himself as “King of this shit” and he’s not wrong.

“New Banger” is exactly what it says it is. With lyrics such as “So if this ain’t that shit to gas up Britain, forgive me, for I am a sinner” and “Done the debate and I am the G.O.A.T” Kano comes through with an unmatched brass audaciousness backed up with hard beats, cleaver witticism and a buzzing bass, undoubtedly proving his ability to put himself on that pedestal.

Kicking off with the most unforgettable introduction of the century (so good you’ll NEED to wheel it up three times), Kano is joined by industry legends Wiley and Giggs. Going toe to toe the trio combine for a deliriously exceptional display of lyrical greatness. The track is a pure celebration of UK MC culture infused with grandstanding orchestral backing.

With five legendary albums, a string of mixtapes and singles under his belt, 13 tracks don’t even begin to scratch the surface of the London MC’s contribution to the music scene. With bangers upon bangers, bars on bars, we can only suggest you go back and listen to more of renowned artists catalogue to really appreciate his artistic glory in full.