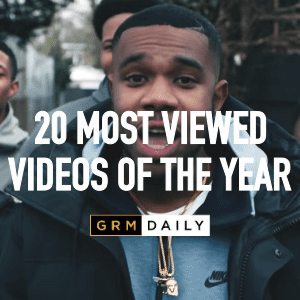 Building off of a huge 2017, 2018 was another stellar year for our channel which has seen us surpass the heights we had previously reached. But before we move onto next year, it’s only right that we go back and look at the most viewed videos of this year, which in many ways are moments in themselves. So without further ado, we present to you the 20 most viewed GRM videos of this year (view counts were accurate at the time of writing), which will also double up as a wavey playlist.

To kick things off we have the young South London artist EO, formerly a Youtube star, who’s seminal track “German” produced by JRocs reached a whopping 34 million views (at the time of writing). The track was released early in the year, but went on to become the British summer anthem with its ever so catchy hook and light production. We’re sure when many of you listen to this track you will hark back to the summer nights of 2018.


Second up we have another appearance from EO, only this time as a feature on AJ and Deno’s track “London”. Produced by DaBeatFreakz, this track showcases three of the most promising burgeoning vocalists that our beloved capital has to offer. AJ and his frequent collaborator Deno first came to fame with his playground singing videos and compilations. This track boasts 23 million views.

Next we have East London’s Ramz who’s rise to fame came with his gigantic track “Barking” released in late 2017. Not quite as big as his first seminal track, but still clocking in at an extremely impressive 22 million views is Ramz’s track “Family Tree” which was produced by Fraster T Smith & 169 and released in April of this year.

The fourth most viewed GRM video of the year comes from Swarmz and clocks in at 16 million views. Released early in the year during April, this hook dominated track was another summer banger. The Greenwich based rapper come to prominence with his huge track “Chitty Chitty Bang Bang”, and very much hit another home run with his GRM debut track “Lyca” which would go on to be remixed with Yungen and NSG.

Coming in at number 5 is Geko and the aforementioned NSG with 15 million views. This track is very much in the sonic mould brought to the forefront and championed by the likes of J Hus and Mo Stack, and is produced by one of the sound’s architects, the serial hit maker Jae5. The video for this track features a car wash with some pretty nice looking customers.

With his second appearance on the list, burgeoning vocalist Deno Driz collaborated with South London rapper Cadet in August for this absolute anthem entitled “Advice”. This is a real feel good track, with a sick back and forth style between these two talented artists, both of whom appeared as actors in Rapman’s “Shiro’s Story” videos, which Deno makes reference to in the track. “Advice” also clocks in at a whopping 13.4 million views, despite it only being out from the end of August.

Another giant track released in April this year was Afrobeat artist of Congolese descent ZieZie’s “Fine Girl”. At 12.9 million views, the popularity of this South London resident’s track led to it being remixed with features from fellow South Londoners Belly Squad, and Essex representative Berna.

One of the breakthrough artists of the year, South London rapper DigDat came through with one of the drill anthems of the year – “Air force”. Football bars, numbers bars, and too many punchlines to mention, combined with a wavey flow, and a greazy instrumental from CZR Beats.  “Air force” has racked up 11.4 million views in just four months since its release.

Young female vocalist Amelia Monet teamed up with EO in July for “Baddest”, for EO’s third appearance on this years most viewed list. This wavey track also went on to get a remix, featuring the aforementioned Cadet, as well as fellow South Londoners Skengdo and AM. “Baddest” clocked in at 11.4 million views since it’s July release.

Next up at 10.8 million views is Digdat’s close affiliate Unknown T, another of this years breakthrough acts, with his anthem “Homerton B”. Unknown T stands out with his original flow over this hard hitting instrumental produced by ChubzTP. We suspect that we will see a lot more from Unknown T and his affiliate DigDat in the year to come, and hopefully he can build on this huge August release that had the streets buzzing.

This track saw Black Butter records’ breakthrough duo act Young T and Bugsey team up with a mogul in the UK rap scene, Fredo – over a snapping Toddla T produced beat. As per usual Fredo delivers a series of sick verses and we get a  killer hook from the duo; which makes this song an instant banger, not to mention the hot vid matching Toddla’s spicy tropical riddim. Released in July, the track now has 9.9 million views.

Also breaking the nine million views barrier (9.6 mill) was this massive collaboration between vocalist Yxng Bane, and D-Blcok Europe’s Young Adz and Dirtbike LB. This track demonstrated the D-Block boy’s versatile musical ability as they stood toe to toe with one of the most popular vocalists in the contemporary UK R&B scene. Named after one of the Godfathers of trap “Gucci Mane” has a floaty drum filled hip-hop beat produced by Nyge as the D-Block Boys and Bane lay some braggadocios lyrics on the track.

2018 was a huge year for the West London rapper Fredo, who has emerged as one of its leading figures in the UK rap scene. This year saw him release the project Tables Turn, on which the popular track “Rappin’ and Trappin'” was the opener. Gaining 9.4 million views since its release in January, this well known street banger is a demonstration of the heat Fredo exudes.


Few artists have had a bigger year than Ambush. He came through with the absolute anthem of the year with “Jumpy”. GRM Daily were lucky enough to bring together an insane remix with grime legends and fellow north London representatives Skepta and Chipmunk in July.  In a few short months since its release it now boasts 7.7 million views. GREAZE!

South London have really Killed it with the views this year, and Belly Squad were some more of its residents who achieved an impressive level of popularity with their track “Missing” featuring Tottenham’s Headie One reaching 7.6 million views. Some greazy verses and a catchy hook are laid by the Belly boys before Headie joins in the middle of the track bringing a cool laid back nonchalant flow, before the final chorus sees it off.

With their second appearance on the list the D-Block Europe boys Young Adz and Dirtbike LB came through with the braggadocios banger “The Shard”. A nice trap beat with some smooth flows sees the D-Block boys ball out in the video for this track which was released in January, and has gained 7.5 million views over the year; further proof that 2018 has really been D Block Europe’s year.

South London punchline kings Krept and Konan, drill star Loski, and vocalist ZieZie were recruited by afrobeat duo ill Blu.This tropical banger is a blend of the afro-swing genre with hip hop and perhaps a hint of pop. In only four months it has amassed a whopping 7.3 million views.

M Huncho’s hard summer banger “The Come Up” is next on the list which has reached 7 million views this year. Produced by Quincy, this slower and softer trap instrumental is absolutely killed by Huncho with an almost Young Thug like flow, and fire bars packed in his verses.  M Huncho was deffo one of the year’s biggest artists and he’s sure to have an even bigger 2019.

Released in earlier in the year in February,  South Londoner Koomz switched up his m.o. with the hit track “Mariah”. A love dovey afro-swing rendition, Koomz really hit a humdinger with this track, which has been viewed 6.7 million times to date. The track would later go on to receive a remix from one of afro-swing’s godfathers; fellow South Londoner Sneakbo.

Last but not least, clocking in at 6.3 million views is another tropical banger coming from NSG and featuring one of the waviest artists of the moment, Not3s. This jumpy track with its wavey hook is the perfect party record, and a great way to seal off the list with NSG’s second appearance and Not3s’ first.