7 of the best moments from Loski’s ‘Mad Move’ 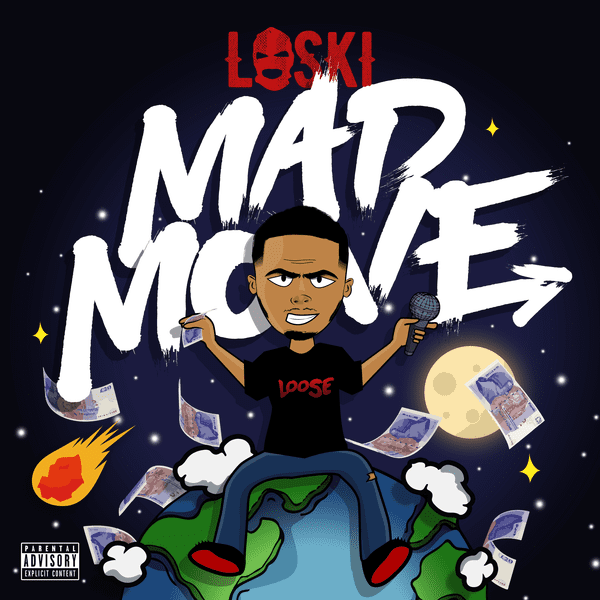 At the beginning of March, Loski released his highly anticipated mixtape Mad Move. The project marked his first since the release of Call Me Loose which cemented his reputation as one of the best of young artists who is pioneering and leading the drill influenced sound into the mainstream.

Tracks like “Forrest Gump” and “Cool Kid” were early samples of Loski’s ability to play with radio-friendly sounds and Mad Move again proves this versatility; while simultaneously showcasing Loski’s ability to keep the streets fed with drill bangers and op bashing tracks.

At 12 tracks long, Mad Move is Loski’s gift to his fans and he keeps features on the tape minimal in order to showcase his individual sound; something he has done consistently outside of his belonging to the Harlem Spartans collective.

The project features the already released tracks “Boasy”, “Calm Down” and his link up with DigDat, “No Cap”. Check out the video to “No Cap” below.

After careful listening, here are seven of the best moments from Loski’s new mixtape, Mad Move.

Mad Move opens with the track “Big Man” and the track is the perfect project introduction. Within seconds, listeners are greeted with confident and cheeky bars, a style that Loski has consistently kept up throughout his catalogue of tracks.

The opening line “Big man don’t @, keep it moving on, don’t be moving wrong, I’ll do your don” is the perfect bossy one-liner that calls out social media trolls and keyboard warriors with catchy lyrics that make the chorus to this track memorable and relatable. Loski later boasts, “designer attire, they know the kid, I’ll do the drill in my Louboutins” and the line highlights the contrast between life on road and life as a star; a contrasting lifestyle which Loski Loose frequently reminds listeners in his lyrics that he often mixes.

2. Loski proves his passion for popular culture on “Calm Down”

Loski released “Calm Down” at the end of last year alongside clean visuals which you can relive below. The slow yet track features some of Loski’s best wordplay and lyrical skill. The line “might go bang it, attack it, we love passa. Ric Flair drip, my diamonds, they look . Baller like I’m Kaká, shotta, I’m not ”, makes use of three popular culture references that fit perfectly into Loski Loose’s rhyme scheme. Ric Flair Drip shouts out the WWE star who was name-dropped on the Offset and Metro Boomin track of the same name, Kaká celebrates retired Brazilian attacking midfielder Ricardo Kaká and the 2002 cult classic Jamaican crime film Shottas; a film Loski has referenced previously on the track “Teddy Bruckshot” which is taken from his previous release Call Me Loose.

The track also houses the line “Don’t talk about on me, I rock hella” which is destined to be an Instagram caption.

Fashion is referenced repeatedly on this project and “Boasy” is not an exception. Similarly to “Big Man” where Loski details his mixing of road life with riches, Loski spits “drill in goose fur or Bape, I don’t care”. The young rapper is adamant throughout the mixtape that he is always dressed to the nines; whatever the activity.

Loski isn’t shy about the women he attracts either, the rapper boasts the line, “moonwalk on my wrist, only right that she glance”– illustrating that his designer lifestyle is, in fact, drawing in all of the female attention that you’d expect.

The reoccurring theme of fashion takes precedence on the track “Fashion Avenue” and the lifestyle he details will be aspirational to many. Loski sings, “I’m stuck up in a Fashion Avenue, I’m pouring Belaire, never Malibu. Gucci, Moncler cost a bag or two. move, Barbie dem love me, I cannot choose”. The line contains all of the elements of the fantasy that rappers frequently present to us,  the luxury lifestyle centred around wealth, alcohol and women and “Fashion Avenue” is the track on the album that suggests Loski is in a good space and enjoying the perks of this lifestyle.

Later Loski calls out those who don’t measure up to his swag with the bar, “whatever we say they copy but can’t cop the swag cos they don’t mash properly”. Evidently, Loski’s uniqueness and individual style is one that he has earned and cannot easily be copied.

4. Loski declares, “Real niggas put me on their playlist” on “DBD”.

“DBD” is a confident and hard-hitting track that appears at the near end of the tape. Loski addresses many with the lyrics in this track including his girl, haters and ops.

Loski asserts his confidence and belief in the quality of his music with the line “real niggas put me on their playlist” and his self-belief is an evident and consistent theme throughout the mixtape.

With the standout line, “I told my girl if you with me you’re the chosen one. If you fuck up once, I’ll be more than done”, Loski is relatable to most with his approach to trust and relationships. “DBD” has a reoccurring theme of presenting scenarios where it is possible to be made to look stupid and with the above line, Loski outlines that a relationship is one of many that he will not allow.

5. Loski shouts out J Hus and Drake and talks basketball on the summer-ready anthem “Something New”

“Forrest Gump” saw Loski sing and prove his versatility; Loski proved he was capable of drill diligence but also melodic singalong tracks and “Something New” follows in its footsteps.  The track is club ready and features bar laced verses along with a catchy chorus.

Loski references cosign from Canadian artist Drake with the line, “I got gyal saying “splash”, I got Drake saying “Mad Move”…” and he also shouts out J Hus with the lyric, “Did you see what I , like J Hus and Jae5”. The line might just be a play on words or it could be a subliminal message that may arrive soon.

6. Loski does the “Taxman Challenge” on “Full Stop”

“Full Stop” hosts some of the best wordplay on the mixtape. The track sees Loski drop bars consistently for the entirety of the three-minute track. The Kennington hailing rapper makes use of violent imagery and boastful lyrics about his evident talent and street dominance. He proclaims, “all this money got me bragging, big addiction up in Harrods. My accountant gives advice but I don’t listen, I keep splashing” and later “I don’t do the mannequin, I got a tax man challenge”.

The lines incorporate humour and Loski’s success and financial gains.


7. Loski takes a shot at Arsène Wenger on “Live Like That”

Loski samples his own hit “Forrest Gump” on this track and details pissing off his ex. The track is afro-bashment influenced and is certain to be his next hit. The track calls out pagans and Loski addresses them throughout the track, notably with the football-themed line, “Arsène Wegner, they can’t manage, what happened? I thought you ”. The scrutiny and criticism Wegner received whilst he managed Arsenal football club is a clever cultural reference to use to address Loski’s critics and enemies- they too lack skills.

ShaSimone Guests On Latest Episode Of 'HC Pod' with Chuckie