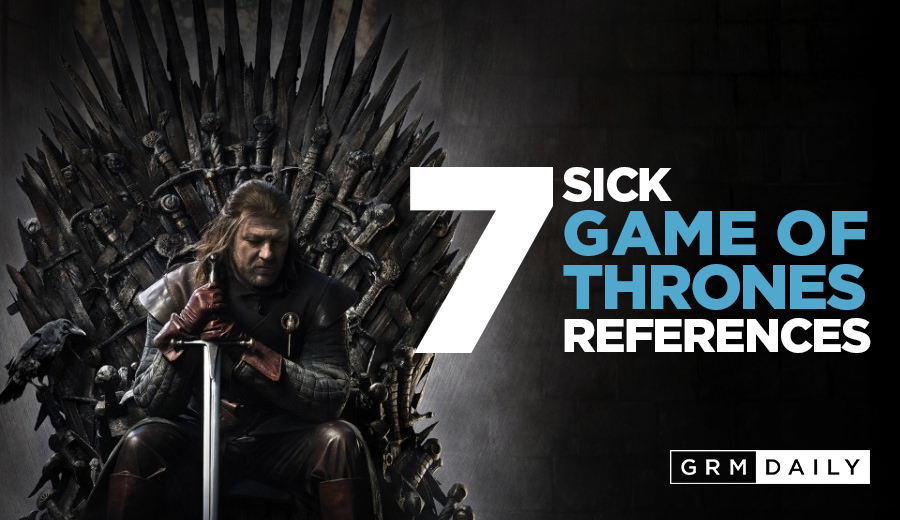 If you are a Game of Thrones fan, you would have been bracing yourself for the shows epic return this evening in the UK, or the true diehards would’ve watched it in the early hours of this morning. The series is expected to draw to an explosive end, with each episode set to have run times exceeding the hour mark.

It has been touted by many to be one of the greatest television shows off all time, and it has garnered a huge following and impact within wider culture. Among some of its fans are a myriad of music artists, and notably some British and American rap artists who at times have made reference to the show in their lyrics.

With the premier of the final season upon us, we thought it would be a good idea to look at seven of the sickest GoT references.

White Walkers are devoid of feelings and empathy, or so we would assume from what we have seen of them so far, although they remain somewhat shrouded in mystery. Furthermore, “Winter is Coming” is the house motto of the Starks, the house whom Jon Snow belongs to.

“White Walker with the feelings

Jon Snow with the flow

You know winter is the season”

This is a reference to one of the shows main characters Jamie Lannister, who literally lost his right hand in season three episode three ‘Walk of Punishment’ after it was severed by Locke.

However, what Jaykae is actually referring to is the loss of the rising star and fellow Birmingham MC Depzman, who sadly passed away aged 18 after a fatal stabbing in September 2013. Depz was a prominent member of the Invasion Alert crew and a right hand man to Jaykae.

“And trust me, man I know what I’m saying I lost my right hand like Jaime Lannister’s”

Ghetts absolutely slays this verse (pun intended), as he makes reference to the leader of the White Walkers known as the Night King; who at the end of season seven resurrected one of Daenerys’ fallen dragons, a real game changer in the series.

“We’ll ride on whoever’s bangin
Night King, I take the juice out the dragon
Might swing, and make a human a cabbage”

From an East London rapper, to one from the North West. On the introduction to his debut studio album One Foot Out, ICB CEO Nines makes a reference to one of GoT’s series most classic quotes,  with the Lannister motto “A Lannister always pays his debts”.

One of Manchester’s hardest, and self proclaimed ‘King of The North’ (a GoT reference in of itself), gave the show a shoutout back in 2016 on his track “Mad” produced by the serial beat maker Swifta.

“You can go and tell the king that I’m coming
This isn’t the Game of Thrones, if it was
Then the 01 to the 61’s got a dragon”


What could possibly be a bigger shout out than one from Drake, Canada’s biggest artist and a leader of the contemporary Hip-Hop scene for virtually a decade.

Last but not least, this is probably the most iconic of all GoT references as two greats collab on this colossal anthem. This reference is to Cersei Lannister’s walk of atonement in season five for which she is stripped naked and forced to walk through the streets of Kings Landing whilst being whipped. But Giggs is talking about a different type of whippin altogether…