7 sickest moments from the Rated Awards 2015

As this year’s Rated Awards are fast approaching (theyre on Wednesday!), we’ve decided to celebrate all things GRM and KA by reminiscing about some of the best moments from last year’s inaugural Rated Awards.

The night at the Gracepoint Theatre in Islington featured surprise performances, nostalgic moments and momentous scenes that took years to set up. It was a historic night which showcased all the successes from the past year within the UK rap and grime scenes. Take a loot back at some of our favourite memories.

Little Simz’s performance at the Rated Awards was intense and unique. Simz came to the Gracepoint Theatre in Islington to put on a show. She performed her single “Dead Body” from her album A Curious Tale of Trials + Persons, which dropped the day after the awards. She appeared from behind the excitable crowd to deliver the track’s killer verses.

After Charlie Sloth won the Rated Award for Best DJ, Tim Westwood stepped up to calm Charlie down by saying “don’t get gassed”. Westwood asserted himself by stating he was the best to do it and that his legacy speaks for himself. Presenter Manny Norte addressed the comments even further, by gassing the crowd with a chant of “shots fired!” This was a real awards show moment.

Jevon made GRM history by deservedly winning the first ever #GETRATED award last September. Competing against several other incredible finalists, Jevon’s #GETRATED freestyle was voted to be the best and graciously accepted his award at the Gracepoint. It was great to see a new artist get put on like Jevon was, and with this year’s #GETRATED Competition being so close, it’ll be interesting to see who picks up the prize this year.

On top of Section Boyz’s performance on the night, the group unified the scene in support of their album Don’t Panic, which dropped the same night as the awards. Several artists, including Stormzy, could be seen sporting Don’t Panic snapbacks and acceptance speeches all seemed to feature the award winner saying “make sure you get Don’t Panic at midnight.” The album release signified a huge stride forward for the group that have since be cosigned by Drake.

Kano won the Legacy award at Gracepoint and went on to treat the crowd to a lengthy set of bangers that kicked off with him performing “Hail”. At this point, everyone had left their seats and come to the front of the stage to celebrate Kano’s career and award win.  The Made In The Manor rapper was taken aback as he performed his second song, shouting out GRM’s Posty and thanking him for the opportunity.

Towards the end of Kano’s set, Ghetts jumped on stage and tore the house down in a nostalgic and energetic performance of the “P’s & Q’s” remix. It was, without a doubt, the best performance on the night and left the crowd looking forward to the 2016 Rated Awards before they had even left the building. Talk about energy!

BEING THE NUMBER 1 TREND IN THE UK

Throughout the night, the Rated Awards remained the number one trend on Twitter, cementing the night’s success. The whole scene was supporting each other in the crowd, on the stage and on social media, as fans live tweeted their reaction to their favourite artists’ picking up awards. Don’t forget, you’ll be able to stream the whole ceremony again this year online. 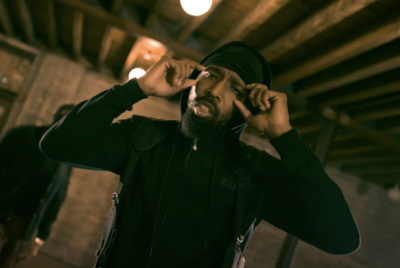