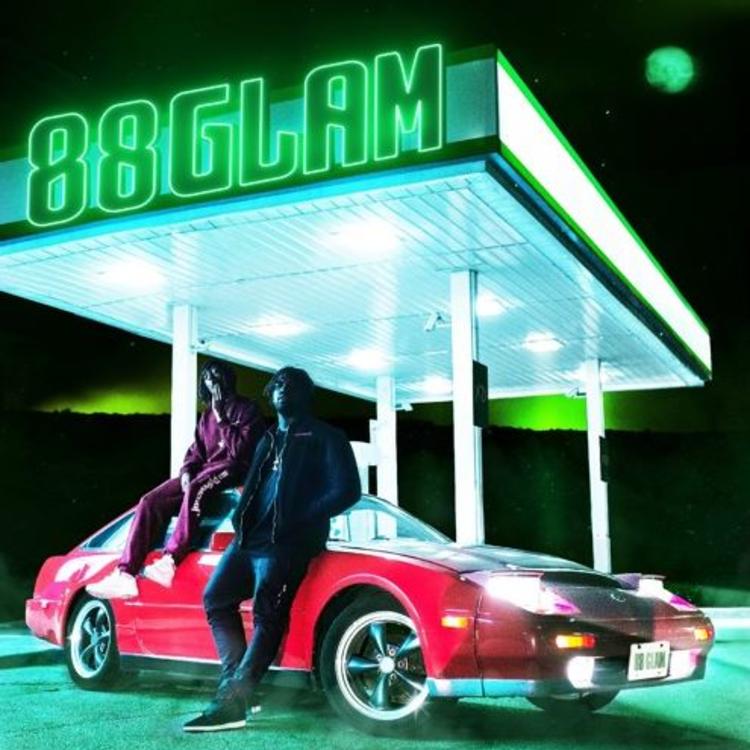 From meeting through parties in the depths of the ‘6’ and embracing the vivacious nightlife of Toronto, Canada to coming on top as one of the biggest, emerging duo’s Hip-Hop has surpassing underground music. 88Glam have used their distinctive talents and innovation to change Toronto’s hypnotic music scene for the better, and there’s no sign of stopping the two vibrant personalities either.

88Glam makes up of 88 Camino (Shakqueel Burthwright) & Derek Wise / Glam Boy (Derek Bissau) whom formed back in 2017. The XO and Republic Records signed duo have accumulated 34 million streams thus far since their journey and are now touring across the world with fellow signed XO imprint rapper Nav.

Finding themselves backstage after releasing unlimited amounts of energy amidst their aesthetic and energy pumping set accompanying Nav’s London Headline Show, GRM Daily connected with the pair to find out exactly how the XO and The Weeknd affiliation came about, taking their career mainstream and what we can expect for the future of 88 Glam.

Undoubtedly, let me just start by mentioning the fact that you both have taken Canadian Hip-Hop to a whole new level. An XO imprint, 2 successful albums & your track “Bali” taking the mainstream by storm, how would you both describe your career thus far?

88 Camino: “I think it’s pretty authentic. We’ve played everything by ear and taken a more natural route. We just wanted to make sick music that we’d want to listen to. We didn’t think all of this crazy s*** would happen to us.”

Speaking on the subject of mainstream, you both had major success on “12” which featured The Weeknd & “Bali” featuring NAV, both highly rated tracks. Reading up on your interview with Billboard, you were almost able to foresee the success of “It’s a Flex” which was forthcoming at the time.  Seeing as you’re so good in all aspects of the future, what can we be expecting from you both soon?

88 Camino: Definitely more music. It’s crazy actually because when we were making “It’s a flex”, I’m not going to mention any names but one producer hated on it and was like “Yo, this song is trash.” It turned out to be a pretty good song.

We have to get on the subject of the XO deal, how did it come about?


88 Camino: So, Derek was signed to them anyway. Derek and me have been friends for years too, making music together way before the whole XO thing. Eventually, we sent an XO manager (Lamar) four songs, which is when he initiated the fact that we should become a duo. That’s what I mean by nothing was ever planned, he just said, “Yo, you guys should become a duo and you guys should be called 88Glam.”

Has this sign to XO had an impact on the way you carry yourselves within the music industry?

“We definitely have to be a lot more responsible and make sure the brand is represented in the most presentable way. We take responsibility of our actions. It’s like being a parent. We try and make the best music possible.”

Let’s throw it back to 88glam & 88glam2, both self-titled bodies of work. Have you seen a transition and growth when comparing the first release to the latest one?

Glam Boy: “For sure. Before we dropped that first album, we were anti, in the streets.”

Make sense, as the kitchen is obviously where all that fire is at (Pun intended). So now, is the kitchen still a place to go to in order to make a certified banger?

Glam Boy: it’s good to go back to your origins and where it was all made, that was the foundation that was laid for us to get us where we are at. We never forget that. We’ll record in a hotel room. We only just started recording in the studio recently to be honest with you.

88 Camino: We’re not so eager to make music in the studio. That was a transition in itself, for us to get comfortable in different settings. We could even just set a mic up in here; it’s wherever we feel comfortable.

There’s no doubt in saying your sound is incredibly distinctive, when making tracks, is there anything in particular you have to have?

88 Camino: The beat. The beat definitely has to be something we can identify with. We are very selective with our beat, which something that distinguishes us from any other artists.

Glam Boy: People’s hearing is so accurate. They know exactly what you sound like. Then again, you can think about it and if you were to think about your favourite artist and you heard a beat, you can easily be like “Yo, that sounds like a Roddy Ricch beat, or a Post Malone record”. It’s so cool though, to be on the receiving end of it.”

88 Camino: I’ve actually been going on YouTube and typing in ‘88Glam type beat’

“Have you ever gone onto a beat and thought ‘Nope, I wouldn’t do something like that’?

Glam Boy: As our sound grows, and we develop more as an artist, we’d want different sounds. Then, it’s not even what people assume what you’d hop on.”

“We’re constantly trying to transcend our sound and we work tightly with our in house producers too.”

What were your favourite moments from making the album & did you face any complications whilst doing so?

88 Camino: There were a lot of complications for me because I don’t like moving around a lot and it takes me a while to adapt to new surroundings. I was new to LA, everything is so spread out and it takes 40 minutes to do one errand. Making 88glam 2 was definitely an experience for us though, we grew a lot and went through a lot of trials and tribulations. We know we can do better and our next album is going to be a lot better. You need experiences like that to become a better artist.

“We’re also cultured. I mean, I am Jamaican and Trinidadian, our backgrounds allow us to link.”

If you were to collaborate with one British artist, who would it be? A remix to “German Whip” maybe?

Glam Boy: Skepta, for sure.

88 Camino: I would say Skepta too. Him, visually, his whole aesthetic is a creative artist. It’s not just his music, when it comes down to his visuals and the way he dresses, it’s the full package. A lot of artists can make a track, but its easy not to get into it because the full package isn’t there.

Does being on tour expose you to different types of music from around the world or do you regularly stick to a set playlist?

88 Camino: I’m often like: “Ok, how can we make the next best thing.” I’m never trying to be influenced by too much otherwise my sound will sound the same. This is the only reason why I don’t listen to too much, I want our stuff to sound as original as possible.

Finally, for our globetrotter readers, is there anyone in Canada or maybe specifically Toronto, on the come up that we should keep our eyes peeled for?

Glam Boy: I like this kid from my hood. His name is Houdini. I like his stuff.

88 Camino: and… K Forest. Have you guys heard of K Forest? He’s an RnB artist and his stuff is very original. He’s a crazy musician. He’s definitely on the come up.

88 Camino: I can already tell he’s going to be a crazy artist and he’s humble. I respect him as an artist.