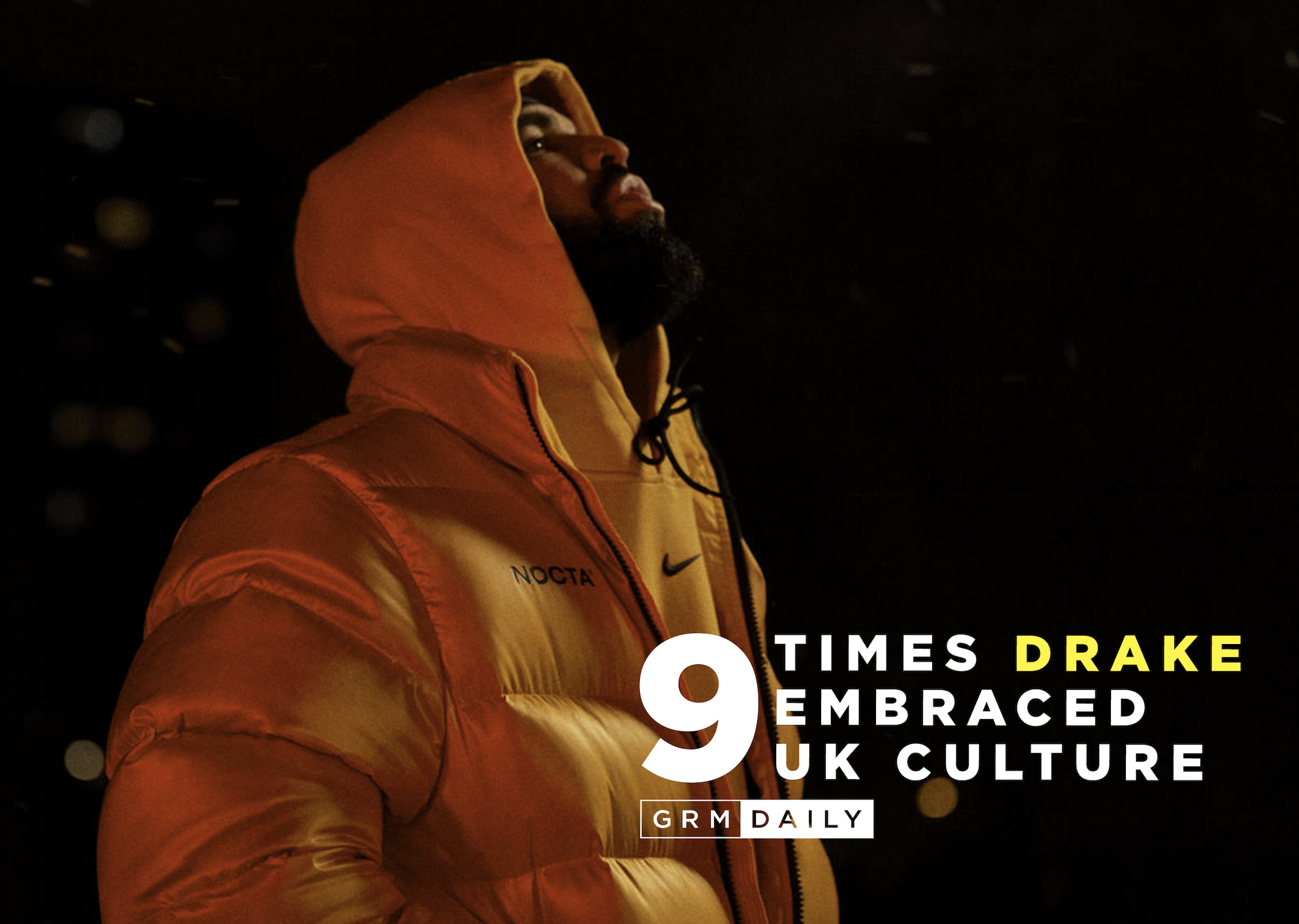 It’s no secret Drake has a special place in his heart for the UK. From samples and cosigns to features and surprise gig appearances, Drake has demonstrated his love for all things British – especially UK rap – countless times over the years.

To some he’s considered a beg; to others he’s a Canadian native deserving of a British citizenship. Regardless of what side you fall on, what can’t be denied is Drake’s close connection to the UK.

To mark the release of his long-awaited album Certified Lover Boy, we’ve rounded up just a few of the many times Drake has shown love to UK culture!

Drake Revealing He Had Been Inspired By Sneakbo’s Early Movement

One of the earliest signs of Drake’s love for the UK came in one of his first interviews with the icon Tim Westwood following the release of his 2011 album, Take Care. During the chat, Drake discussed his tattoos and his mother but a surprise came towards the end of the interview when Drake revealed he had been inspired by Sneakbo’s movement, adding that he even spent some time chilling with the Brixton representative while he was over here.

In a separate interview with presenter and journalist Max, Drake also shouted out Ard Adz and Johnny Gunz, and also revealed Sneakbo actually inspired his approach on “Cameras” and “Take Care” with Rihanna.

Back then intercontinental collabs and cosigns weren’t as prevalent as they are today so Drake’s acknowledgment of the Brixton movement was a huge indicator of not only the reach of underground UK rap at the time, but also its impact on popular culture.

As well as being a supporter of UK rap, Drake is also a fan of the beautiful game and has been spotted with some of the Premier League’s biggest players. In the early days of his career it was speculated Drake just might be a Man United fan after he name-dropped Ruud van Nistelrooy on “The Presentation” and linked up with Rio Ferdinand in a Red Devils hat and jacket for an interview.

However, since then, Drake has gone on to pose with the likes of Didier Drogba and Daniel Sturridge, with Ferdinand even jokingly calling him out on his switch-side antics back in 2015. Will we ever find out what team Drake really supports? Who knows!

In 2016, Drake’s love for the UK reached new heights when he released his huge single, “One Dance”. The song samples Kyla’s iconic “Do You Mind” and allowed Drake to shout out another element of British culture (UK funky house) while simultaneously proving his love affair with Brits wasn’t a new thing and goes all the way back to the noughties.

“One Dance” definitely proved popular with fans over here as Drake earned his first ever solo UK Number 1 Single with the song, which went on to appear on his summer LP Views.

Even before Dave was the mega star that he is today, he was grabbing the attention of big names in the music industry. Among the people who saw his potential early on was Drizzy, who linked up with the south Londoner to remix the catchy track “Wanna Know”.

We can always rely on Drake to provide us with some quotables and he did on this huge collab, ending his verse with: “I got UK tings on the WhatsApp now, like +44 on the code” – a slick reference to the UK calling code, as well as his life as a casanova.

Fresh off the back of performing with Rihanna at the 2016 BRIT Awards at the O2 Arena, Drake then headed straight to Village Underground in Shoreditch with Skepta on the same night to shut things down at Section Boyz’s (now Smoke Boys) headline show!

As you can imagine, the crowd were shocked but definitely not disappointed as Drake went on to perform his hit “Jumpman”, before hanging around while the Smoke Boys kept the energy levels high with their own bangers.

Not many artists can say they shut things down at the O2 and an intimate gig on the same night and the fact Drake did proves that he’s a superstar who still has his ear to the streets.

Following the release of his 2017 LP More Life – which featured the Giggs-assisted banger “KMT” – Drake spent a lot of time over here in the UK and we saw him link up with Hollowman on many occasions throughout 2017 and 2018 to perform the moshpit-ready hit.

In August 2017, the two artists created two historic moments on the same day as they shut things down at Reading Festival on a Sunday afternoon, before heading to the O2 Arena in the evening to make a surprise appearance at Boy Better Know’s all-day festival.

Almost a year later at 2018 Wireless Festival, the two delivered another moment for the history books when Drake popped up towards the end of Giggs’ set and even performed a handful of his own hits such as “Nice For What” and “God’s Plan”.

While footage of Drake and Giggs’ surprise performances capture crowds going into a frenzy, the two created a number of “you just had to be there” moments in the UK following the release of “KMT”.

Around the same time as his 2018 Wireless performance, Drake also took some time out to drop some fresh material for us in the form of a Behind Barz freestyle with Link Up TV. Taking on a production courtesy of Richie Beats, the freestyle saw the 6 God use the opportunity to pay homage to the UK drill scene by getting busy on the eerie beat with some straight-talking lyrics.

Although the freestyle was met with mixed reviews, it was a pretty big statement for the world’s biggest artist to shine a light on the UK drill scene – a genre which was, and still is, heavily stigmatised.

Since his Behind Bars, Drake has shown love to UK drill on multiple occasions; most notably on his Headie One collab “Only You Freestyle”, his solo single “War” and when he was caught getting hyped at Loski’s London show back in 2019.

Drake Turning The O2 Into The O3

“Turn the O2 into the O3” Drake raps on his 2018 single “God’s Plan” and in 2019, he done just that as he literally turned London’s O2 Arena into the O3 for seven nights during the UK leg of his ASSASSINATION VACATION TOUR.

The scenes at the O3 were iconic as Drake, alongside DJ Tiffany Calver, brought out a whole heap of UK artists including J Hus – who went from being released from prison to surprising fans at the O2 in just a matter of hours.

Drake’s love for UK culture also extends to British television, particularly the crime drama series Top Boy which was originally cancelled after its second season in 2013. However, as an avid fan of the show, Drake used his power and resources to revive Top Boy for its third season in 2019, even serving as an exec producer of the show.

Speaking about its revival in an interview at the premiere for the third season, Drake said: “At first it was kind of, just for me, I was like – I need this back. But then I realised how much it meant to so many people.”

It definitely meant a lot to most of the UK, with many fans now awaiting the release of season 4, which began production towards the end of last year!