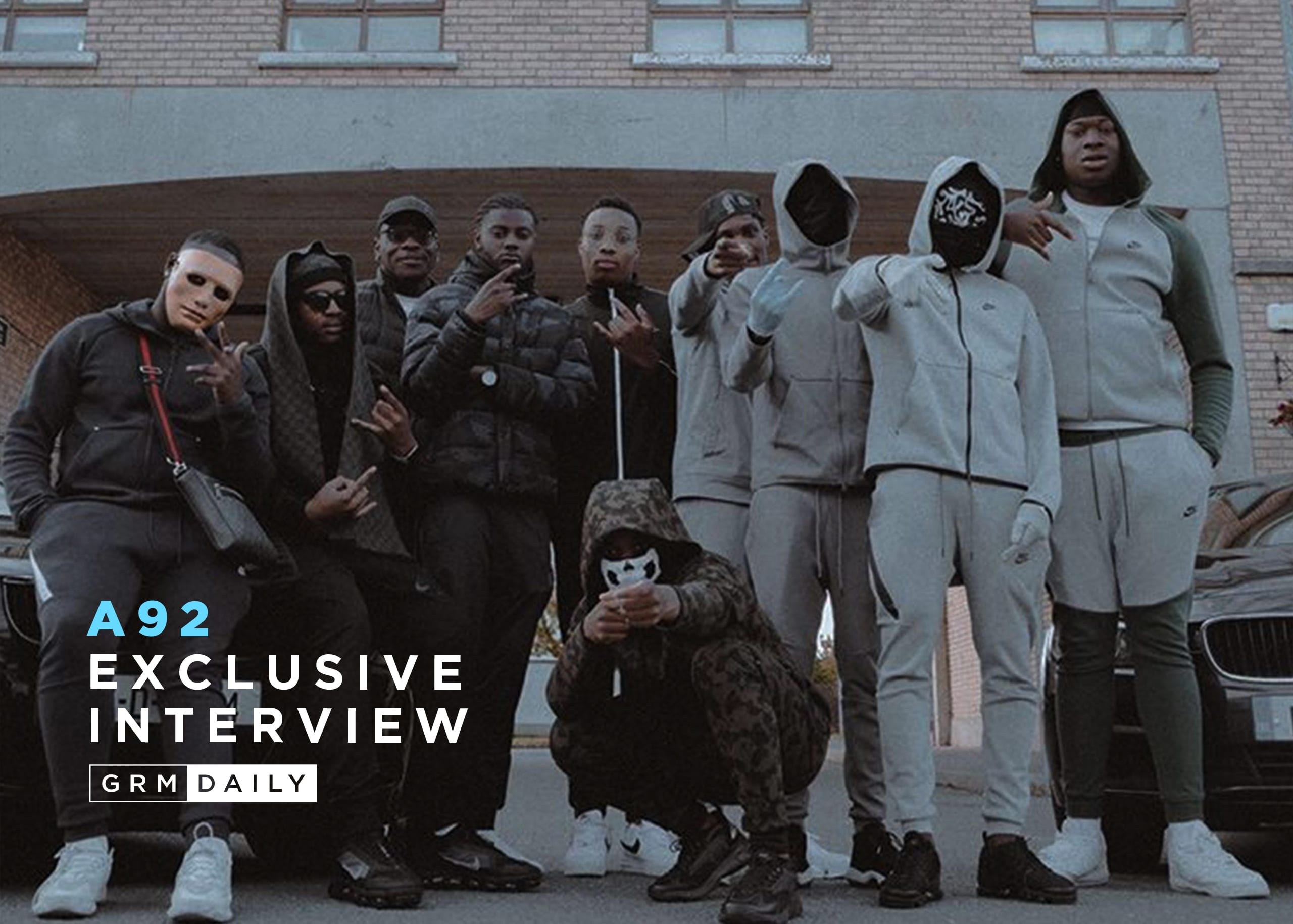 Andre Fazaz, BT, DBO, KEBZ, K-SAV, Nikz, and Offica are the names of the talented individuals that make up the drill collective A92. The talented group are here to shake up the drill scene, to be diverse, to put their hometown Drogheda on the map, and most of all to promote Ireland’s drill scene. It was practically impossible for A92 to not succeed after having already been successful solo artists before coming together as a collective.

After becoming the first drill act to enter both the UK and Irish Official Top 40 singles charts with a freestyle, it’s clear that A92 are a force to be reckoned with. The group released their highly-anticipated mixtape titled 92 Degrees at the tail end of 2020, and A92 are on the right path to becoming not only Ireland’s biggest drill stars, but the UK’s too.

GRM Daily sat down (virtually) with A92 members KEBZ, Nikz, K-SAV, and DBO for an exclusive interview to discuss their careers so far.

A92 grew up in the same hometown, allowing them to be able to relate to each other which ultimately explains why their chemistry is so strong throughout their tracks.

DBO: “We all knew each other from young, we’re all from a town in Ireland called Drogheda, it’s not too far from the capital. We all grew up there, raised from young.”

Nikz: “I wouldn’t say we were the closest when we were younger, but we all knew of each other. Obviously, we got closer when the music started to creep in.”

A92 are not here to mimic the UK drill scene. The boys pride themselves on being original and incomparable. With a unique combination of Yoruba, Irish and UK slang used within their music, the collective have worked hard to be taken seriously as musicians.

Kebz: “People really doubted us, people thought we were just trying to copy the UK and it would never blow, that’s what people thought about Irish drill at the start.”

DBO: “At the time, drill was still very fresh to everyone in Ireland, it was like a new genre. Nobody really had the ears for it. It was a bit hard starting off, but we have had support from a lot of people now.”

NIKS: “Obviously the majority of people just thought we were taking the piss. But there were people that actually believed us, who actually thought that we could make something out of it.”

West London-based Fumez The Engineer is one of the UK’s leading engineers, and his Plugged In sessions have gained a lot of well-deserved online publicity. Fumez invites rappers into his studio, supplies them with a wavy instrumental, and then lets them loose, resulting in some of the fieriest freestyles to date. Back in October, it was A92 members Offica, K-SAV, DBO, and BT’s turn to hop in the studio with Fumez, and the freestyle blew up online.

DBO: “We didn’t know it was going to blow! I knew it was a really good and solid song, but I didn’t expect it to actually take off the way it did.”

It’s hard to find any faults when each member absolutely murdered their verse. You’ll be screwing your face up as soon as you hear the sinister drill beat that Fumez provides the collective with. It’s hard to ignore the depth of DBO’s vocals too, and comments such as “DBO’s the type of guy to give a detention to his teachers” and “When did Thanos do drill?” have taken over the comments section. Delivering some clever lyricism, each member showcases what makes them diverse throughout the session, bringing their own unique flows to the forefront.

DBO: “Everybody actually said that there’s a chemistry and we work so well together. I think it’s because we’re so used to rapping with each other and showing each other our lyrics, we kind of just were able to bounce off each other without knowing.”

In the Irish charts, A92’s “Plugged In Freestyle” hit number five, it also entered the UK Top 40 and the YouTube video currently has over eight million views, making it one of the highest viewed Plugged In Freestyles to date, so you’ll be shocked to know how little time it took the boys to prepare.

K-SAV: “Sometimes we have time to prepare in advance and sometimes we’re literally called to go to the studio straight away. I feel like whatever way we do it, it still comes out good. For example, we have cold tracks that we have prepared in advance, and “Plugged In” was obviously on the spot and it was still cold so we just adapt!”

DBO: “We actually all wrote our lyrics to the “Plugged In Freestyle” on the way to Fumez’s studio. Spitting in the mic was the first time we were hearing everybody’s verses.”

The 11th of December will be a memorable date for the Irish drill scene as A92 dropped their brand-new mixtape titled 92 Degrees, a project that mixes Hip-Hop and drill throughout 15 fierce tracks.

DBO: “On this mixtape, you’re going to see everybody’s different styles. I don’t think there’s nobody in the A92 that has a particular or similar style, I think everybody’s very diverse, so we are bringing the different types to the mixtape. People can expect stompy flows to devilish flows, to jumpy beats to slow beats, a lot of different things.”

Although they’re proud of every track on 92 Degrees, DBO and K-SAV have their favourites.

K-SAV: “My personal favourite would probably be “Out Of Line” from Nikz and I, or “Foul Play” because they are f******amazing. Those are good songs.”

DBO: “Probably “Foul Play” because me and Kebz bounced off each other very well.”

When looking at the album art for “92 Degrees” it’s clear that A92 has taken inspiration from the American Hip-Hop group N.W.A’s iconic Straight Outta Compton album cover. Straight Outta Compton has had an immense influence on West Coast Hip-Hop, and A92 appears to be well on their way to doing something similar but for drill.

DBO: “We took inspiration from the N.W.A album cover and turned it into something fresh, something new!”

N.W.A may have been an influence for the mixtape cover art, but it was the music his father listened to while he was growing up that had an impact on A92 member DBO, along with some recognisable drill artists.

“I haven’t been listening to Drill for too long, I actually used to listen to a lot of 90’s rap because that’s what I grew up with in my house, my dad listened to it. Over here, there’s AM, Skengdo, Loski, them type of people. Those are artists that made me start to listen to drill so they’ve kind of influenced me.”

The UK government has blamed drill music for the increase in knife crimes within London, and this was widely covered in the media last year. In 2019, over one hundred drill videos were removed from YouTube due to government fears that these songs normalise gang violence amongst the youth. As a drill collective, A92 is trying to put those fears to rest.

Nikz and Kebz: “We don’t support that!”

DBO: “I feel if you were to ban drill, then there should be a ban on violent movies or violent TV shows. At the end of the day, it’s all entertainment. I was watching a Loski interview with Zeze Mills, and they talked about how drill music is basically entertainment, how it’s almost like acting. I can fully agree with that statement. DBO is a character at the end of the day, I have my own life that I live so this is always entertainment. People enjoy the music.”

NIKZ: “What I think is that there are different factors in real life that actually play a role in encouraging violence. For example, they’re talking about drill music but look at drugs, you get me? That’s what’s happening in real life. I don’t think it’s music that is promoting violence.”

DBO: “At the end of the day there was violence before there was the music, and violence is always going to happen no matter if there is drill music or not. I feel like they are trying to make drill music the scapegoat and make out that it promotes violence when it really doesn’t. Everybody watches violent movies, and at the end of the day, you’re not going to watch a violent movie and afterwards decide ‘Yeah that’s what I’m going to do’.”

While wearing a mask inspired by Naruto to hide his identity, A92 member Offica rose to fame with tracks such as “Naruto Drillings” featuring KSI and “Skiddibop.” Offica dropped the visuals for his track “Face Reveal” back in May, and as the title implies, he revealed his identity to the world. Fellow member K-SAV is known for his signature golden mask, but the rapper has admitted that his identity will not be revealed anytime soon.

COVID-19 and the pandemic have had a major impact on the music industry. Countless music events have been cancelled or postponed, but A92 remains hopeful that they will be able to put on events in 2021.

DBO: “It’s been harder obviously because you can’t just go to the studio whenever you want just because of the way the pandemic is. It’s about being able to adapt to the circumstances and we’re going to continue with the way that we’re going.”

Each member of the A92 started off as rising solo stars, and having them come together as a collective is something positive that has come out of 2020, and for 2021, the boys say:

“More music and more bangers init! Bigger and better things. If the pandemic allows it, we will definitely have shows for the fans. We want to show people that we can make all different types of music in different genres, that everybody can listen to us. We want to show how diverse we are. Next year you’re definitely going to see that on the upcoming songs.” 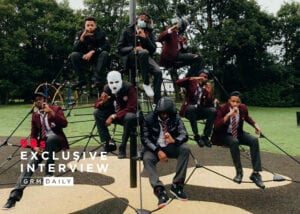