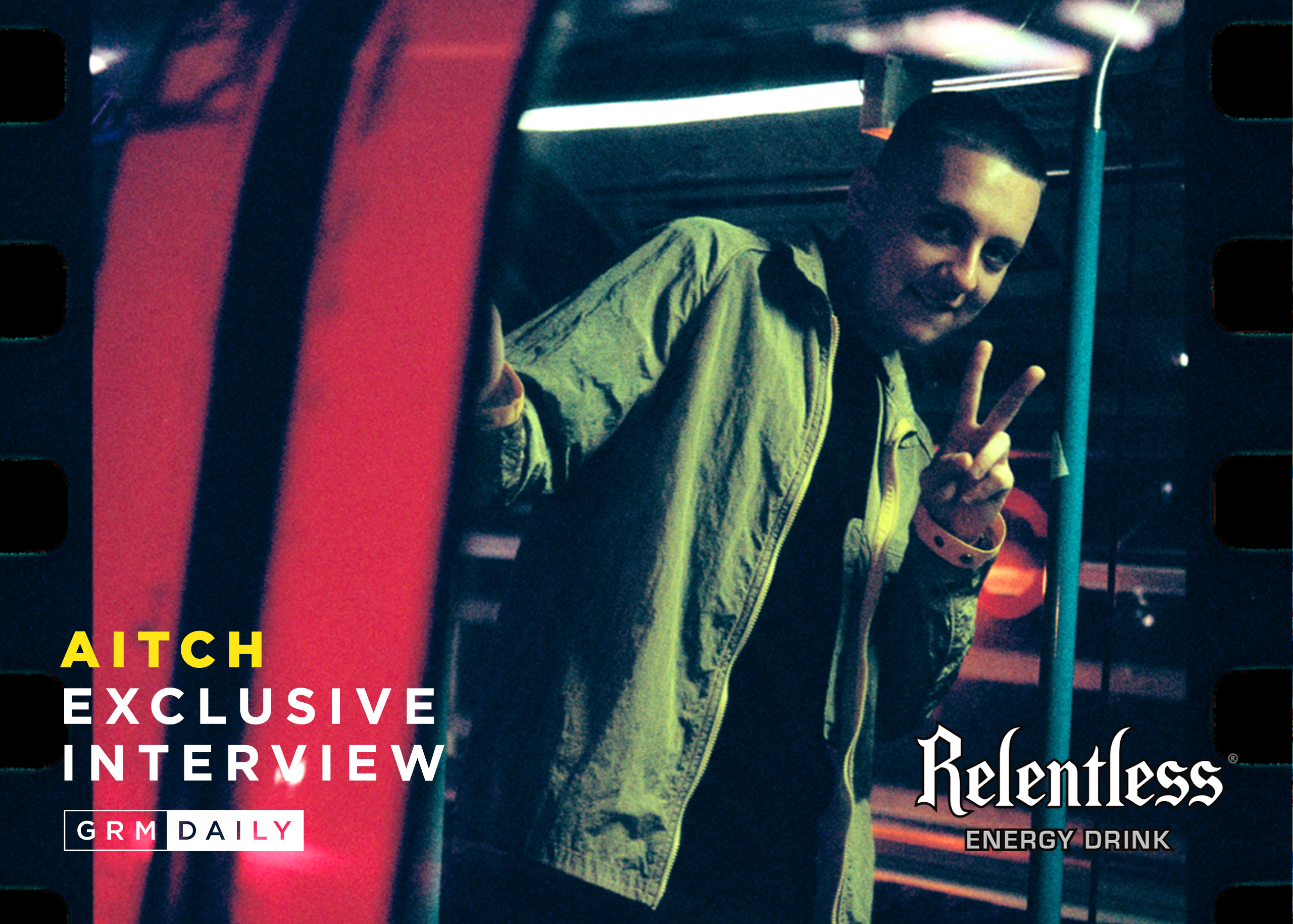 Aitch, one of the UK’s hottest rappers, known for his distinctive voice, cheeky personality, and hits like “Taste (Make It Shake)” and “Straight Rhymez”, has been making waves across the UK and US ever since he stepped foot on the scene. Being one of the UK’s hottest rappers, and a name even my grandparents know of, it’s clear the rapper has made an impact within the music scene. Despite winning a variety of awards and hitting Number one on the UK’s biggest chart show with his Ashanti collaboration on ‘Baby’, the rapper remains humble, and it’s clear that fame hasn’t got to his head as the laid-back rapper sat down with GRM Daily to discuss his Aitch-S2 project with Relentless Energy.

With the scorching hot sun beating down on him in his back garden, the rapper discussed his new travel scheme to help young people attend festivals, gigs, and other live events this summer. Relentless Energy has been powering experiences in music for over a decade, and now Aitch has teamed up to create an alternative travel scheme, The Aitch-S2 project, that will offer train vouchers worth up to £100 to 18 to 25-year-olds for eight weeks across July and August.

Through his Aitch-S2 initiative, he hopes to remove some of the financial barriers that might prevent people from making the most of the first summer after restrictions were lifted. With a history of supporting emerging artists in the Manchester area, Aitch is clearly passionate about regional scenes, talents, and cultures and says he wants to help people ‘break out of their city limits’.

Even at the age of 22, Aitch already wants to give back to his fans, and it’s clear he is grateful for all of the support he has received over the years.

“It’s good to help out man, I feel like I always personally have my best times at festivals and shows, that’s my favourite thing to do. So, it’s a shame when people can’t go because I like to share that same experience, do you know what I’m saying? So yeah, man, it’s good to just give people the opportunity to go and to do certain things. It’s always good to give back.”

Among the many industries that were hit hard by the Covid-19 pandemic, the festival industry was one of the most affected. As organisers planned the spring and summer of 2020, the UK went into full lockdown and all events were cancelled. Across the West – home to many of the UK’s biggest festivals – organisers and promoters were crossing their fingers that things would return to normal this summer, and for the most part, they have. This year’s Glastonbury festival had the largest attendance of them all, and it is clear that music plays an important role in people’s lives, and it seems from an artist’s perspective that there’s been a huge difference in the vibe of the audience at festivals this year.

“I was in the studio making music not to help me through the pandemic, just because I wouldn’t have had anything else to do if it wasn’t! I think obviously, it affected everyone. At the same time, I also think it was a good little break for me personally. But, now everything’s kind of back to normal, and all of the festivals are going on now it just feels like everything is x10. From last time, the festivals, it all just feels better. It’s like a weight has been lifted off everyone’s shoulders. I have been to a couple of festivals this year, and the vibe has been so sick, it’s good.

“Glastonbury was sick, AJ Tracey brought me out at Glasto, shout out Aj, and yeah Radio One’s Big Weekend, Ashanti came out, that was crazy. The one place I want to headline has to be Parklife because it’s in my hometown, that’s why no one has seen me on the Parklife lineup yet because I’m not doing it unless I’m the top act! Also, Glastonbury for historical reasons, that’s on my bucket list.”

While the majority of the music industry is in London, Aitch managed to make his way out of Manchester and into the mainstream but made sure to never forget his roots along the way.

“I would say always be yourself. Don’t get caught up trying to be someone else because it will get to a point where you do feel comfortable enough to be yourself. As much as I’m giving advice now, I’d also say don’t take everyone’s advice. Don’t always take anything that I say either because I’m only one person. John, from down the road is only one person, you know, I mean, different things work for different people. I always use the example of like, you know, depending on who it is, I could find a rapper tomorrow. I’m thinking the best idea for him is to fill his neck with chains, and drive a Rolls Royce, and that’s the way it sometimes works, however, that definitely didn’t work for me. I still can’t afford a chain! So like different strokes for different folks.”

Aitch isn’t afraid to show his life on social media, regularly showcasing what he’s up to on his Instagram stories, either driving about with his mates, chilling with his dogs, or popping to his local supermarket, and fans will now have the chance to win a day with the rapper via a Relentless on-can promotion that will be running from August, and you could even have the chance to join him in the studio if you’re lucky.

“It depends, there’s not a definite thing yet but it could be anything! The fan could come to a music video or one of the shows, or we could even be doing nothing! It all depends, but yeah it’ll be good vibes man. This is what fans want, and it’s more than music, sometimes people want to feel like they’re actually with you and can get to know the real you. It’ll be good stuff.”

As part of the Aitch-S2 initiative, created in partnership with Relentless energy drink, hundreds of people will be able to experience a summer without limits – and ‘Live without limits’ is a quote we should all live by.

“Live Without Limits just means to just do what you want to do, do what you think is right. Kinda like f*** the rules kind of vibe. You know, I’m saying like, just go with it. I mean, there are no limits, and also, don’t get complacent. Don’t just get to a certain point and then feel that you’re done. Oh, there’s always room for improvement. There are no limits.”

The rapper recently teamed up with London-based singer/songwriter Bakar on his new single, “In Disguise”. Bakar’s captivating vocal performance, combined with Aitch’s fashionable hard-hitting, and clever wordplay creates the perfect blend between two big figures in the UK music scene, and fans will be expecting to hear the hit on his new tour.

The artist announced he will be touring in October 2022, visiting cities across the UK and Ireland. During his Close to Home tour, the rapper will kick off in Dublin on October 3rd and finish in Manchester on October 24th, with the rest of the tour continuing into early 2023. Clearly, Aitch has a big year ahead of him, and Aitch x Relentless is just the beginning.

“Expect more visuals! I’ve also got some more singles coming soon, as well as the video for “In Disguise”. I’ve got loads of stuff, obviously, we’re doing the whole Relentless collaboration, I’ve got my Australia, UK, and Europe tour. A Pool Party in Ibiza, all that stuff. But yeah, my album Close To Home is coming soon too. It’s all about me. It’s all about what I’ve been through the past couple of years. Every single song is a certain story. There’s 100% a story behind every single song and it’s fun at the same time, it’s not boring. Fans will see a different side of me, I feel like this is needed now, I feel like it’s about time.”