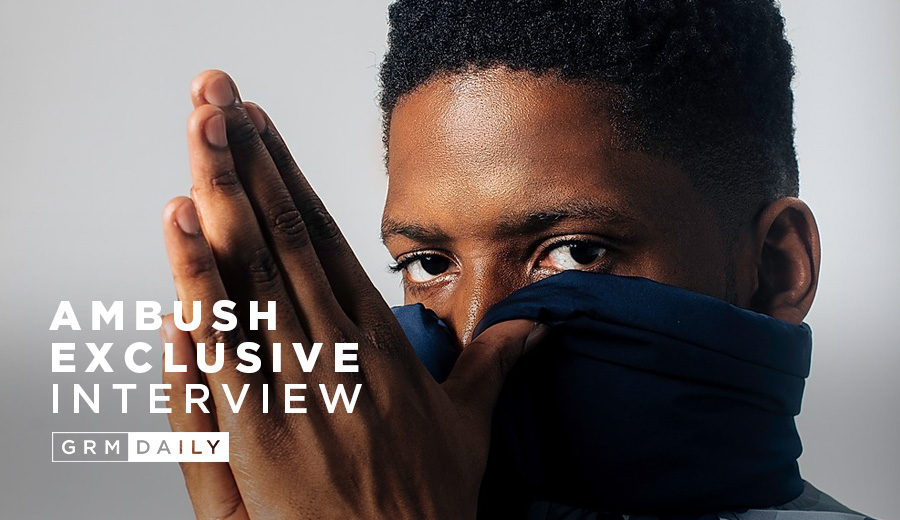 Last week, Camden rapper Ambush dropped his long-awaited mixtape Ask My Brother. Ask My Brother is a cohesive and cinematic tape: there are flashes of fury, solid storytelling, and moments of both candidness and bravado. There is an underlying theme of hunger as Ambush continues to climb his way to the top of the UK rap scene. We caught up with the rapper to talk about his journey so far: one that has been marked by loss, set-backs and success- all underpinned by a burning desire to build an empire.

Ambush first got into music after his older brother would host grime sets in his family home after building a makeshift studio in his bedroom. Aged 10 he would watch local MCs write bars in his living room so it wasn’t long before he picked up the pen himself. “Everyone from the ends would come to my yard and record and these man were the hardest.” Get Rich and Die Tryin’ was an integral album that was the soundtrack to Ambush’s childhood: “50 Cent was a rapper that made songs, so that’s where I got that side of things from.”. He references the New York rapper a couple of times in his new tape, but 50’s influence on Ambush, although nuanced, seemingly transcends rap. For example, in the “A.M.B (InTrill)” music video Ambush dons an oversized, pink bandana-print hoodie which is certainly reminiscent of early 2000s US street style.

Although you may associate Camden with its buzzing nightlife, culture and colour, the borough is an exemplar of the stark inequalities in inner-city London. “C- Town boys, but you never see us in the stables,” Ambush spits on 2018 track “Same Grind”, referencing the North London borough where he grew up. As the area continues to undergo creeping gentrification, the red-brick estates of areas such as Queen’s Crescent defiantly contrast the vibrancy of Camden Locke. “It’s mad fam, just google it,” he smirks, “It’s notorious, I don’t think I need to say much about that, but yeah, I was in the middle of all of it growing up.”

Since 2017, Ambush’s releases have been sporadic but impactful. His fresh-home track “Sauce” was a confident display of his effortless flow and carefully-crafted bars, whilst its follow up “Blood” was an intense and searing song packaged for the streets. And in a UK scene saturated with so many artists, Ambush ruthlessly carved out his own style. His cadence, inflections, unique selection of ad-libs, and tendency to emphasise and repeat select bars, helped him engineer his distinguishable sound. “The thing growing up was having your own ting- I come from that era. I’m slap bang in the middle of the OG’s and the young G’s so I guess I can take from both sides of them and create my own flavour and sound.”

It was in 2018 however when Ambush dropped his defining track “Jumpy”- a high-spirited hit that became the soundtrack to that summer- when things really took off. UK legends Skepta and Chip featured on the remix which propelled the song to stratospheric success.

Concerns that Ambush may soon fade from the spotlight were quickly thwarted when he released “Man Can’t”. Produced by Mubz Got Beatz, the elastic bass on the instrumental paired with Ambush’s caustic delivery made it an instant hit, and was a clear message that his ascendancy in the UK rap scene showed no signs of slowing down.

However, Ambush’s come-up was not solely marked by high spirits and success, as in 2017 he lost his cousin, Nuno Cardoso, who died in police custody. A year later Ambush released the melodic eulogy “Day Ones” alongside Presi Pros.

Following the murder of George Floyd by Minneapolis police which triggered the largest civil rights movement in history, Nuno’s death has been revisited as a case study of police brutality in the UK. Ambush has been very vocal about the incident. He attended the Black Lives Matter peaceful protest last week and recently drove around his local area giving out ‘Justice for Nuno’ sweatshirts and signing CDs for his fans.

“I don’t think there’s gonna be any immediate change. These things they happen, there’s a lot of hype about it, then everyone forgets. My cousin died three years ago. I was marching in the streets them times. No one was listening to me then or asking me interview questions then,” Ambush reflects, “The whole infrastructure has to change. Every case has to be revisited if you’re serious about reform… It’s about everyone learning the truth and unlearning the false information they’ve been taught.”

As he entered 2019, Ambush was gearing up for the biggest year of his musical career. He was due to perform at festivals including Wireless and MerkyFest, but an untimely arrest meant that he spent the first six months of the year in prison. “I was pissed off fam! What do you think?’ he exclaims. “I was kinda optimistic at first because I thought I’m doing all this; I’m booked for Wireless… no way are they gonna take me to jail for some dumb shit. It was a test but I got through it.”

Upon his release, Ambush dropped “Only Right” – a festive, flute-assisted tune that signalled his comeback. This was followed by a couple of features: a solid verse on Poundz’s “Opp Thot” remix and an appearance on Backroad Gee’s breakthrough hit “Party Popper”. After much anticipation, it was not long until Ambush announced his mixtape Ask My Brother and it was certainly worth the wait.

The tape is a well-rounded and ambitious body of work that documents the rapper’s life so far across 15 tracks. “My fans have been dying for a body of work for a while. Also, a lot of people know me from “Jumpy” so don’t know my story, so it was important for me to be as honest as possible about my life on my tape,” says Ambush.

The features on the project (Giggs, D Double E, RA, C BIZ, H Moneda and Presi Pros) all compliment Ambush’s style and are a strong selection from the UK’s finest in grime and road rap. “I was on tour with Gigg’s- that’s the big homie. We would go studio and smash out tunes and he told me I could put both of them on the tape,” he announces proudly. “D Double and RA were my favourite grime MCs growing up so I made the tune [“Started”] and shouted them to be on it. H and Biz are proper guys I know and they’re real life winners so it was only right I put them on that track.”

“This tape is about my life and my environment,” Ambush raps on the mixtape’s opening track. And it’s true. Ask My Brother is a story of hunger and struggle as Ambush adjusts from his life on the roads to a career in music. The lead single “Eastenders”, is a masterclass in storytelling as Ambush narrates three different tales that each resulted in the death of young man following feuds that stemmed from a deadly mix of jealousy, pride and love.

There are also moments of braggadocio and triumph as expressed on tracks such as “Casino” and “Bit More”. The song “Side Bitch” is a more mellow offering where Ambush questions the loyalty of a potential partner, whilst “It’s Me” takes a more comical approach to the traditional love song, with the track opening with a voice note from an irate love interest. The standout track for me is the mixtape’s outro “Tommy Shelby (OutDrill)” in which the rapper reflects on how his life decisions and experiences have shaped him into who he is today: a man with judgement and hunger similar to that of the notorious leader of the Peaky Blinders.

Ask My Brother is a comprehensive tape that is a timestamp of Ambush’s life so far. As he continues to build his Buzzworl brand, he makes it clear that he wants to forge his own legacy. “I built it from the ground up just believing in myself and my people and just want people to be inspired by that.”

Be sure to support and steam the mixtape below!