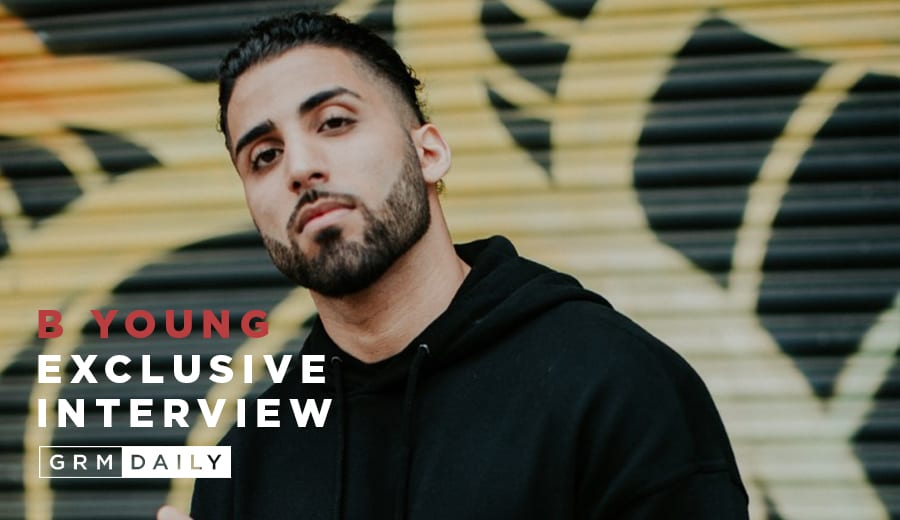 We all know the hit single “Jumanji”, which dropped back in 2017. To date it has racked up a whopping 52 million views, but we know little about the talented artist behind the track, B Young.

GRM caught up with Hackney’s 25-year-old rapper and singer who blew up from his addictive tracks like “Catch Me Outside,” “Been Wavey” and “079ME.” So far, B Young has managed to lay low in his music career, but in an exclusive interview, he reveals all about his upbringing, what got him into music, and gives us all the inside information about his brand new single titled “Last Night” featuring Tion Wayne.

What was your upbringing like, and what got you into music?

Have your family always been supportive of your music career?

“Yeah, they have been! You know a lot of parents kind of push you away saying music’s not going to work, but my family have never been those kind of people, they were like ‘if you enjoy it, do what you want to do.’ They are very supportive, one hundred percent. Music isn’t all I’ve been doing though, for example, I used to work in a gym, so music was always just a side thing that I did, and when it started going off I focused more on it.”

So is that what you would be doing if you weren’t a musician, working in a gym?

“I actually don’t know! Maybe, my brother and I used to own a gym together, that was about four years ago so god knows what would’ve gone on right now if I wasn’t doing music!”

Who are some of your musical influences?

“When I was younger I used to listen to everything but it obviously stemmed from grime. So Kano was one of the main ones, a bit of dancehall, but I used to listen to everything! At school, we used to bang out a lot of Vybz Kartel I can’t lie! Collie Buddz is another one, and I’ve got a feature with him so that’s a mad one. Even people like Drake, Trey Songz, Chris Brown, literally every style you can think of.

When I was younger I tried to almost make sounds similar to other artists, but as you grow older you kind of develop your own sound and you start to understand who you are. You kind of put yourself into the music. I would say it started from trying to almost copy, that was when I was really, really young about thirteen or fourteen. As you get older you have your own personality and that comes across in the music.”

If you could drop a text to a huge artist right now asking for a collab, who would it be?

“He’s gone now but XXXTENTACION, I f*** with triple X, that would’ve been a good one I can’t lie, I could’ve done that.”

Taking it back to 2017, did you know that “Jumanji” was going to blow up and what was the thought process behind that?

“I didn’t know what “Jumanji” was going to do! Have you heard of “Been Wavey”? That year, I was releasing bits here and there, and I had them recorded for time, so I had a plan to release a song every like two months lets say, “Been Wavey” picked up and Wizkid shouted it out.

The next song was “Jumanji” and to be honest, I’ve got a soft spot for “Been Wavey”. I’m not going to lie, I think it’s a banger, and I thought “Been Wavey” was going to do what “Jumanji” did and be the one track that makes me blow.

With “Jumanji”, we finished filming and editing and it was looking hard, and to the extent that it grew I did not expect that! It’s got like 52 million views on the video and it’s gone platinum or something silly like that! I had a feeling that “Jumanji” was going to do well, especially off the back-of “Been Wavey”. I had a little bit of a buzz but I didn’t expect it to go that big!”

One of your most recent singles is “WINE”, what was the thought process behind that one?

“Do you know what it is? As I make more music I feel like I’ve changed as a person, you do naturally as you grow, and I’ve got older. With “Wine” it’s like, in my head, I see it as a bit more of a mature track. I didn’t really have a thought process behind it, I just sat down in the studio and I had a producer abroad sending me bare stuff. He sent me a beat and I was like ah this beat is hard and I jumped on it and everything was just flowing, I can’t even describe how that one came about!

I like making different things, but that doesn’t mean I’m going to be making some next, new genre, I mean you never know! I feel like I have grown to an extent, and I feel like “Wine” is something that reflects that.”

What is a day in the studio like with B Young and are you a bit of a perfectionist when it comes to music?

“It’s mad because it’s not just me, it’s also my brother who’s my manager and we are both perfectionists, so you got two perfectionists together. We can’t both have an opinion that’s not the same, we have to both be happy, so it’s a hard one.

Majority of the time I’m on my own in the studio, I have my own studio in my house, so when I’m actually recording I like to be on my own, because I can experiment and I can try my own style. I find it easier if it’s just me in my zone, but that’s not to say that in the studio I won’t have a producer.”

You have a new track with Tion Wayne coming out Thursday called “Last Night” how did that collaboration come about and can you tell me a bit more about that single?

“So that song is hot and new but I wrote that a year ago, and it’s just been sat there and I was like this is a banger but we always felt like it was missing something. I know Tion, we’ve met a few times and I feel like because of the person he is and the kind of track “Last Night” is as it’s a girls track, it only made sense to get Tion on it and he went in.

He sent over his verse, we weren’t even in the studio together for that one. He did his own thing where he was because it was during all of this Coronavirus stuff. He just did his thing, sent it over, and it’s a banger. It’s annoying because I wanted to drop things a lot sooner but it’s not too late.”

You shared a sneak peek of the music video for “Last Night” on your Instagram, how did you come up with the concept for that video and do you like to have a lot of creative control when it comes to music videos?

“So with that one, my brother helped direct it. In terms of the creative side of things, it’s mainly me and my brother coming up with it. It’s easy because you can just be straight up, but with a stranger, you have to be careful what you say. With my brother I can just say ‘that’s s*** if I don’t like it!

We came up with that video together to an extent. With music videos, I feel like as much as I plan it I can’t imagine it until I see it, and with “Last Night” everything just came together exactly how we imagined it. It was was a sick video shoot, it’s got a little storyline to it!”

Have you been able to keep creative during the past few months with everything that’s been going on?

“I’ve been making bits here and there. What’s annoying is I like doing shows, and last year I was a bit stressed because we were doing too many. I was doing like three to four club shows a week, months on end, but now I’m getting withdrawals because I want to do shows.

Do you know what’s a mad one? It’s like if you don’t do shows, you almost forget that you’re actually an artist. Being in the studio making music is like what I did back in the day, but now I’m not out doing shows it feels like I’m not an artist and I almost forget what it’s like.”

“There’s a few, the first one I did was in Leicester, that was mad because that was my first proper bigger show. The first show I ever did was in front of like fifteen people, and then the next show I did it was packed out and I didn’t have any security or nothing.

I didn’t know how that was going to pan out, I went into the venue and I was getting dashed about, girls were trying to jump on me! The most memorable was KISS though, it was in front of like 12,000 people!”

“Bro, one hundred percent! The nerves never go for me, I’m quite a nervous person as it is. I’ve always been a bit low-key, even before music I was never active on social media like that, I keep myself to myself. You know what I don’t like, too much noise for no reason, I’m not searching for clout. I feel like a lot of people besides their music are doing a lot for clout, but I just feel like at this point in my life I want to be known for my music, that’s about it.”

What can we expect to see from you next?

“You never know I might dip into grime again! I’m excited, I’ve got some different things to drop that I think nobody would expect from B Young.

So this year I’ve got singles ready and I know everyone wants a tape from me. I can’t lie, I could release one now but you know me being a perfectionist, but it is more or less ready.

I don’t know if I’ll drop this year or the start of next year, but that’s definitely something that I’m properly excited about because I’m dropping singles as it is, so a tape is probably coming! I know nothing about shows right now but hopefully next year!”

Keep it locked on GRM Daily for the new B Young single with Tion Wayne, and all the latest developments!