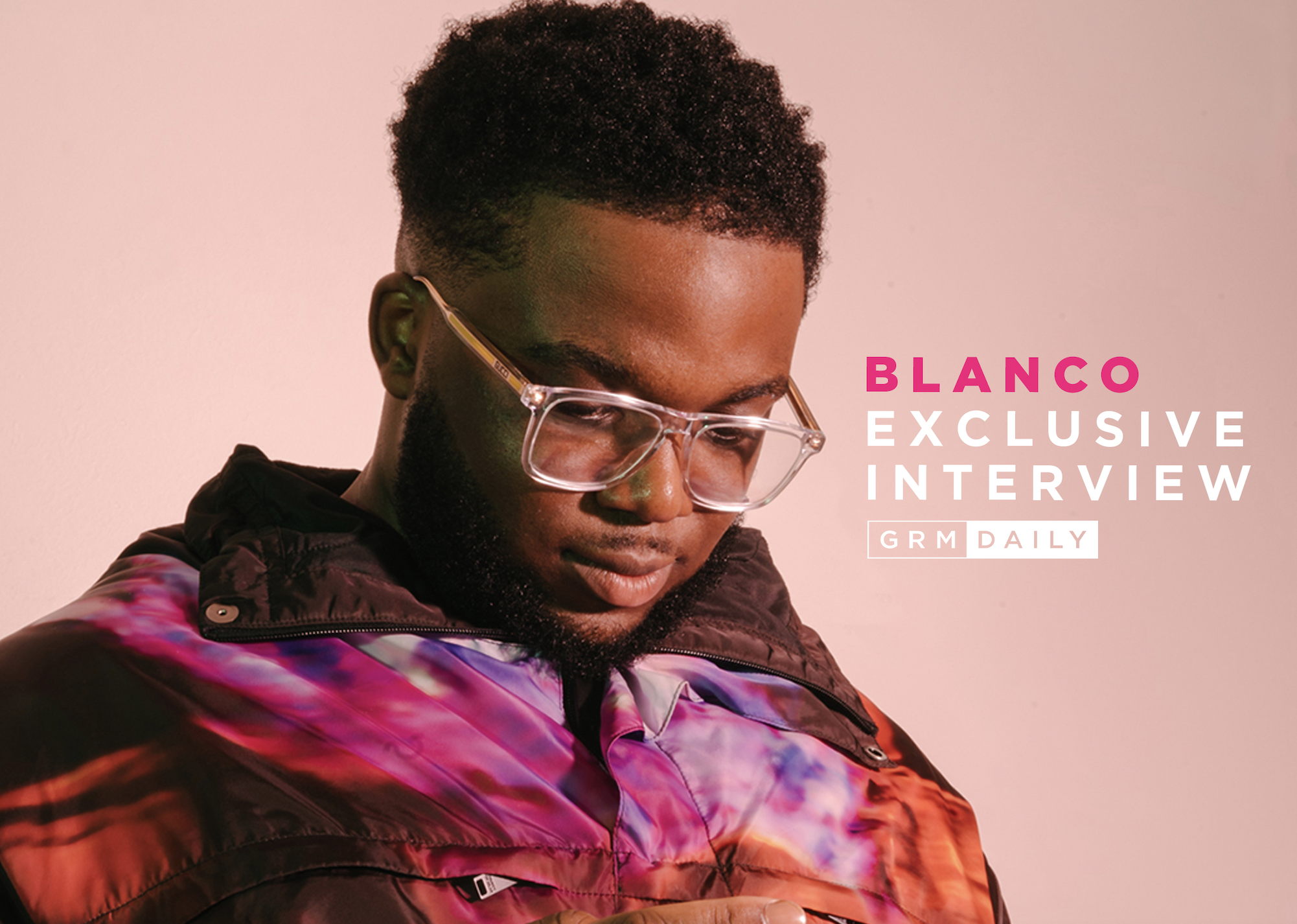 Starting off as a well-known member of one of the biggest drill groups in the UK to now becoming one of the most distinctively unique yet underrated UK artists, Blanco is pushing the boundary for a new type of sound in UK rap.

Blanco first became known as a member of UK drill group Harlem Spartans. He released a solo track called “Jason Bourne” in late 2016 which garnered attention on YouTube because of his authentic approach on the track.

Together with other notable members including Loski, MizOrMac and the late Bis, they released multiple songs in 2017 which went viral such as “Kennington Where It Started”, “No Hook” and “Call Me A Spartan”. I asked Blanco how it all started for him and his music career.

Ahead of the release of his debut mixtape City of God, I was able to sit down with Blanco to get some insight into how he approaches music.

What got you into music and what made you take it seriously?

“I always loved music, like literally I always had music on my phone. What got me into it was that there was a youth studio, a community centre. Bis was already there, a couple other people were just rapping. I just thought I love music so much I could probably do this. One day people told me I should write to this beat, next week I went there with my bars, everyone was like ‘you’re hard still’. That’s all I needed.“

From his early days, Blanco was known for his distinct voice, wordplay and use of references in his lyrics. On the song “Kent Nizzy”, for example, he raps: “Bring your Strizzy’s, Joker’s here and it’s Arkham City / Nine tails Chakra with me, sand Shinobi men Gaara’s with me.” The first line is an obvious reference to Joker and the city of Arkham from Batman and the following line is a reference to Naruto; with the Nine Tails, Chakra, Shinobi and Gaara all hailing from the popular anime.

Blanco and the rest of the Harlem Spartans continued to grow and solidified themselves in what became known as the ‘golden era’ of drill music.

How does it feel being part of the reason drill is so popular today?

“To be honest I don’t really consider myself a drill artist, it sounds cool but it’s not really my thing anymore.”

“Is there any of the newer artists that have caught your attention?

“Headie One, Central Cee – he’s doing his own thing.”

Blanco’s career came to a halt in February 2017 when he and fellow Harlem Spartans member MizOrMac were pulled over by police in the back of a taxi. The pair were searched and found to be in possession of a loaded gun and a samurai sword. The pair were arrested and later sentenced, Blanco receiving 3 and a half years and MizOrMac receiving 6 years in prison.

Blanco returned to music however, releasing his single “Return of Bourne” in late 2018 which saw him return to drill, dropping his signature flows and delivery on a gritty, hard-hitting beat. In 2019 he released another drill track in the form of “21st Century Spartans” alongside Bis and MizOrMac which was recorded before his arrest.

After this, Blanco began to distance himself from his drill origins, releasing the Dr Valdes-produced “Ringtone” – a softer, bubblier track that still managed to incorporate Blanco’s unique style and tone.

How was it for you coming back to music after being away for a little bit?

“It felt weird, I was writing in jail but everything I wrote didn’t fit the current times, I didn’t write to any drill beats so coming back and doing “Return of Bourne” felt strange.”

Your sound is now a mixture of a lot of different genres. How would you describe the music you’re making?

“It’s just more me. I feel like it’s truer to myself, especially the Brazilian beats. I like it so much.”

Would you say you enjoy this style more than drill?

“Yeah, I don’t think anyone enjoys drill. Every drill artist does not wanna do drill.”

Like other Harlem Spartans member Loski, Blanco has continued along this path releasing more lighter sounding tracks such as “Pull Up”, “Salomon Rondon” and “I Don’t Mind” alongside Bis – all bangers by the way. Blanco’s clear tone, intricate wordplay and punchlines were still prominent in these newer tracks with bars such as “spend like Iraqi, my dog and I’m shaggy” and “Blue hair yellow one, Sweden, Come creepin’ on the hunt, Ethan” – pure heat.

Other than his wordplay and elite lyricism which has now become a staple of his songs, Blanco’s other strengths lie in his flows and delivery. His voice while casual is clear in tone which allows him to ride beats almost effortlessly, similarly to Headie One. His flows are hard-hitting which allows him to body both bubbly trap-style beats as well as more aggressive drill beats. This can be seen on his verse on the drill track “No Hook” and the lighter “I Don’t Mind” where on both tracks, he uses a double rhyme scheme which enables him to ride each beat expertly well. His use of punchlines, often being about anime help his bars resonate more with listeners no matter what type of beat he’s on.

You’ve become renowned for your wordplay and lyricism; would you say it’s something that comes naturally to you?

“Yeah, it comes naturally. You have to be in the moment. You just get better and better as you go along.”

You also reference a lot of anime and comic books in your music. How do you find incorporating them into your bars?

“I don’t really think Im putting them together you know. I’m not really searching for it; it’s coming to me. I watch a lot of it so whatever comes to my head I just say it, so it just kinda comes to me.”

On the same topic, what are some of your favourite animes and comic books?

“Attack on Titan, Death Note – there’s bare! Demon Slayer, Hunter X Hunter is up there, Full Metal Alchemist. Dragon Ball Z is definitely up there. There’s more, this is just off the top of my head.”

In 2019 we were finally gifted a project from Blanco in the form of his “English Dubbed” EP – another reference to anime. In this EP we witnessed songs like “Pull Up” and “Slumz”, again showcasing Blanco’s slick bars and smooth cadence.

How would you say you’ve evolved your sound since English Dubbed in 2019?

“Before that was just a bit random, now I kinda know what I wanna do. Even with this tape I didn’t get everything I wanted to do so now from this point on I know what I wanna do. I feel like I’m ignoring all criticism – I don’t want to hear what anyone has to say. I just wanna do me like the way Kanye West does it.”

With drill and afro-swing being the two biggest genres in the UK over the last few years, Blanco is one of the few artists in the UK pushing for this newer type of UK sound that has some similarities to US trap with regards to the type of beats he uses. Blanco hasn’t forgotten his drill roots, however, appearing on “Handsome G” with Stay Flee Get Lizzy, RV and Youngs Teflon, as well as on Offica’s “Where’s the Motive” last year.

His latest releases over the last year were more along the lines of his EP, the songs “Shippuden”, “Memphis” and “Magneto” have started to gain Blanco much more mainstream attention and given us a taste of what his mixtape is going to be like.

In addition to his bars and mellow delivery, the way Blanco rides these softer instrumentals is a pleasure to hear as he gracefully transitions between different flows and rhyme schemes.

On the tape there are a few features. How did you go you go about deciding the right feature for the right track?

“Some of the songs I wrote as solo songs then I thought this would be better with someone on it.”

What’s next for you recently after the release of the new mixtape?

“After the tape, the plan is to drop an album. Kinda bring it to the next level. That’s my plan. Everything on the tape but just ten times better. I know how to do a tape now. Getting used to it was long but I feel like I understand it now. I can work on perfecting everything.”

What’s your favourite song on City Of God?

“Every time someone asks me it changes. Today I think it’s “TSG”, that’s probably my favourite one. I also like “Pain” though. If I didn’t do a video for “Magneto”, I’d probably say that one.

Overall, Blanco has already cemented himself as one of the UK’s most talented artists. Despite being around for nearly five years he is only starting to be noticed by more mainstream audiences recently.

His rise has been exciting to witness and as he expands his audience and showcases his talents artistically. City of God continues to show Blanco at his best; mastering his own sound and coming into his own.

Take it in below!