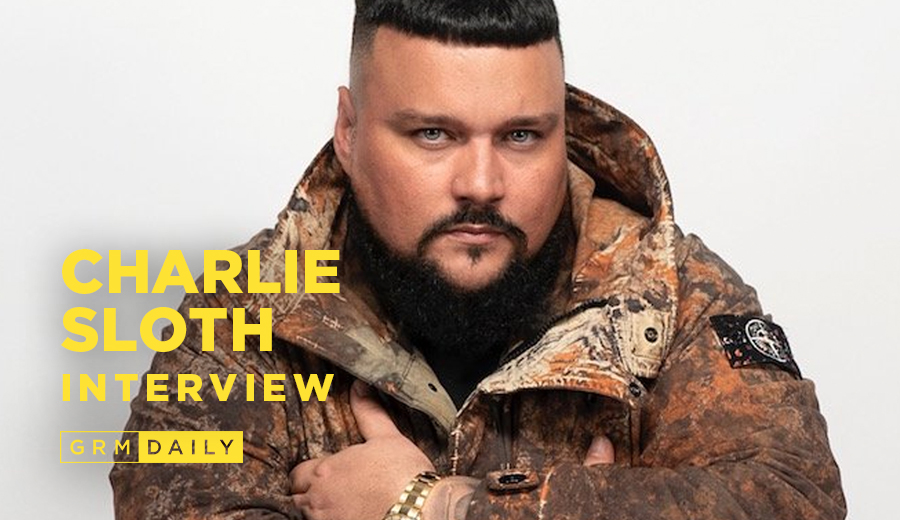 Charlie Sloth; The People’s Prince and the “best looking fat guy in the universe”, has had a colossal career so far. While being the host and the founder of the Champions League standard of rap freestyles in Fire In The Booth, the UK has followed Charlie on Radio 1Xtra and now on Apple Music’s Beats 1.

But while also dominating the UK music scene as a DJ, producer and spokesperson, we have also continued to see Charlie go on tour and release his own music, all in the same time of opening his very own nightclubs across the country.

In celebration of the huge move in which Charlie made from BBC Radio 1xtra over to Apple Music, the People’s Prince caught up with ourselves here at GRM to have a chat on his first twelve months at Beats 1, what is in store for the future of Fire In the Booth and much more.

“I always look forward to taking on new challenges”, when asked about his first experiences with Beats 1. “It’s been a whole new experience for me jumping into the streaming world and getting to grips with it. I’ve said it before, I think it is the future and I believe that music has now changed forever and Apple are at the forefront of that.

“To be able to be a part of such an exciting movement and an exciting company, it is just incredible. And this year since I’ve joined Apple has been a real eye-opener as to just how big the world of music is!

“Predominantly in my career I have just worked with UK music but with now working on Beats 1, I have gone from doing six shows a week to one show a week, so I’ve had much more time to travel and meet more people and network around the world with global artists and musicians. So this first year has been a rollercoaster ride, but it’s been incredible to be fair.”

One thing which has stood out for all consumers of the new Beats 1 show is the production. From the iconic and extremely distinctive voice of Charlie Sloth, to the classic “perfect” ad-libs following a wheel-up-worthy bar from your favourite MC, Charlie and Apple have upped the levels on this new show.

When I mentioned this to Charlie, he couldn’t help but be appreciative of the comment. “I appreciate you saying that, and the fact that you have noticed that means a lot, because we have spent a lot of time trying to capture that,” he said.

“Working with the biggest company in the world comes with huge expectations so we made sure that we levelled up to meet the standards of Apple and Beats 1, and I feel like we have done a good job of doing that. But it has got to the point now where Fire In The Booth has always been a statement, where we work as a platform for artists who really enjoy the art of rapping. And we have always had the biggest artists in the world come through but this year the floodgates have opened.

As the conversation continues to touch on the demanding standards which are expected by those completing their Fire In The Booth, Charlie kindly have GRM their very own exclusive on who to expect this month on the prestigious platform. “Alright, I’ll give you one! Young Dolph and Key Glock, which is a pretty mad one. That’s gonna be dropping this month and we haven’t announced that anywhere yet, so that’s a bit of an exclusive for GRM!

“The levels this year are absolutely insane! In terms of the calibre of artists, I just feel that this year is going to be a massive, massive year. I’m going to be travelling around the world, doing some exciting stuff with the biggest artists in each territory. But for me, everywhere I go, I leave a stamp of Britishness.

“People are interested in the music that I’m so passionate about and every time I touch base with the biggest artists in France, or Germany, or Australia, they always look back in to see what’s going on. So I feel that by myself going to those territories and giving those artists an opportunity on Fire In The Booth, it just creates a real international feel.”

But as the standards have taken a huge leap, Sloth doesn’t intend on stopping there. While continuing to break down his plans on how he intends to dominate 2020 he adds, “This year we have some huge, huge plans.

“I always set myself targets for each year to 18 months and my targets now are that I want to be a part of and help UK and British rap break through into the international market. I feel like the international market is ready for it, and I feel like I am now in an incredible position to be able to now showcase the incredible music we have over here.

“I have always travelled and done shows all over the world, but this year I have made it my main goal to be a part of the story and the narrative of the first British, international rap star. And I think we are very close, man.”

And as we continue to discuss all the different possibilities of who we believe could be the first artist to really make the breakthrough over the pond in the near future, Charlie without a doubt pin-points the talents of D Block Europe.

“For me, the first people whose sound I believe will resonate over there is D Block Europe. I feel that they have a sound that is very British but at the same time, it resonates on an international scale. And I feel their personality and their character also elevates everything they’re doing as well. So I feel that they’re going to have a really incredible 2020.

“Even the likes of Giggs – a real legend and pioneer over here – he’s got a real strong following Stateside and Australia and Africa, and I feel that he is on a tipping point as well of becoming an international rap star! I think he is one record away pretty much.”

Last summer saw GRM Daily and Charlie Sloth come together for a sick new project in the form of the Fire In The Park festival. With some of the biggest names coming from the UK gracing the stage, along with some friends from across the Atlantic coming through to shut down.

When commenting on the event, Charlie emphasised the importance of the UK hosting an event which showcases and celebrates British culture and the talent that the UK has to offer. “The only negative of the event what the rain. But since the day the first Fire In The Park finished, we’ve been working on the next one.

“Myself and GRM have been working to make the next one bigger, more exciting and more accessible. From the last one we learnt loads because we didn’t do it with a big promoter, it was literally just me and my team! When people want to do festivals of that size, they usually go and get a partner. But I am telling you now, Fire In The Park 2020 is going to be a movie.

“We’ve already boxed off 90 per cent of the line-up and we’re going to start talking about it in March, but the line-up this year, bro – it’s mind-blowing. But one of the main things about the festival is making sure that all of the main headline artists are UK artists. We will see some international artists on there, but they won’t overshadow the main headlining acts.

“It’s important to me that we have a UK festival that really celebrates UK culture. We have festivals that reflect it and pay a bit of homage to what is going on over here, but there is nothing that is directly UK and for me that is so important because the scene has never been so big, and so healthy, and so vibrant.

As the conversation with Charlie came to an end, it naturally took a turn back to his world-famous Fire In The Booth. While discussing our favourite performances, homages were paid to the likes of Ocean Wisdom, Kamakaze and much more. But when asking who his personal favourite is, Sloth commented, “It’s like asking me who my favourite child is!

“There’s like over 600 Fire In The Booth’s, I think theres even more than that now and I appreciate them all for different reasons. People are always like ‘ah Sloth you say everyone’s’ but honestly, I really mean that.

“There’s so many Fire In The Booth’s that are done, that never see the light of day. That happens a lot. There are maybe five or 10 a year that don’t come out because I don’t think they’re good enough! I’ll always keep it 100 and I’ll go back to the artist and I will tell them ‘that wasn’t strong enough’ or ‘you can come back another time when you feel like you’re ready’. Every Fire In The Booth that we have had, I’ve respected and admired for different reasons.

“So for me to pick one and only one of the many Fire In The Booth’s, it would be unfair. I mean, this first year since we’ve joined Apple, there’s been so many incredible moments! Northside Benji, he blew my mind! M Huncho! Digga D, that was another one for me. Loski, Megan the Stallion, there’s been so many mad ones this past year alone. So for me to pick just one from the last 10 years… It’s impossible.”

Listen to the Charlie Sloth Rap Show on Apple Music every Saturday at 8pm and on-demand via apple.co/Charlie

Taff Amore has come through with visuals for “Voyage” and you can see the video here on GRM Daily....