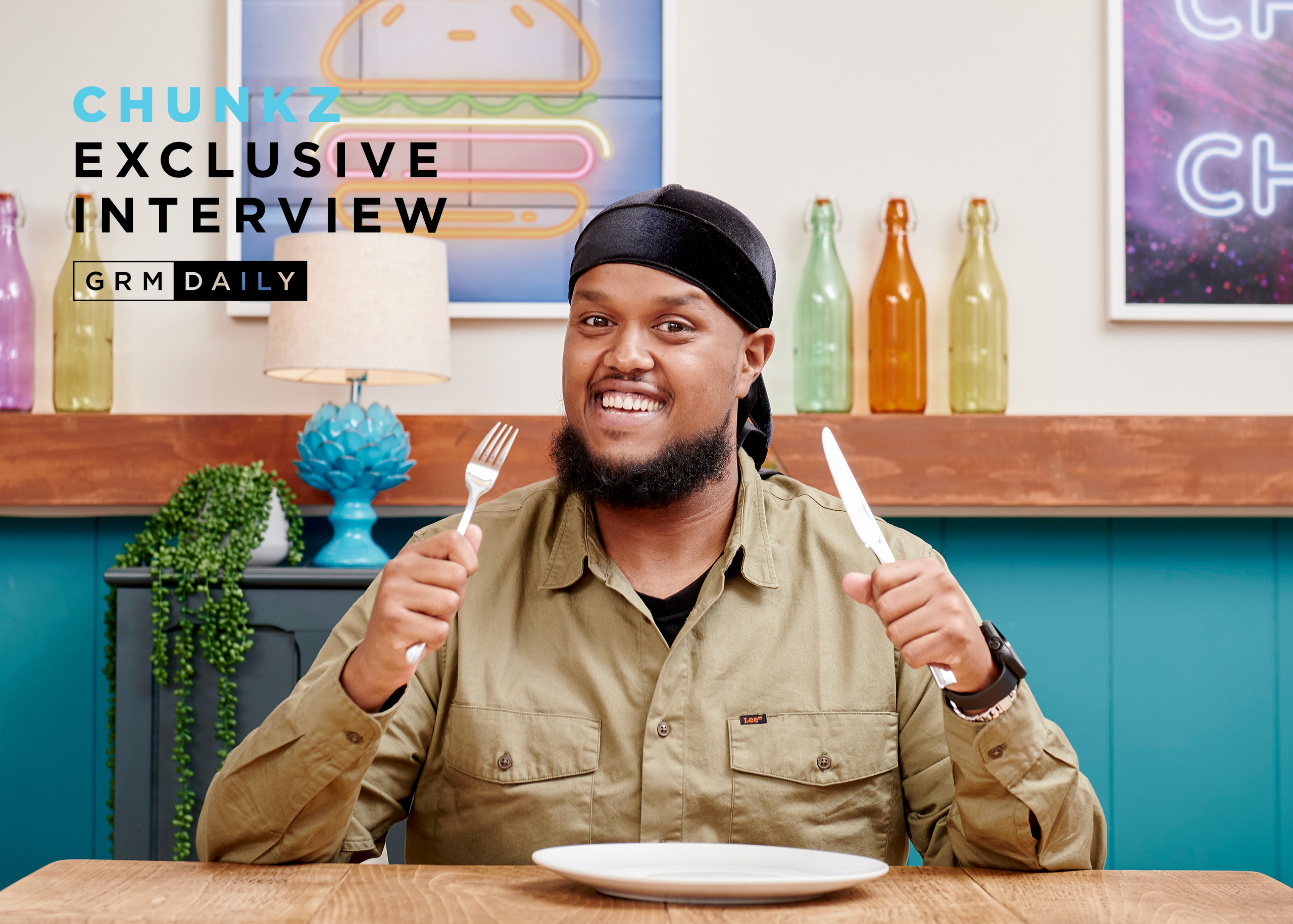 When you think of the biggest online personalities, you can’t go without mentioning Chunkz, who has made waves throughout different avenues of his career as a king of content creation through his own natural comedic values, infectious energy, and humble attitude. Naturally, a lot of steps have been taken since his background in YouTube exceeded all levels of expectation, with Chunkz going on to branch into hosting prestigious events like the MOBO Awards to co-hosting Sky Sports’ Saturday morning show #SaturdaySocial and much more.

It should only feel natural, now, that the efforts of his grind have opened up a brand-new avenue for him as he’s now set to front his very own cooking show on ITV, ‘Bad Chefs’. The ten-part series has been branded ‘the ultimate recipe for disaster’ and will see ten takeaway addicts take on the ultimate challenge as they ditch the delivery apps and learn to cook for the very first time. Rated Award winner Chunkz will oversee the kitchen commotion as the cooking competition unfolds – a show that will combine the rising star’s personally improved cooking knowledge and his natural on-camera charisma.

We sat down with Chunkz to find out more about the process of filming for his first-ever TV show and delved into his own fitness journey and career goals that he continues to work towards.

Congrats on the new show – this is deffo a new avenue! How excited are you for this to launch?

“Thank you! I’m very excited, like you said, it’s a different avenue, something I haven’t really pursued or done; having my own TV show. It’s something obviously that you – especially when you’re in the industry that I’m in and in entertainment – you have to have your own TV show at one point, so the concept made sense to me and it’s something I was very excited about and yeah, I can’t believe it’s finally coming out in September.”

Are there any existing cooking shows that you enjoy watching?

“Yeah, I loved ‘Come Dine With Me’ and ‘Masterchef’ – those two, off the top of my head, I definitely remember loving and always wanted to be a part of it even though I couldn’t cook, but yeah, those two are definitely highlights for me.”

I’m sure a lot of interesting things happen on the show –  but were there any disastrous moments in particular that stuck out to you whilst you were filming?

“Yeah, anything a girl called Charlotte in the show did was a disaster, to be fair. There were times she did like undercooked chicken, so she was trying to give me salmonella, the girl tried to kill me with food poisoning! Yeah, there were hilarious moments, people tried to burn the kitchen down, there were so many crazy situations that happened in the kitchen. We had a medic on standby and he was used like over 50 times throughout the course of it, he was overworked!”

Did you learn anything while filming the new show?

“That people are actually very dumb, and that’s what it is! I became close friends with everyone, so they won’t mind me saying that. Yeah like they’re amazing, loving people, but when it comes to common sense in the kitchen, it’s really lacking, and it’s made me realise that there are people out there that actually can’t stand a chance in the kitchen. And that’s what this was about – it was about trying to get the most clueless chefs in one kitchen and actually try to make them a bit better and I think that we achieved that from this series, definitely.”

Can you take us back to the time during lockdown when you started getting into cooking more – were there parts you particularly enjoyed or things that you found the most challenging?

“Yeah, obviously there was a situation when all of the restaurants were closed – my local Nando’s was closed and I was devastated because that’s all I used to eat; I’ll be very honest, I couldn’t cook. But luckily my personal trainer, who lived with me at the time, was laser focused on getting me to start cooking and stop being lazy, so we started off with just like the easy meals, like veg and chicken.

“Then we started to upgrade it and started to do spag’ bols, fajitas, and then it got to a point where they were calling me Gordon Ramsay within three months because I was just cooking up everything in the yard. Yeah, I don’t like to blow my own trumpet, but let’s just say Michelin star! But all jokes aside, it was a thing where I kinda had to learn, otherwise I’d be nyamming nothing. It was a ting where it was just pressure.”

On a scale of 1-10, if you had to give pre-lockdown Chunkz a rating on how good the chef’ing was, what would you say?

So, do you feel like you would’ve been eligible for ‘Bad Chefs’ yourself? Or do you not think you were on that level?

“I’ll be honest, I would’ve been top 3 chefs based on how I used to cook, it was that bad. Like my toast was dangerous, I had a dangerous toast on me. I had a good beans as well and a good egg, so you can’t really play with me! It’s funny but I swear to God, that was always solid for me. And I could do a good cereal as well with the ratio of the milk, like the cereal was good, but yeah that was pre-lockdown.”

You have a huge following from a younger audience especially, so I think this could be really good for them in a way to see that you don’t have to stay on the food apps. Is there a word of advice you’d give kids that aren’t wanting to get into fitness/healthy choices?

“Yeah, just experiment, you know what I mean? Try other things and see if you could potentially like it because I’ll be honest, I hated gym in the first place and I still don’t really like it too much. But I feel like it’s a way of life, it’s a way to keep you fit and healthy and to avoid all these horrible health problems that like can come and touch you when you’re like 40/50 years old.

“So I feel like it’s very important to try and stay fit and try and eat healthy whilst you’re a kid and work out whilst you can, because who’s to say that randomly you don’t just get some situations in your body and you can’t recover? You may as well just try and fix it from early. Obviously, I don’t eat healthily all the time, but I just try to make sure I burn the calories. Sometimes your motivation dips and your discipline dips, but as long as you carry on going on that straight path, you’re good to go man.”

How did filming this show differ for you compared to doing YouTube or your other content creation?

“It was very different; obviously with YouTube, I pick up a camera and put it on the tripod and I waffle for 20/30 minutes with my friends and we end up getting a video out of it. Whereas, TV is much more regimented, it’s much more structured, you have a whole production team telling you what to say, what to not say. Luckily, I was with a team who let me take creative control with my own show.

“Also, obviously, the days are long, I was filming for about 12 hours so everyone better love this because we put our blood, sweat and tears in this one! But obviously with YouTube, like I said it’s very different because it’s much more simple, I think, and it’s much newer. Whereas, TV is like the classic way of doing things and that’s also fun to get involved in because I got to see the YouTube point of view and now the TV point of view, so it’s sick that I got to experience both.”

Is there any other avenue that you haven’t explored yet that would you like to in future?

“Films; movies, I’ve said this loads and that’s definitely one I haven’t touched on. I say this but I haven’t actively tried to do anything! So I need to stop waffling and actually give it a go. I’ve called out my brudda Ashley Walters, I’ve told him to give me a role in Top Boy but he ain’t serious, he ain’t go back to me so I’m just gonna have to humble myself and maybe make my own documentary on my own YouTube channel, so yeah.”

What has been your family and friends’ reactions to the new show?

“My mum and dad are confused as to how I got my own TV show from just doing YouTube because they’re like, ‘don’t you have to be famous to do it?’ And I’m like ‘yeah, there you go then’! Just taking the mick out of me. But yeah, all jokes aside, they’re very proud of me, they’re proud of anything I do, so, when I told them about the opportunity I got given by ITV they were definitely made up because me and my dad use ITV to watch the football etc and it’s a big brand, so to work on them with this, it’s been special, definitely. So, yeah, everyone’s proud in the camp.”

‘Bad Chefs’ airs on weekdays at 9pm on ITV2 from Monday 26th September.