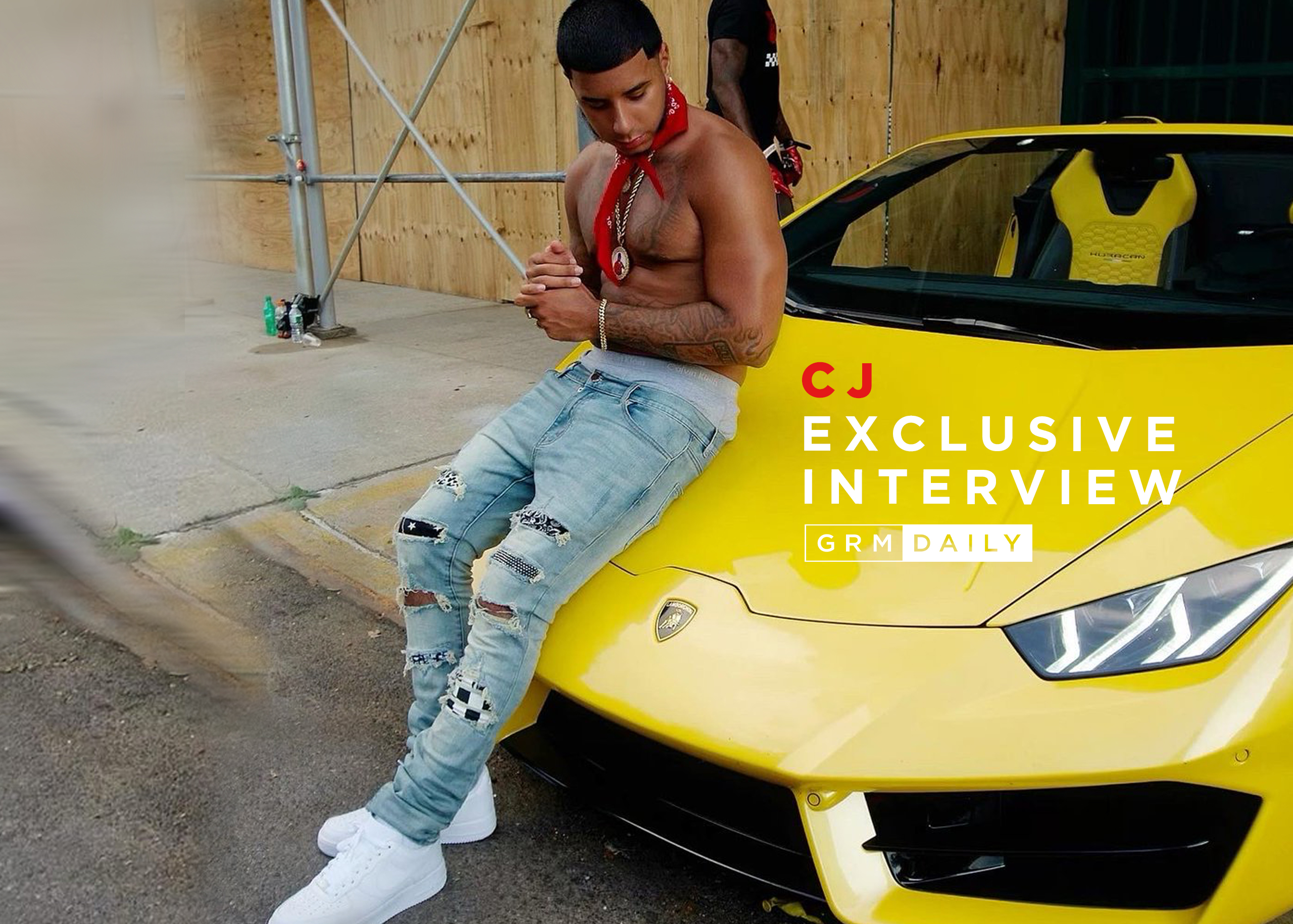 2020, undoubtedly a year for the history books. Despite the pandemic, the music industry still managed to adapt and flourish, bringing forth an array of new talent: CJ being one of those names and someone who blew up in the midst of it all.

His platinum-selling debut single “Whoopty” catapulted him into the forefront of the music biz and reached amazing new heights; with him since crossing paths with rap heavyweights such as Drake, French Montana, Offset and more. We recently had a chance to catch up with him about it all!

Starting off at the beginning, “Whoopty”, the big single. How it did it feel to go viral? It feels like we’re in a time where music can literally kick off over-night.

“I was on YouTube one day listening to beats. I never did a drill record before so that beat caught my attention. I just downloaded it, put some vocals on it. I felt so strong about it, that I ended up shooting a video like two days after I recorded the song, after that I put the video out. I wanna say maybe like a week with the video being on YouTube, it just started buzzing, crazy“

“It’s pressure. Everyone’s expecting another hit soon. The music industry moves so fast nowadays that a lot of fans and supporters, their attention span is short so they’re expecting another record to come a week or two after that. So theres pressure but when you’re recording music you can’t go in the booth trying to follow up another hit, you gotta just have fun with it, let it be natural“.

Congrats for going platinum with “Whoopty”. You had the New York remix and the Latin remix, how did those come about and what was your thought process in picking the features?

“French, me and him have been working together since I first started going up. He was one of the first artists to reach out and at the time Rowdy Rebel and Bobby [Shmurda] were coming home. They play a huge part in hip-hop and in New York City so we just felt like if we can’t get Bobby lets work with Rowdy – they’re both two super dope artists. We reached out to rowdy and he was like ‘yeah it makes sense’.

“And so the Latin mix, Ozuna reached out to me and my team and he was like ‘yo I wanna work with you, I’ll send you a few records and I want you to lay some verses’. And then for “Whoopty” I was thinking of doing a remix and I wanted to do a Latin mix. It just made sense because him and Anuel AA just came out with an album, they just wrapped up their album so thought why not have them both on the remix. They’re two huge names in the Latin world.”

So you’re Puerto Rican, of Latin heritage. Is working with more Latin artists and putting out more Latin-influenced music something you want to do?

“For sure, as soon as I did the Latin mix a lot of Latin artists started reaching out to me. Me and El Alfa – who is huge in the Latin market, he does something called Dembow, he’s a superstar – me and him got a couple records together. I got some other record in the Latin space with other Latin artists, I’m definitely going to be in and out of the hip-hop and Latin spaces.”

Going back to New York, it feels like right now it is one of the biggest hubs for music – you guys are doing your thing. For someone that’s not from New York, what would you say the differences are in areas like Staten Island and Brooklyn for example. Do you think that has a major influence in your musical styles?

“For sure, we all come from different places. I’m from Staten Island. Pop Smoke (R.I.P), Fivio Foreign, they come from Brooklyn. I feel like we all come from different places but it’s all the same thing. We all have the same story at the end of the day. New York is small, everyone knows each other, we got our own style, our own flow. I can’t really say it can be compared to any other place in the world. We talented and that’s all that matters”

Circling back to the pressure and putting out a follow up to “Whoopty”, you had “Bop” which was a great follow up. What was the thought process behind that – was it let me turn out another hit or it just happened?

“It’s crazy because maybe for like a week I was just going to the studio, just messing around. When I recorded “Whoopty” it was smack in the middle of quarantine so all the studios and stuff were closed. I think that week my studio first opened back up, I was like I need to write some records now, play around, put on some drill beats. So I think I recorded “Bop” and “Whoopty” in the same week if I’m not mistaken. I wasn’t even thinking about a follow up as “Whoopty” weren’t even out yet. I was just having fun.“

Moving onto your debut project, you had French Montana executive produce it which is huge. You mentioned you guys have been working together for a while now, so how did the working relationship come about?

“French reached out super early he said said he loved everything I was doing and I had his support. He said “Whenever you’re in LA come by the crib’ so when I got out to LA I went and stopped by his house and we just connected automatically. It was super genuine and we recorded like six songs, it was crazy! Was just locked in. He was like ‘so I wanna help you out’ and I was like that’s perfect because I’m coming out with an EP, you wanna guide me? And he was like yeah lets do it.

French, he cares about peoples growth and the music. It’s really nice to see

Yeeah especially with artists coming outta New York, he always goes out his way to support the up-comers.

So talk to me about collabs. You had the Dream Doll single recently “Lil Freak” – another New York rapper. That was really cool and it felt like a more melodic flow from you on that one. So as far as collabs with the ladies in particular, is there anyone you wanna work with?

“For sure. We were trying to get Cardi for a little while, she’s super dope. She’s a super busy artist but one day we gon’ make that happen. I like Saweetie, Mulatto, Doja Cat – she’s on fire! She’s on my team too so wanna make that happe. City girls are on fire. But we really trying to get that Cardi feature ASAP. She had reached out me, Offset reached out to me, it’s all in a matter of time.”

Do you have a dream collab, dead or alive?

“I really wish I could’ve had the chance to work with Pop, he was at his peak when he passed. I was a huge fan, always listened, always supported his music so that would’ve been a dope collab. I also wanna make a song with Drake one day. I linked up with him not long ago, a few weeks ago we we’re in LA at an Oscar after party, he came up to me and was like ‘keep doing your thing’, hopefully one day we get to lock in“

So something more light-hearted, you mentioned Saweetie. She does a lot of quirky things – she loves an oyster, hot Cheetos and things like that. Do you have any weird combinations or life hacks.

“The only thing people think is weird is I have a thing for honey. People are like ‘ah that’s gross that nasty’. I’ll take a bottle of honey and just pour, that’s just my thing. It don’t matter if I’m sick or not, I just drink it. Its good for you though so not that bad.”

Transatlantic collaborative tracks at a high in recent times, the turn out has been impressive with London and New York artists in particular linking up. Fivio Foreign appearing on the Russ x Tion Wayne”Body” remix, Shaybo and Dream Doll joining forces. We were keen to find out whether CJ had any plans to hit the studio with our homegrown talent.

Before I let you go, are they any UK artist you know of and want to work with?

“A lot of people send me his page, I been in tune with him from a little while – Fredo. People tag me in his stuff a lot so maybe one day we can make that happen“

Do you have any plans to come to the UK, post lockdown?

“Yeah definitely! My fanbase over there is crazy, hundreds of fans and supporters DM me asking me when am I coming so hopefully after all the Covid stuff we can make that happen“

So you’ve just dropped “Hit Up”. Sick single! What else can we expect for the rest of the year?

“About to lock in, dropping an album like late September. So putting out singles right now. I got a single, it’s a feature with El Alfa. A Dembow record that I did with him, that is going crazy. When I tell you it’s got the clubs, TikTok everything. Its called “La Mama”, that s**ts crazy. Happy I’m a part of that. Couple more singles, more features before my album comes. And my album is gonna be legendary!”

Look out for his debut album which is set to land this year! But for now check out his latest single “Hit Up” and “La Mama” alongside El Alfa. April this year also saw him release a deluxe version of Loyalty over Royalty featuring the “Whoopty” remixes, “Lil Freak” and a few more new drops which is sure will tide you over until we hear some new heat.