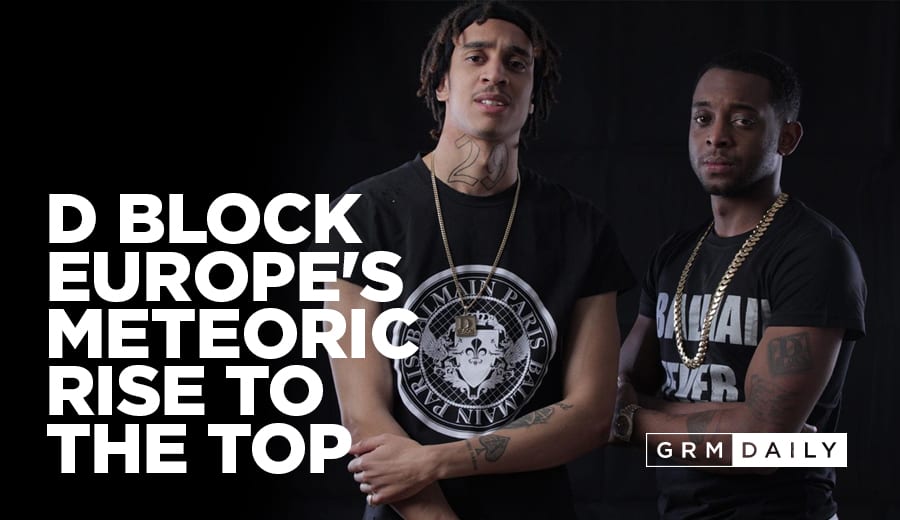 If you ask most UK rap fans to compile a list of their favourite artists, chances are D Block Europe’s name will not only be mentioned; but be placed at the very top.

D Block Europe are now at the point of potential stardom. Sharing their raw tales of the streets in melodic fashion, Dirtbike LB and Young Adz have undoubtedly perfected their sound and nurtured a style of music synonymous to their name.

Their chemistry is the result of years of friendship, shared life experiences and of course, hours upon hours of experimentation in the studio together. With D Block Europe’s release of their third mixtape of the year Street Trauma upon us, it was only right we look at their meteoric rise.

@youngadz1 taught me how to rap !

Back in 2013, the legendary Jadakiss came over to the UK to introduce D Block Europe to the scene. With the UK rap scene still very much underground, it was telling of Jadakiss to identify a potential star in Young Adz.

Though for Young Adz, he’s been destined to become a rap star ever since he was a young teen.

When he dropped “3style” as A.D.A.M and with tracks like “Dope As It Gets”, and many more thought-provoking freestyles, he evoked a maturity and talent way beyond his years. Whilst Dirtbike LB didn’t rap at that point, he was still in every single one of Young Adz’s videos. They’ve been together from the start.

With the attention Young Adz was generating, it was only a matter of time before the record labels came calling. His deal with Universal was well publicised at the time, but it didn’t generate the success people had hoped for.

Put it down to label politics, or a learning curve. However, it was Jadakiss’ ambition to extend D Block’s frontiers into Europe which transpired to be the real opportunity for Young Adz to realise his full rapping potential.

D Block Europe were initially made up of Young Adz and Aero Sinc, with Dirtbike LB coming into the fold rapping wise a little later.

They went on to drop a collective of freestyles and tracks together like “Ringing” and “Squad” which still generated hundreds of thousands of views but it wasn’t the content that many of Adz’s fans were accustomed to.

Perhaps what people hadn’t realised, nor appreciated was not only were Young Adz and Dirtbike LB rapping about the realities of the life they were living, but they were also experimenting with different flows and sounds in search of defining their own style.

A defining moment sound wise was the release of “3 Gutta Remix” in 2016.

It was at this stage that the pair began to experiment with a flow and style that is identifiable with their current, more tone defined, auto-tune delivery of rapping.

Now, when you look at D Block Europe, you have two artists with range in their melodies and the ability to sculpt their endearing stories through their lyricism. They complement one another stylistically, through Young Adz’s raw story telling ability and the sauce that Dirtbike LB delivers on tracks.

This has enabled D Block Europe to elevate their sound to new heights.

There is no reliance on catchy hooks or a compelling instrumental. They’ve got bars. They’ve got flows. They have the complete package to create hits. Although it’s fair to say that Young Adz has arguably positioned himself as the ultimate hook master.

The release of “Traphouse” and in particular “Large Amounts” in 2017 opened new avenues and exhibited their ability to portray the lavishness of their gritty street experiences through their melodically delivered rap.

Through these singles, they generated an excitement and anticipation for their next track. This was perfectly taken advantage of at the start of 2018 when they released what is perhaps their most well-known track “The Shard.”

D Block Europe had found their sound. When “Mazzaleen” dropped shortly after that, it was at this stage Dirtbike LB and Young Adz cultivated a reputation as serial hit makers and created an expectancy to deliver hits every single time.

Through the success of their joint mixtape Any Minute Now in the summer of 2018 with Yxng Bane, D Block Europe experienced chart success (top 20) which exhibited their ability to create tracks which not only resonate with the streets, but the entire UK rap scene.

Chart success was then extended for D Block Europe with “nASSTY”. With a level of consistency that is only matched by very few, D Block Europe occupy a unique space in UK rap where they will only go from strength to strength, and that is what makes their elevation so exciting.

Street Trauma promises to be a project which will undoubtedly open even more doors for D Block Europe and the UK rap scene as a whole. Check out the waves for yourself right here.

And to think, from what Young Adz and Dirtbike LB have expressed, this is only just the beginning of things to come.