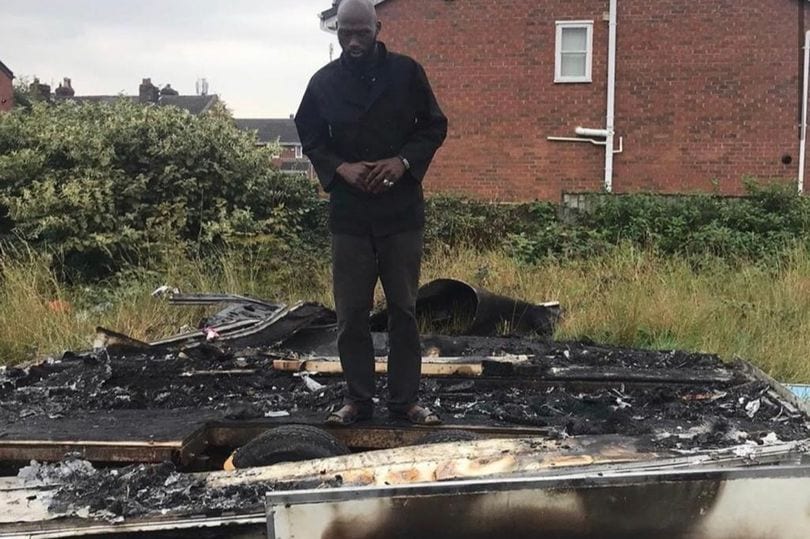 A Manchester chef whose food truck was recently destroyed by racists now is now back in business after getting a new van!

Back in September, Nigerian-born chef David Olalekan Kamsonhas caused a huge stir on social media after news broke that his food trailer had been destroyed in a racially-aggravated attack in Moston, Manchester.

After being racially abused for months, David found his food truck had been stolen and torched last month.

“I came back from York on Monday night and walked past my trailer and it was still there,” David said when speaking on the incident. “The next morning I went to the Post Office and the guys in there asked me what had happened to my trailer.

“They told me that it had been on fire and that it had burnt to the ground. When I saw it, I cried for almost five hours.”

After David posted pictures on his Instagram page which showed the trailer completely destroyed, a GoFundMe page was launched in which more than £80,000 was raised to help the chef restart his business and he now has a new van!

David took to Instagram to announce the return of his food business, which re-opened yesterday (October 25).

“Ladies & Gentlemen …. To Say A Big Thank You to Everyone Who has Supported me … I have Mastered “PHEONIX “ and im Ready to Serve you at The Hatch Tomorrow,” David wrote.

He added: “Bring you Children , Bring your Loved ones ….. History Is About to Happen !! Thanks to You and Thanks to Moston Community of Manchester City Council.”

Drum Rolls ………… Ladies & Gentlemen …. To Say A Big Thank You to Everyone Who has Supported me … I have Mastered “PHEONIX “ and im Ready to Serve you at The Hatch Tomorrow!! To Avoid Confusion for Elderly People who lives Far away … and To Really Recieve The Blessing of the Community. I think I will Stick to My Plan of Staying at Moston Albine Street Car Park So Tommorow We Eat Healthy at Car Park , Albine Street (off Moston Lane ) – Opposite Moston Superstore Bring you Children , Bring your Loved ones ….. History Is About to Happen !! Thanks to You and Thanks to Moston Community of Manchester City Council . See you @2:30pm tmr ❤️❤️❤️❤️❤️

David’s story is one of resilience and community spirit and the announcement of his new truck is some much-needed good news.

Head over to David’s Instagram page, @mostonsuya, to check out his re-launch went!