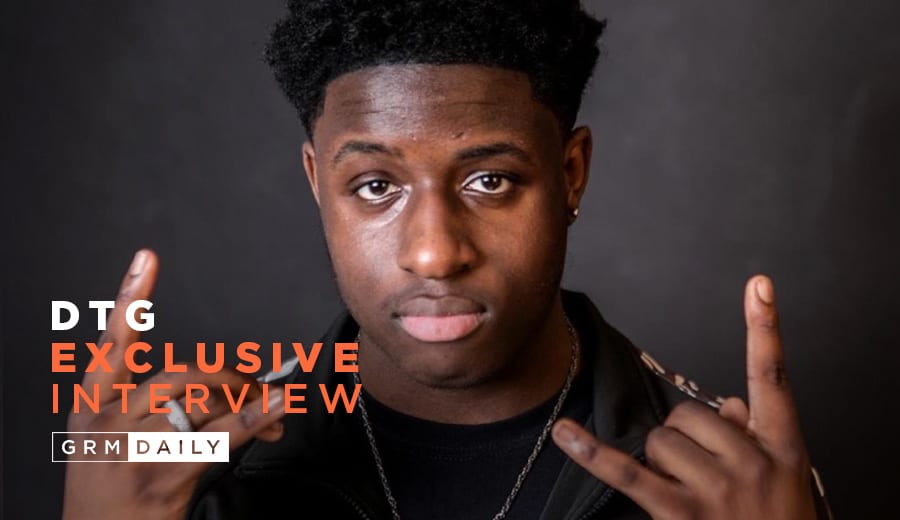 DTG is one of the hottest on the scene right now and after featuring on Simba’s track “Rover” he’s reached the top three in the UK charts at just 20 years old. DTG, formerly known as YouTuber ‘Deji The Gamer,’ has seamlessly transitioned over the past two years into the music industry. Humbleness and dedication came across strongly over the phone as GRM got to chat with DTG about his latest song “Dem Boys”, his chart success, and the day he hung out with Pop Smoke.

First of all, congratulations as “Rover” has hit number three in the UK charts. How does it feel having a top ten?

“Thank you very much, it’s crazy really, it goes against all odds. Nobody really believed in the song before it came out, and it took a lot for us to release it. It’s just really sick considering I’m someone who was previously a YouTuber and has come into the music industry, it’s a lot harder. Yes, I built my platform as a YouTuber but it’s still difficult to be taken seriously as a musician.”

How did the collaboration with you and S1MBA come about?

“That’s a good question because it was so natural. My producer is my partner in this thing, we have sessions quite a lot and he produced “Rover” he also works with S1MBA. I went down to Chocolate Factory, and PepStar owns the studio called ‘North Star Studios’ in North London.

My session was ending and S1MBA walked in and he was like ‘Yo nice to meet you, I got this song I want to show you called “Rover”.’ I heard it and I thought it was a good song, but I kinda just felt like it was only a ‘good’ song, I didn’t feel like there was anything mad about it.

S1mba asked me if I wanted to do a verse and literally within five minutes the verse was written and recorded. I heard it back and I was like hold up, this is so sick. You know what it is, sometimes a song is just missing a feature. The day we met, within the first ten minutes we had completed the song and the rest is history.”

How did it feel proving those people wrong that didn’t believe in you?

“That’s the best feeling, proving someone wrong. You know what’s so funny is when I was still doing YouTube, I did a video where I was looking through my old Facebook messages and I remember a certain guy in 2011 messaged me all of these horrible things and I ignored it. Recently he followed me on my socials and he messaged me asking for me to follow him back! I did because I’m a nice person, we were kids at the end of the day.”

Is a Rover your dream car?

“I grew up with a BMW family, so I feel like I might have to get a Mercedes. I just like things that are different, everyone’s got a C Class or something. One thing I will tell you that stands out right now is the Lamborghini Truck or a Tesla.

What’s the meaning behind your new track “Dem Boys”?

“I made it the day I hopped on “Rover”, I write from the heart so people can relate to anything I make. “Dem Boys” is about those people in life that you’ve had a falling out with, and as someone who is out there I have many people who hate me for no reason. The song basically says F*** the haters but in a very happy way. I’m not on an aggressive ting, I’m just here for the good vibes”

At what point in your YouTube Career did you realise you wanted to make music?

“It was at that period of time when Diss tracks on YouTube were a trend, that’s kinda when I got my first studio experience. Shout out Jallow and S7VEN who produced “Theresa” for me. It was just us three in the booth, that was my first experience recording.

I liked it. I had to make it up on the spot because you have a set time. With the whole Diss tracks thing you have to reply as quickly as possible, like when Chip and Bugzy were going at it. The actual thing that made me start music properly was in 2018 when a lot of people in my friendship group at the time were releasing music. AJ & Deno dropped “London” which was sick for them.”

Did you believe that you could make it as a YouTuber turned Musician?

“There were quite a few YouTubers who were dropping music and I said to myself ‘I can do this.’ I’ve been singing for a very long time and never actually told anyone. I thought to myself that I might as well show everyone what I’ve got.

That’s when I dropped my first song, which did alright, but it wasn’t that great. What’s funny is that I didn’t think that I was going to make another song after as I wasn’t really too happy with what I had created. I was comparing my first song to the success of anyone else’s first song.”

So I’m guessing you’d say you’re a perfectionist when it comes to music?

“Definitely, I pay attention to feedback a lot, initially when I dropped my first song, I read the comments and they could be quite harsh. I was taking in the feedback that said ‘Too much of this’ and ‘Too much of that’ and they were right.

I saw your Instagram post dedicated to the late Pop Smoke, how did you end up meeting him and did he influence you as an artist?

“One of my guys is well connected with Pop Smoke’s cameraman and DJ. When they came to London they invited us round for a little get together and we just sat there talking all night! The day after they invited us down to Tape and that’s where Pop had his own booth. It was a surreal night, it was just mad weird, we went back to his hotel room afterward and we just chilled for time”

Really hope this isn’t true. Praying that Pop’s still alive and they’ve gotten this all wrong but it’s not looking like that … Life’s too fucking short man Rest In Paradise BigWoo #rip #popsmoke

“With him, I was very shocked by how humble he was. It was very similar to when I met Aitch as he’s obviously young and doing his thing and has a lot of hype around him. I know a lot of people who aren’t even near his position who move mad.

When I met Pop Smoke I was like rah, he’s got everything. I was comparing myself to him as a person, he was younger than me. He would’ve been twenty-one this August and I’m twenty-one in two weeks. He’s a sick artist, many people know him from the Drill music that popped off for him, but on his projects, you hear another side of him. It’s inspiring.”

You also shared a photo of you from when you were at school, what were you like growing up?

“Funnily enough, that photo was taken the one year I spent in a public school where I became naughty because I actually grew up in private school. That photo was my last day of school as I got sent to Nigeria shortly afterwards for 3 years. That’s where my singing career actually began.”

What was it like living in Nigeria for three years?

“It’s really beautiful over there, it’s not the western world. Instead of materialistic things, it’s more talent. There’s a lot of talent in Africa, the school I went to talent was embraced a lot. Being able to sing over there is basically like being rich, the girls love it, I couldn’t believe how much respect you get for being able to sing.

One night at school I joined in as I knew I was able to sing and they were like ‘rah you can actually sing?’ I was gassed. The news spread around and I used to get stopped and people would ask me to sing. I entered this singing competition called “Fame” and my partner and I came fifth, Nigeria is sick.”

Have your family always been supportive of your career growing up?

“When I told my dad I wanted to start a YouTube channel I obviously needed his help to fund certain things at the beginning, and he told me because of how passionate I sounded about starting my channel that’s the only reason why he let me do it.

Having an African dad they normally want you to go down the academic route but he was quite supportive of me starting the channel, same with my mum, but I guess there’s only so much they can do as it’s all down to me. My parents are quite religious, but they’re very proud. I don’t think they really understand how much of an achievement being in the top three is. Even for me this is all mad because it’s all happened so late, not like the song was released 40 years ago but the way it started to blow up, it’s mad to take in.”

What’s next for you?

“Once this lockdown is officially lifted it’s only right to have a big motive to celebrate freedom again. Still keeping the 2m distance, you can’t trust anybody! I’m sitting on a lot of content, I’m just working towards finishing off a project properly, you lot can be expecting a first project from me. I do know my next single and I might drop a freestyle on my birthday. I want to be consistent and drop my bangers really, so watch out for that.”