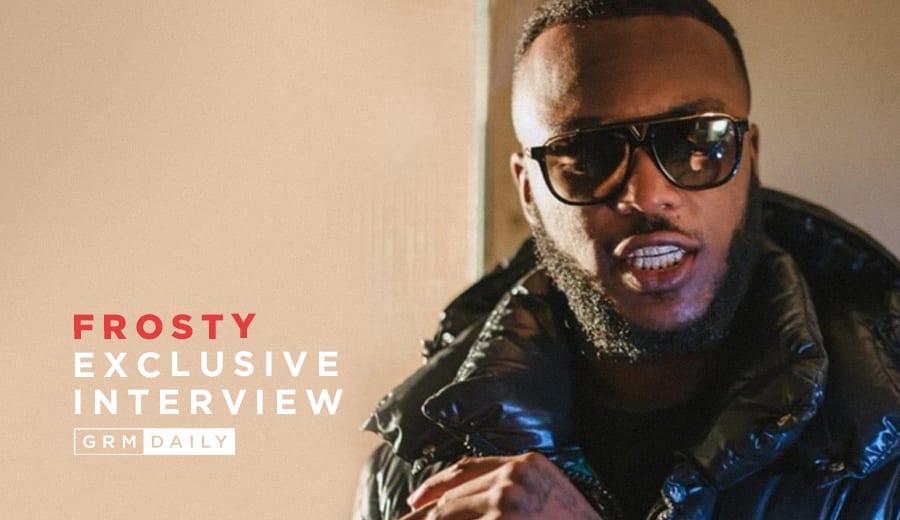 Frosty is by anybody’s measure, cooler than his name would imply. He is a man of few words, but when he’s enveloped by haunting 808’s and sizzling hi-hats – oh, and behind his iconic black shades – he puts his glittering gift of the gab on display.

His breakthrough single, “County Lines 1”, uploaded to YouTube through a random channel, devoid of any visual compliments; amassed millions of views while he was serving time in prison. There’s something you don’t see every day.

Frosty’s bleak accounts of life on the roads, combined with his remarkable ability to manipulate rhythm and flow, separate him from everyone else. GRM Daily caught up with him earlier this week to talk life in jail, Under Surveillance and more.

Tell me about your upbringing, where were you from? What was it like?

“I’m from Streatham, South London. It wasn’t too bad, I can’t even cap. I was in and out of school, but I did finish init. Those were my fundamental years.”

Who were you listening to growing up?

When did you start rapping?

“County Lines” was RINGING while you were in jail. Did it have the same impact in jail? What was that like?

Did you become embittered by the fact that you were in jail while it was going off? Or did it make you more hopeful about life after jail?

“It was frustrating at times, don’t get it twisted, but when you’re in a situation like that, you’ve got two options: are you gonna let it affect you, or keep going?”

I think a lot about artists that step into the game on a super high, kind of spend the rest of their career chasing that same high. Did the “County Lines” huge success put you under more pressure? or calm your nerves?

How did dropping “H20” fresh out of jail feel? What was your reaction to its reception?

“If I could go back and change it, I probably would. I would’ve released something different; just cause it was a bit of a commercial one, you get me.

“I would’ve dropped something a bit more raw. Just ‘cos I’d been waiting to release for so long. I’m not sure what I would’ve released if I could’ve done everything differently, but you know what, it done what it needed to do. I can’t even complain, it’s still getting streamed on all platforms, so I’ve got to big everyone up for that.”

I’d liken your flow in really simple terms, to a stone skipping over water. You paint pictures in really unique way, as well. Did you just wake up rapping like that or was it nurtured over time? What rappers influenced that?

I’ve heard a million stories about the life you rap about. How did your time develop you as person/ what scars has it left?

“Obviously, you go through certain things. Like I’ve been to jail twice now init, so it’s definitely gonna have some effects. It just makes you wiser and know better in certain instances.”

What is like transitioning from one life to another?

“I’m pretty good at dealing with things head on so I don’t really think it’s even had an effect like that, you get me.”

It feels like I hear you get compared to somebody new every day. Are you complimented or offended by those comparisons?

What’s the best song that you’ve made?

“I think “Free Bae” with LB, that’s my favourite. It’s the song [from the mixtape] that’s been sitting there for the longest. It’s the tune I walked into all the labels with when I was trying to get my deal and every label was fucking with it.”

Dead or alive, who would you love to make a song with?

What do you want to tell everybody about the mixtape?

“It’s definitely for the bando babies out there.”

Be sure to buy/stream the debut tape below right now!