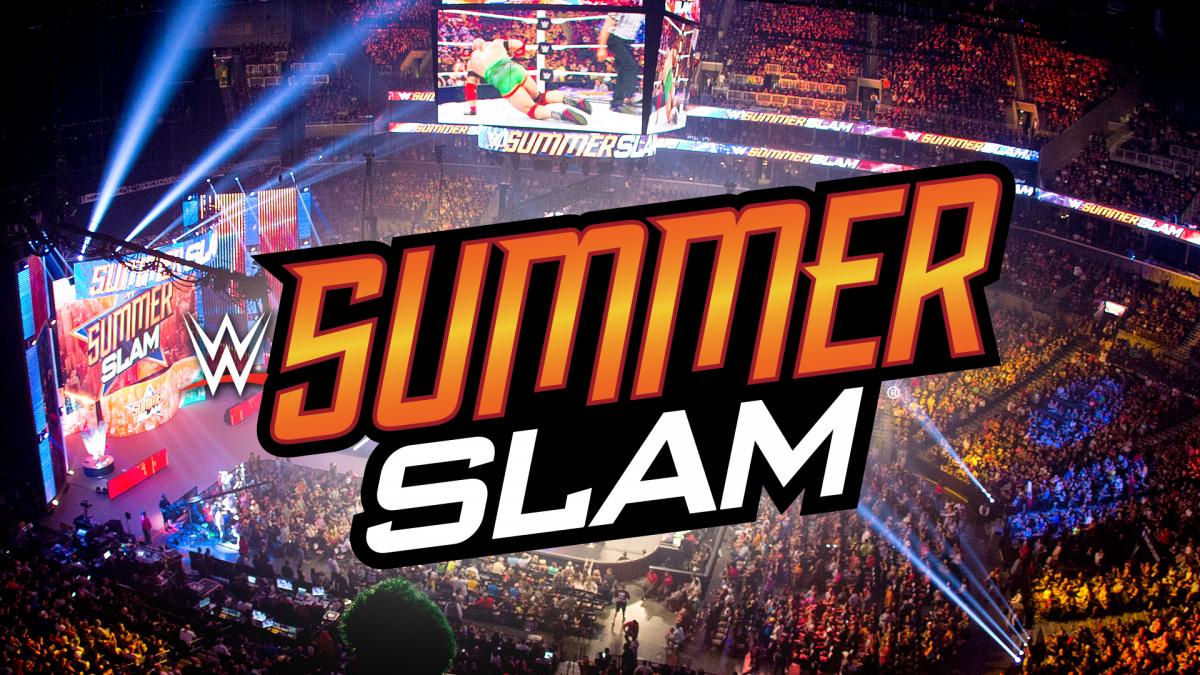 Earlier this year, GRM Daily gave our coverage on WWE Wrestlemania. The team gave our predictions and we engaged thousands of people on social media with our hashtag #GRMMania. So we thought that we would bring back the hype by covering the “biggest event of the summer”, Summerslam. WWE’s No. 2 annual spectacular, SummerSlam, will emanate live from Brooklyn, New York, on Sunday. The company’s second-biggest pay-per-view, this year’s event comes one month after the draft that split the company between Raw and SmackDown brands.

WWE is leaning on its top stars for SummerSlam, as evidenced by the match card. Brock Lesnar, Randy Orton, John Cena, Dolph Ziggler and Chris Jericho have prime matchups at The Biggest Party of the Summer, which isn’t surprising. While Seth Rollins, Dean Ambrose and Roman Reigns have dominated WWE programming over the last two years, it’s the company’s biggest names who draw attention. Not many casual fans may know The Shield, but plenty of people who pay attention to pop culture or sports in general know Lesnar and Cena.

That’s not to say The New Era won’t be represented. Sasha Banks, Charlotte, Kevin Owens and AJ Styles are all early in their main roster careers and have prominent spots on the card. Enzo Amore and Big Cass might be the hottest tandem in WWE, and the New York natives are an instant sell to the raucous local crowd. Then there’s WWE‘s newest call-up and potentially its biggest future star, Finn Balor. The company is shooting him up the ladder, featuring him in one of Sunday night’s headline matches against Rollins for the newly introduced WWE Universal Championship. SummerSlam is one of WWE‘s pre-eminent events, and the company is holding nothing back in putting its biggest stars in prime positions. Who will be the biggest stars of the night, and what does SummerSlam have in store for them?

GRM team members Cam and Natz offer up their perspective on the stacked card and make their predictions as they prepare to do battle for the GRM Heavyweight Championship on Sunday Night. Remember to get involved via our social media and make your predictions too with the hashtag #GRMSummerSlam

On first look, it may seem that Smackdown may not value their exclusive Women’s division by holding a classic “6 woman tag” but I see it as a great way to display their female talent, both well known and new. Alexa Bliss and Carmela have got the call up from NXT and seem to be impressing while surprise call up Eva Marie seems to be embracing her role as a hated heel by “getting injured” and having pre-constructed wardrobe malfunction before matches meaning she can’t wrestle. Becky Lynch has stepped up as the show’s main women’s wrestler, Naomi gained a new entrance/competitive fire and Natalya’s gone full heel. Whatever team wins, all ladies will be looking to impress as the rumours of a Smackdown exclusive Women’s title gain momentum.

This match has a lot of potential to build a long-standing rivalry. Apollo Crews is being dubbed as the ultimate athlete with incredible dynamic ability and The Miz has, time and time again, cemented himself as one of the most creditable heels on the RAW roster. This is a classic good-guy vs bad-guy match that is sure to provide some great spots from Apollo Crews as he looks to take his first belt since debuting the night after Wrestlemania, the same night The Miz won his intercontinental title from a defending Zak Ryder. Maryse will certainly have some involvement in the match, and Crews will put up a great contest in order to make this match a classic and bring prestige to the Intercontinental Championship.

Even though I would love to see Enzo & Cass in the tag team championship picture since their John Cena endorsement, this rivalry has actually brought the best out in the Staten Island duo. The promos between the two teams have always been entertaining and the matches that Enzo and Cass have put on separately have been telling of their talent. owns and Jericho are making the most of their dickish heel roles and Jericho, as always, is a pro on the microphone. Enzo and Cass are heading to the big city they call their backyard for a tag team grudge match with the two Canadians who have given ’em hell. This one should turn out a solid matchup that hopefully gets rolling with some pre-match promo The bigger questions are, will the pairing of Jericho and Owens carry on as a team and when will Cass & Enzo get a title shot?

First of all, it’s shocking that the two tag team matches both come from the RAW Brand when Smackdown is meant to be crowning exclusive tag team champions in the near future, but hey! At last year’s Summerslam, the New Day won the tag team gold and have reigned over the rest of the division since but they might face their greatest foes yet in the form of Luke Gallows and Karl Anderson aka The Club. Since splitting up from their partner AJ Styles [who went to SD], the pair have developed their own characters and have stpped away from the faceless and personality-less big guys. In their rivalry with the New Day, they have systematically taken out the biggest member, Big E and even taken the time to poke fun and make countless ‘ball jokes’. We can expect an all out brawl between the pairings and maybe a surprise return from Mr E?

Cesaro vs. Sheamus [First Match in a Best of Seven Series]

As the first match in a best-out-of-seven series, this could go one or two ways. Either the two European powerhouses can put on an impressive showing of strength and athleticism, OR this match could be dead-rubber. The two have already faced each other twice in the last three weeks (with Cesaro coming out on top both times) to no real acclaim. Sheamus lost a match to Sami Zayn this last week on Raw, with Cesaro getting involved and handing Zayn the win over the Brogue-kicking Irishman. RAW Commisioner Mick Foley seemed to have had enough of their constant interfering so arranged this best of seven matches.

While many would hope (including me!) that Sasha would win the belt at this year’s Wrestlemania, it seemed like her time was imminently approaching and that she would have to go through Charlotte to win the ultimate prize. The dynamics of this long-awaited showdown shifted when Banks dethroned Charlotte in July, becoming just the second wrestler to hold the current version of the Women’s Championship. Banks is no longer on the hunt; she’s the hunted. But without Dana Brooke and her Hall of Fame father by her side, will Charlotte fail once again? While her title win on RAW was impressive, Banks needs to show she can remain calm on the big stage and retain her newly won Women’s Championship and stay on top. Banks and Charlotte have flourished as opponents in the past, whether at NXT or on the WWE stage. Unless WWE decides to cut down their ring time, this latest collision promises to be another good one.

Following his suspension for violating the WWE Wellness Policy last month, Reigns lost to Dean Ambrose and failed to bring the WWE Championship over to RAW, leaving the Lunatic Fringe to feud with Dolph Ziggler. It’s evident that the corporates need to rebuild some of Reigns’ prestige and have done so by putting him in a surprising, but lucrative match with the Bulgarian Brute, Rusev. After accepting Rusev’s open challenge a few weeks ago, the two have been cutting impressive promos that resulted in a warm-up match this last week on RAW, which Roman won. Expect this match to lead to destruction and potentially a DQ result!

Their initial meeting at Money In The Bank this year was great, but we know they can put on something even better. Since then, the draft split up The Club, leaving Styles to fend for himself.Cena and The Phenomenal One’s issues are far from over, though. AJ as a heel who enjoys “beating up John Cenaaaaa!” has been so fun to watch unfold. The story continues to revolve around Styles looking to push Cena out of the way en route to taking over WWE. The new guard seeks to down the old guard. Whether Styles is successful or not, this promises to be spectacular. One would be hard-pressed to find two men on the current roster who can deliver in big matches better than Cena and Styles. Whatever happens, we can expect there to be a blow off stipulation match at the first Smackdown-exclusive PPV, Backlash.

We’re still pretty shocked at the fact that Dolph Ziggler’s the one who managed to become the #1 contender to Ambrose’s WWE World Championship. Just a few months back, Ziggler was eating pins on the regular from guys who’re lower on the card than him [he even took a pinfall from Heath Slater!]. to be honest, himself and Ambrose have traded some excellent promos against each other that have made this feud worth getting invested in. Ziggler has been the honest he has ever seemed to be and his rants and frustrations at management seem feel. Ambrose’s run as the top champ on SmackDown still feels fresh and not exactly worn in quite yet. This could go either way, but whether or not Ziggler gets his hands on the big belt, you can always expect a well fought fight and both men will come out looking good and bringing prestige to the SD heavyweight division.

Two of the WWE’s most beloved superstars go head-to-head for the newly created WWE Universal Championship in what will be Finn Balor’s first Pay Per View offering since joining the main RAW roster in the Draft in July. Since coming up from NXT, after losing his title to Samoa Joe, Finn made his debut and won two matches in one night to become the #1 Contender to face Rollins at Summerslam for the belt. It might just be too early for Finn to pick up a win here, but I’d sure love to see it. Rollins has been great since he returned, but Finn has enough to breathe new life into the RAW brand just as Ambrose has into Smackdown. After cutting a promo on RAW last week revolving around Finn’s alter ego, the Demon King, we can expect to see Balor covered in body paint, rearing to rip the head off of Rollins. These two will be in the title picture for a good while after this match, but I’m hoping that it’ll go down as a classic.

This match was announced some time ago as Orton’s big return to Pay Per View action after a long injury lay-off and as a previously unseen match-up, this bout between the Viper and the Beast is surely enough to wet any wrestling fan’s appetite. The two superstars debuted at the same time in 2002, so this match has been 14 years in the making between two of the company’s prized assets. In the build up to this match we’ve seen Orton take on a more comical character at times, with the “RKO Outta Nowhere Line!” being used more than the German Suplex in any given Brock Lesnar match. Having both put the smackdown on Heath Slater in the last two weeks, both superstars have paved the way for a great match, igniting a rivalry from nothing.