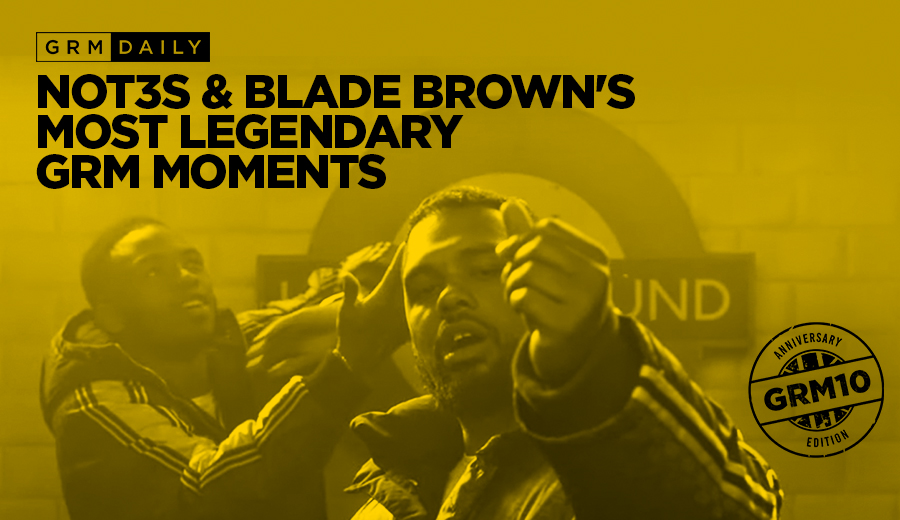 To celebrate 10 years of GRM Daily, we’re currently gearing up for the release of our GRM10 album to celebrate the anniversary. GRM10 will feature a number of the scene’s biggest artists who’ve been with us during the journey such as the likes of Blade Brown and Not3s who kicked things off last week with our lead single, “Cash Train”.

From music videos to appearing on our exclusive Daily Duppy and Car Check series, both artists have appeared on our channel countless times over the years and we’ve rounded up some of their most iconic GRM moments in the list below.

Blade has a number of big videos attached to his name and one of his most legendary ones comes in the form of the visuals for “Drug Dealer” featuring Tiggs Da Author. Directed by GRM Daily CEO himself, Posty, the visuals show Blade and a young lady enjoying some time away in Los Angeles. In addition to including cameos from big names such as Meek Mill and Floyd Mayweather the “Drug Dealer” visuals are also an iconic moment in GRM’s history for being one of the first videos on our channel to be filmed abroad.

Towards the end of 2016, Not3s unleashed the single which would take take his music career to the next level – “Addison Lee”. Since its release, the video for the track has racked up nearly 15 million views on YouTube, a testament to the popularity of the song and its contagious energy. The single set the tone for the forthcoming year, as Not3s went on to release “Aladdin”  – his highest viewed video on our channel with 28 million views-  the following year.

Our Daily Duppy series has seen a number of the scene’s coldest spitters deliver the hardest freestyles and among the list of artists which have done so is Blade Brown. In 2012, Blade made his debut Daily Duppy appearance with a hard-hitting freestyle filled with his distinct raw sound and earlier this year, he returned to the series with another instalment of straight-talking lyrics. Blade’s multiple Daily Duppy appearances – seven years apart – are a testament to not only his icon status in the scene but also his longevity and relevance.

The release of “Addison Lee” saw Not3s emerge as a key player in the scene and his consistency following the release of the big single saw him win ‘Best Breakthrough’ at the 2017 Rated Awards. Despite his success, Not3s was evidently shocked to receive the award, expressing his shock during his acceptance speech. That wasn’t the end of Not3s’ Rated Awards success, having received ‘Track of the Year’ for his big collaboration with AJ Tracey “Butterflies” in 2018, as well as performing a medley during the ceremony.

On tracks, Blade Brown details his love for the finer things in life and we got to see more of his lavish living when he took to our Car Check series for the second time in 2013 to hook up his BMW X6. The Car Check series provided fans of the scene with insight into the cars of their favourite rappers and during Blade’s appearance, we get to look around his X6.

As well as being known for his big tracks, Not3s is also known for his charismatic energy and we got to see more of his character during his exclusive GRM interview with fellow Hackney native and Hollywood star, Idris Elba. The interview was centred around Elba’s directorial debut, Yardie, and Not3s asks the multi-talented star all the important questions; ranging from his upbringing in east London to making music. Idris Elba may be the topic of conversation but that doesn’t prevent him from using the opportunity to praise Not3s on his artistry.

During the summer of 2018, Blade sent his fans into a frenzy when he dropped the  visuals for “12 Summers”, serving as the announcement and a preview of his highly-anticipated Bags & Boxes 4 project. Shot in Los Angeles, the visuals provide insight into Blade’s lavish lifestyle as we see the rapper cruising around in various spots in the city. The combination of the authentic track and the clean visuals proved popular with the scene as the video for “12 Summers” is currently Blade’s most viewed video on the GRM channel with over 3.5 million views.

Not3s’ feature on the forthcoming GRM 10 tape won’t be his first appearance on one of our projects as the singer previously teamed up with Fredo for “YRF”, which was included on GRM’s Let’s Work (Vol 1) project. With over 20 million views on YouTube, it’s safe to say the banger between Not3s and Fredo was a hit with fans and is currently our most streamed single on Spotify with over 21 million plays.

As the list above shows, both Not3s and Blade have been a massive part of the GRM journey so it’s only right the two artists come together on the lead single of our GRM 10 album. The project will be released to celebrate the tenth anniversary of GRM Daily and the two artists have played a massive role in the growth of the platform.

With its upbeat vibe and light-hearted feel, “Cash Train” is a feel-good vibe which reflects the celebratory tone of the anniversary and exhibits the talents which have made Blade Brown and Not3s prominent artists within the scene.