GRM Exclusive: Is Kilo Jugg The Next To Blow? 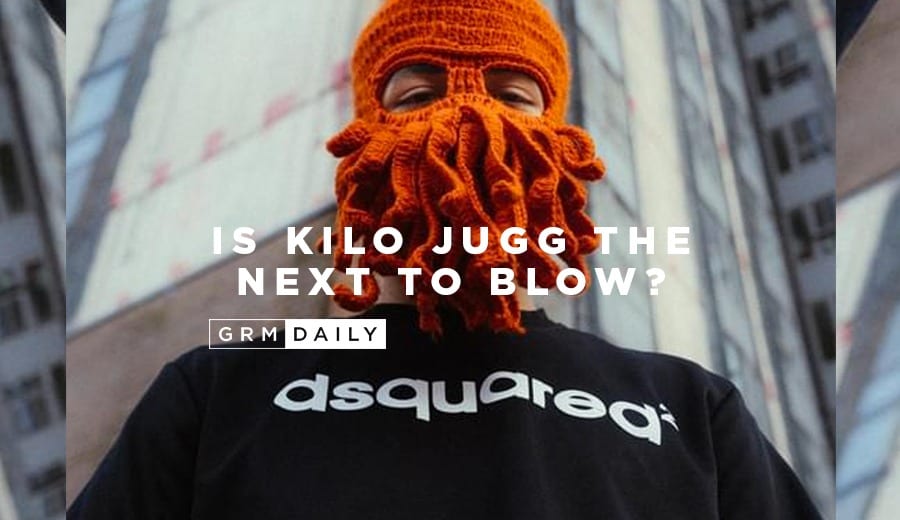 Hailing from Swiss Cottage in North West London, Kilo Jugg has emerged as a musical juggernaut within the UK rap scene. Over the last two years he has established himself as one of the most versatile figures in UK rap, his ability to effortlessly switch between trap wave and drill has made him someone to keep a very close eye on. Whilst many artists attempt to branch out to different genres, Jugg has become extremely technically proficient at both drill and trap wave respectively, and thus occupies an intriguing position within the current UK rap scene as a genuine dual threat.

Kilo Jugg entered the scene with “Lyca”, which served as a promising teaser of what was to come. “Lyca” had little indication of Jugg’s future toyings with autotune and melodies; instead it is a classic trap banger filled with witty wordplay, tight flows and aggressive delivery. “Lyca” is by no means Kilo Jugg’s best song, but what it did serve as is a benchmark for the quality of his future releases.

Jugg went on to release “Paper Chase” and “Take It”, both of which landed music videos on Mixtape Madness, and marked a detour from the straight rapping of “Lyca” to initial experimentations with autotune and a melodic sound. Both tracks displayed what would become his trademark combination of melodic flair, effortless flows, and his unforgettable image with the emergence of the “Davey Jones” persona; Jugg had successfully laid the foundations for a promising career in the UK rap scene.

These stellar initial offerings would be followed by a trio of bangers, namely “Mota”, “Bye” and “2Pack” which would all comfortably clear a million views on Mixtape Madness. “Mota” and “Bye” exist within a similar vein; a sort of infusion of typical American trap sounds with a distinct London flavour. “Bye” particularly had transatlantic appeal, with Kodak Black sharing a clip of his crew dancing to the song and shouting out Kilo Jugg, labelling him, (in their opinion) one of the hardest rappers in the UK. In contrast, “2Pack” is a hard hitting drill song, which has little of the melodic flair of “Bye” and “Mota”, and instead is focused on delivering punchlines and precise flow patterns.

Kilo Jugg has worked hard to ensure that this versatility does not confuse or polarise his own fans into to separate camps of “drill” Kilo Jugg fans and “autotune” Kilo Jugg fans. Artists in the past have limited their own success by attempting to branch out into other lanes and in doing so diluting their image as an artist, but this has not been the case for Jugg.

His consistent use of the character “Davey Jones” from Pirates of the Caribbean, has been instrumental in this. Regardless of the sonics of the track, it is almost a certainty that a reference will be made to this motif. Whether it is the signature “Davey Jones!” adlib, use of lyrical schemes which incorporate Pirates of the Caribbean imagery, or the ever present “Davey Jones” mask in music videos and performances, the identity is constant. In a musical landscape which is dominated by artists who wear masks or balaclavas to protect their identity, a mask can limit an artist’s ability to garner a fanbase, as the fans feel little human connection to the artist.

However, in a similar way to Homerton’s very own V9, Kilo Jugg uses his mask to distinguish himself from other artists, as he becomes not just another rapper with a mask, but the only rapper with a mask with tentacles. Jugg combines this character facet to his identity with lyrics that provide genuine insight into his mindset, with songs such as “Brain” flipping between celebration and pain, demonstrating a stark awareness of the nuances of his life. It seems that Kilo Jugg is aware of the need to present a consistent image to garner a dedicated fanbase, and this bodes well for his continued progression as an artist.

Regardless, whether it’s drill or trap wave, Jugg executes with a precision and quality that demonstrates his undeniable ability at crafting exciting flows with engaging lyrical content. On recent cut “Maxine”, Jugg demonstrates this ability to blend high calibre technical ability, with a more experimental trap wave infused sound, rapping: “I am not bait like Antz, I’m in the T with V and Abdi”, slickly referencing ImJustBait founder Antz and his colleague AbdiTV, whilst melodically gliding over a production who’s delicate keys and short 808’s feel like an experimental take on a Zaytoven style beat from 2013.

Jugg, along with artists such as Yung Fume and Lancey Foux, are using the tool of autotune in increasingly unique ways, pushing the sonical boat of UK wave music, whilst also drawing upon undeniable American trap influences to create an alternative breed of trap wave. Whilst Kilo Jugg’s initial autotune fuelled offerings could be perceived as being not too dissimilar especially to M Huncho, his recent releases of “Maxine”, “One Fork” and “Fed Up” with Yung Fume mark a subtle divergence. Jugg creates a distinct soundscape for which the listener is a visitor for the duration of the song, combining syrupy synthesisers and melodies with experimental use of autotune.

Kilo Jugg and particularly Yung Fume utilise autotune as an artistic tool to experiment with. In a way it is not dissimilar to Travis Scott’s stand out album Rodeo, which gave an artistic spin to the autotune wave of trap music in the US at the time. Autotune is therefore instead used as an instrument, and not as a means to create polished hooks.

Fume and Jugg came together for the deluxe edition of Fume’s 2020 album Now or Never with the track “Fed Up”, which felt like a perfect coming together of two pillars of this new trap wave sound. Both Fume and Jugg deliver, providing enthralling flows, intricate, experimental vocal melodies and memorable one liners. This all comes together to create a song that embodies this alternative trap wave sound that they’re both championing.

Therefore, Kilo Jugg should not be recognised solely for his musical output, but also for the significance that these releases hold in the UK rap scene’s musical landscape; as he is helping develop a sound that is distinct from the mainstream wave scene. This importance, despite his career still being in its infancy was reflected by Adam 22’s decision to give Jugg an interview when he did his trip to the UK last year. Jugg joined a select group of artists including Dizzee Rascal, Unknown T and Aitch to be interviewed by the host of the influential American podcast No Jumper, demonstrating how his music is piquing the interest of tastemakers globally who have no obligation to give him a platform.

Interestingly, Yung Fume was also given an interview by Adam22, which conveys the relevance and intrigue around this alternative wave scene that both Fume and Jugg are championing. Clearly, Kilo Jugg is important not only for his music quality but also his position within the wider UK rap scene as one of the current architects of the alternative UK trap wave sound.

Kilo Jugg’s forays into drill are also impressive, with releases such as “2Pack”, “3Pack” and “Wait” illustrating his competence as a rapper as he effortlessly switches his usual autotune based alternative trap wave to rapping without autotune, whilst calmly delivering punchlines and insightful bars. Carefully selected beats by the likes of Ghosty and Sykes Beats compliment a distinctively laidback delivery for a drill rapper, with Jugg preferring to focus on his vocal clarity so that the full weight of the lyrics can be felt.

“2Pack” was Jugg’s breakout drill hit, currently sitting at 1.3 million views. This track cemented to myself personally the undeniable skill that Jugg holds as a rapper, as Kilo Jugg switched his style completely and proved he can succeed regardless of genre. Jugg peppers a stripped back Sykes Beat production with clever lines such as “I told my apprentice come to the dark side, I feel like Darth Sidious” and almost expressing bemusement at his musical success, rapping “Soon hear Jugg getting played in clubs, thats money from autotune”.

This combination of deft similes and sly predictions for his own success demonstrates the diversity of Jugg’s lyrical content. He appears careful not to mirror the lyrical uniformity of many other drill rappers, who repeat a seemingly endless cycle of talking about their opps, drugs and money without ever really saying anything unique. Instead Jugg offers lyrical content, (particularly regarding his use of rhyme schemes which make reference to his “Davey Jones” character) which no other drill rapper has used; a feat which is becoming increasingly rare in the current scene.

Jugg exhibits his lyrical propensity even further with the follow up to “2Pack”, entitled “3Pack”, in which he confidently raps over an excellent Ghosty beat, dipping into Pirates of the Caribbean imagery and rhyme schemes regularly. Lines such as “Can’t try war with the pirates, rise up cannons and sink man’s ship” illustrate Jugg’s creativity in incorporating his mask as part of his identity as an artist. “3Pack” is accompanied by a top tier video shot by Chauffeur which includes Jugg rummaging through a chest of treasure, paying further homage to the “Davey Jones” persona he has embraced.

Davey Jones aside, Kilo Jugg is a lethal lyricist, on “Wait” he comes through with rhyme schemes such as “Shoot like Myles I’m good with the Cannon, with this wap man’s way too Suave, I’m doing up miles or ten toes trapping”, which plays on the names of different music video directors “Suave” and “Myles” and what it means to “shoot” a “Cannon” illustrate the level of lyricism Jugg is capable of.

So what next for Kilo Jugg? His debut album Destiny: Vol 1 offered a sample of what is to come from the Swiss Cottage artist. Particularly impressive was Jugg’s desire to create an entire concept around the album, utilising Japanese imagery in the music videos and cover art to create a constant setting to imagine the music taking place within. This continuity throughout the album indicates a desire from within Jugg to create a unified body of work, which is more than just a collection of different songs but it’s a cohesive experience to be both looked at and listened to. The songs sound like they belong together, and thus to listen to the whole album from start to finish is a rewarding experience; songs such as “More”, “Intro” and “Baby” are personal highlights, as they combine his vocal melodic intuition with beautifully crafted instrumentals which evoke emotion before a word has even been spoken.

No reference has been made to an upcoming project by Jugg, but one can only hope that he is approaching an upcoming project with a similar conceptual mindset to Destiny: Vol 1. His musical ability is clearly developing rapidly, and his progression as an artist is undeniable; if these two can come together then we could be blessed with one of the most exciting albums to come out of the UK.