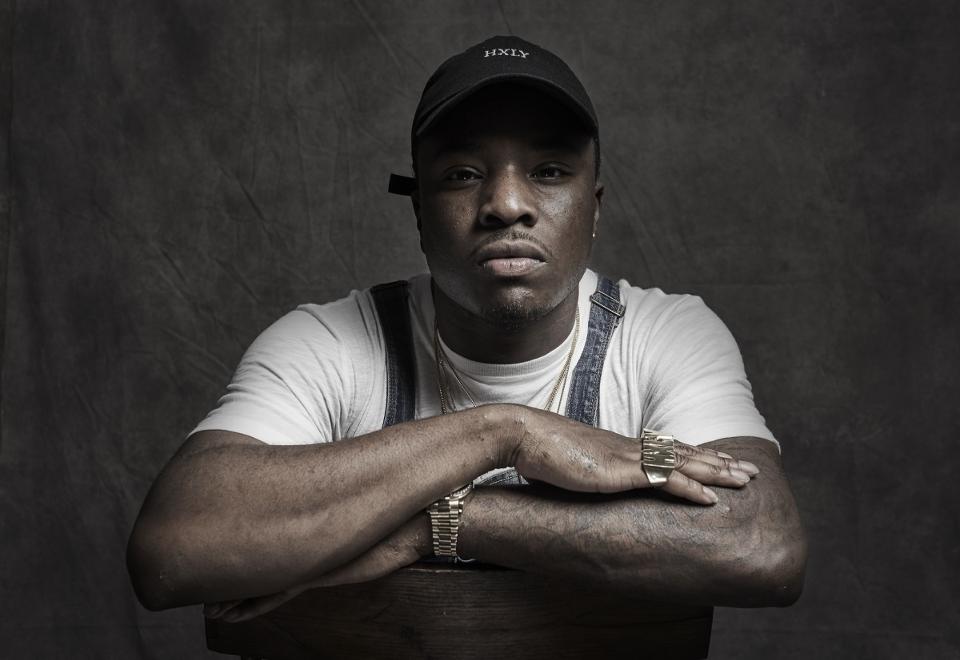 In 2016, the barriers between the UK and US scenes have certainly been bought down. A number of key link ups and shout outs have shown that artists from both continents can thrive on foreign shores and sounds are now regularly shared between both scenes.

One artist who has seen it from both sides is DMV-based rapper Jay IDK. Jay was born in the UK before moving the US at an early age. Now making moves in this US with the release of projects Sex Drugs and Homework, Subtrap and new album, Empty Bank, which was exclusively premiered by Forbes Magazine. Following his visit back to the UK, GRM Daily caught up ith Jay to talk about everything from Kanye and Trump to Skepta and Section Boyz…

The IDK in your name stands for “Ignorantly Delivering Knowledge”. What did that name come about?

“Initially It was really supposed to be just be IDK as it made ore of a statement but people started called me Jay IDK and it caught on so I went with Jay IDK.”

Because of your name, do you feel that your role as a recording artist has allowed to you share knowledge with audiences?

“Yeah, it’s the main reason! I just speak on how I’m feeling and what matters to me. For me, there is no real specific message I’m trying to portray, I just speak the truth. And I hope that when people take the time to listen to my music, they can find elements to relate to.”

So, you moved from the UK to the States at a very young age [2 years old]. In terms of identity, do you consider yourself to be British, American or a mix of both?

“I would say a mixture of both. I think that I couldn’t be one without the other and it’s made me who I am.”

Let’s talk politics and the current situation with Trump set to take over in January. Do you feel it has had an impact on the music industry and what do you think the future holds?

“Nah not really, I haven’t seen any major changes, which is certainly a good thing. I hope everything stays the same.”

Do you feel you have an advantage then other US rap artists who are trying to make waves in the UK and why?

“For sure, there is definitely an advantage. A lot of US rappers looking to break through have never been the UK before but I was raised and lived in Clapham. For me, I have a connection with London and places to reference where others don’t.”

“People don’t understand that fame comes with a price and that price could be your sanity”.

Your latest project, Empty Bank focuses on money and the pressures of getting and securing it. What inspired you to make an album entirely about money? 7

“It’s not that I wanted to make an album about money but it was about what was happening in my life at the time. Money was becoming more of a concern for me as an artist and I started noticing the impact it was having on me and the people around me as well.”

The message you are trying to portray with Empty Bank is not one commonly shared within the larger hip hop community. Do you think that more needs to be done by rappers to teach a younger audience about the influence of money?

“Yes and no. It is important that people make music that means more to them, whatever that may be. Just because I made a project about money, doesn’t mean that everyone should. Honestly, it would be nicer for people to hear more about the power of money but they shouldn’t feel obligated to do so.”

The artwork for the project is also quite striking – how did the idea for it come about and were you happy with the result?

“We were working on the artwork and we had a few original ideas. I just wasn’t feeling them though [one did make it as his Twitter d/p though!]. I wanted something that should shock people when they saw it and make people want to listen to it. I thought about every last detail, from my outfit to the car to everything and I had about a week to set it up and sort it all out. I’m still a bit disappointed because it didn’t live up to my head, but that’s just because I had a perfect thing in my head which couldn’t be matched. But when I’ve showed it to other people, they love it and tell me that it speaks volumes to them.”

One of the biggest bits of news coming from the rap world this week as the apparent hospitalisation of Kanye West following a series of controversial events. What’s your opinion on the situation?

“You know what, I get it man, that stuff is real. There is a lot of pressure in our industry and it can be hard to conduct yourself like a normal person. When you are a creative and you have all these thoughts in your mind, after a while it can get too much. I’ve been there before and it’s just the beginning for my career so for [someone of Kanye’s status], it must be really difficult. People don’t understand that fame comes with a price and that price could be your sanity.”

Do you think that extreme pressure is part and parcel of the scene? And how do you deal with it?

“Pressure is something to be expected. But overcoming can be one of the best things. But it’s a cycle and you’ve got to learn to deal with it every time it comes around because its gonna come around! In terms of dealing with it, I like to beat myself up as much as possible until I can’t take it anymore – it’s like I’m immunising myself to it all. For example, when someone joins my crew, we have to teach people to develop a tough skin. So we will make jokes on them and make them resilient. So, when somethings does go wrong, they can at least feel prepared and have that extra layer. “

“Poverty in the UK doesn’t have a colour”

From his recently released album, the video for lead track “Mentality” captures the remarkable exchange between American hip-hop culture and grime that has been growing in recent years by pairing a trap-indebted sound with the scenes of inner-city London. Directed by Jay IDK and filmed guerilla-style by Eats Media, capturing the natural background in the city’s Hackney and Edmonton neighborhoods, as well as around Big Ben in Central London.

You recently came back to UK shores for a performance at G Star London [alongside Etta Bond & Lola Coca] and shot your latest visuals for “Mentality”. How was it coming back after so long?

“It was great to see everybody in the UK and see how they vibe. Coming back after so long, I got to feel what the culture is like. It also gave me another perspective – poverty in the UK doesn’t have a colour. In the US, poverty is attributed to the black and Hispanic communities and there is a lot of segregation within communities. But in UK, it’s like everyone is in it together. It shows me the parallels between the two and even though we may have it different, it’s all from the gutter.”

The video even features a cameo from OG grime artist Scorcher. How did that cameo come about?

“My brother PW hooked it up. We were chilling and we told Scorcher about what I was doing and wanting to shoot a vid. So, we met up in Tottenham and we got him in the vid. He’s a cool guy though and I’m gonna send him records and hopefully we can work on a track together.”

If you could remix “Mentality” with two US rappers and two UK rappers, who would you have and why?

“I’m feeling the Section Boyz so would get two of them on the track. For the US, I’d have either ASAP Rocky or Ferg and Travis Scott.”

One of the funniest things taking over the TL was your GIF challenge where you asked fans to captain GIFs from the “Mentality” video. How much do your fans mean to you and have you had any crazy experiences?

“The respect and love shown by fans is the most important thig you can get in your career. Without them, you don’t mean anything in this game. A fan of mine said she couldn’t get a ticket to my show in LA and said she would pay $5,000 to see me! That’s crazy. I also know there is a group on Instagram called “We Worship Jay”.”

With your material, and especially your new stuff, you have been getting support from UK platforms like GRM. How much does that mean to you?

“It means a lot to me, for sure. Where I’m from, people don’t go to the UK. For them, LA is a journey. But for my music to translate to audiences outside of the UK and especially where I’m from is important and one of the best things.”

Next year, you’ll be out on the road with Isaiah Rashid and Lance Skiiiwalker doing dates all over America. What’s your favourite part of touring and are there any dates you’re particularly looking forward to?

“The whole tour thing came about because I know TDE [Rashid’s label] listen to and like my stuff and DJ Peter Rosenberg wanted to get us together. So it’s good that it’s finally happening. I’m looking forward to the dates in LA and others on the West Coast. I’ve never been out there and that is where the majority of my fan base are. I like touring because I get an opportunity to meet with all my fans and its fun, chilling with friends. By the end of the process, we almost become like a family.”

Looking at the UK scene, how much do you listen to UK rap and grime and who are some of your favourite artists?

“*After a long pause*….I didn’t want to say it because it’s so obvious but it has to be Skepta. I’m feeling his vibe and I like “It Ain’t Safe”. Honestly, I’m still quite new when listening to UK music but I’m keen to hear new stuff and get to know more artists.”

A lot of UK rappers have been criticised for taking on an American style, whether that be in their raps or sound. Do you believe that’s fair?

“Nah, I don’t think that’s fair at all. I feel like any artist should experiment and see what they feel comfortable with. With music, it’s all about what you’re feeling and working with what you are good at. Creativity shouldn’t be confined.”

With the new year round the corner – what are your plans for 2017?

“Everything! – singles, visuals, projects. We got it all. “