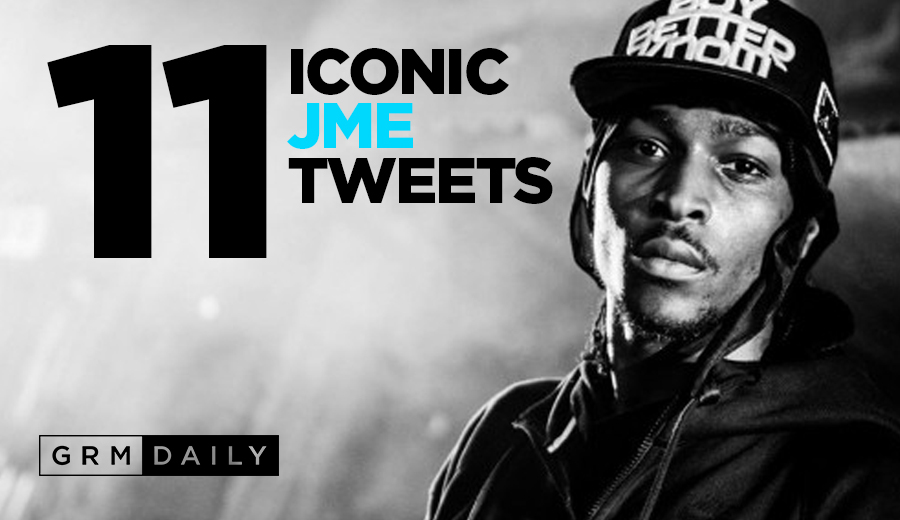 Grime legend and a man not shy of his twitter fingers is THE JME. Following not a single soul on the social media platform, Twitter, the verified blue tick on his profile doesn’t stop him from speaking his mind or responding to agro from trolling ‘eggs’, in between supporting fellow rappers in the game.

Four years since the release of Integrity>, JME finally took to Youtube to release a series of live dates and signings throughout November and December in celebration of his long-awaited new album Grime MC. According to HMV’s Twitter page, where the majority of signings are due to take place across the country, the album is expected to be released on the 29th November.

As fast on the mic as he is on the keyboard, it seems JME’s 2019 new years resolution was to give up tweeting. His last tweet blessed the network on the 31st December 2018 but in honour of his new release, we can’t forget some of the iconic tweets he has produced to the world. JME, this is a call, Twitter needs you back.

1. What is better than a rapper that can crack jokes?

What do you call someone who pays for sex?

2. Not one to shy away from the fact he is a heavy gamer, he shows off in true style.

3. That time JME let the world know he browses the site – obviously iconic.

I browse it, I don’t use it. Like grm daily, I browse the page. I only use Twitter. Don’t question me. I have a Facebook Jme page and I don’t use that either.

Fam. I’m so done. Today I found out that couple man stand up and twerk to wipe their batty

5. Always ahead of the game, Instagram recently started trailing the hidden feature of likes, JME’s call to ‘number free internet’ was last year. But never question him, you will just be reminded of how great he was pre social media.

What? Man was on radio blowing up on heat fm, deja vu, freeze fm etc with a Nokia in my hand with wap. Man blew coz the tunes were hard, before views and stats. And regardless if it helped, it also hindered. Numbers do more bad than good. Mental health is important.

6. When on a date with a man from Ladbroke Grove, don’t say JME didn’t tell you so.

Does the queen wish she was born into a “normal” family so she can just go raving and link man on tinder and get HD brows?

8. When you catch yourself in the mirror on a good day.

Rah, I should be a model.

Bruv, these eCigarettes I see guys smoking nowadays are so tonx. Looks like mans playing a clarinet on the roads.

10. The brain this man has, has now messed with everyone else’s.

Your 1st birthday is your second birthday.

11. The whole world has got it wrong JME, not just iTunes.

iTunes better change my name to Jme as well. Not JME. Man ain’t no fucking acronym.

When the clock strikes 12 for New Years Day 2020, Twitter expects you JME.