GRM Exclusive: We delve into the mind of hot new prospect Kelvyn Colt 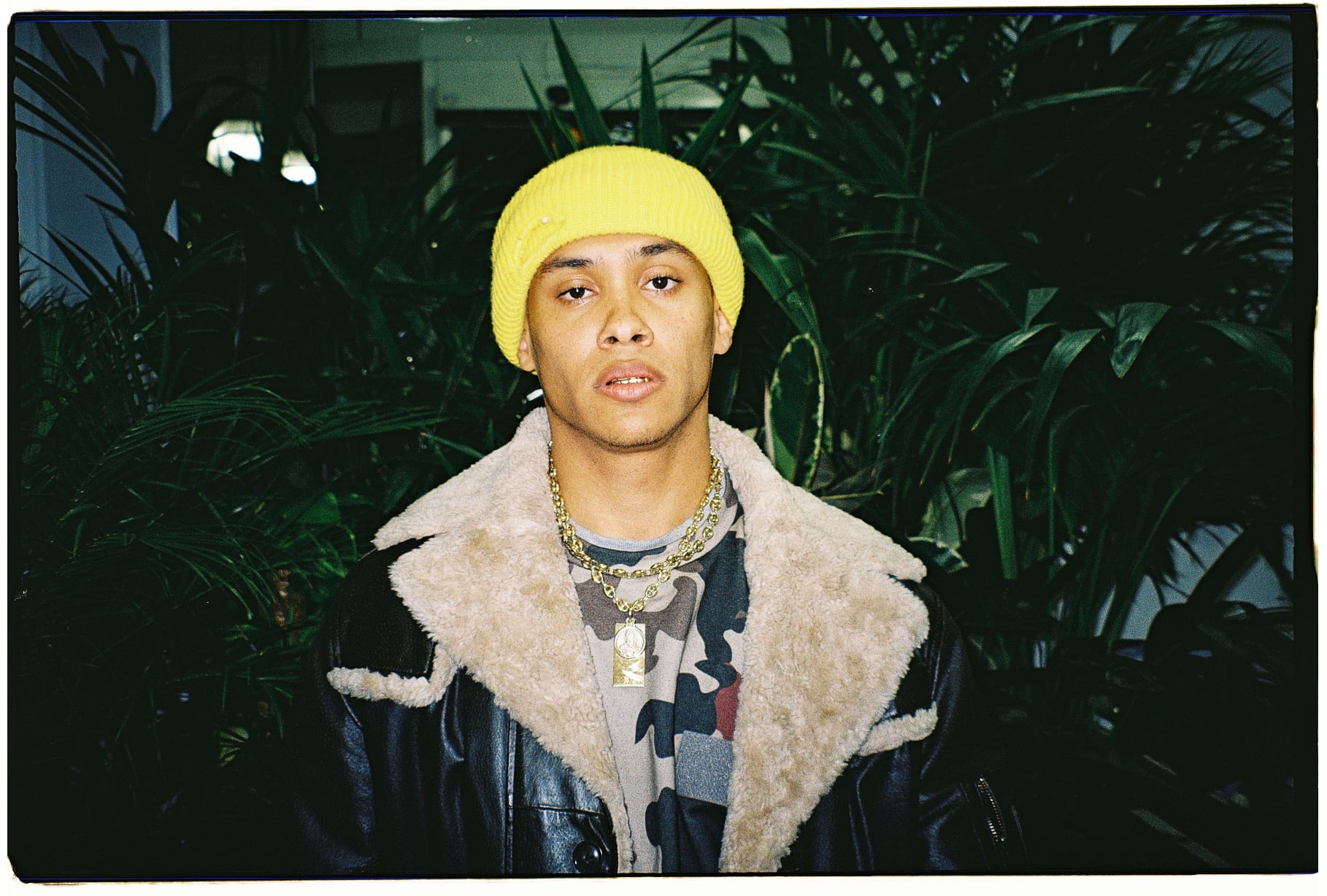 Despite running late to an interview slot that had already been moved once, I stumbled forlornly into Ace Hotel. As any sane man would do, my first move was to locate the bar, which rather unhelpfully turned out to be tucked away towards the back of the foyer. I was brandishing my notebook in the hope of attracting the more punctual members of the journalist community; I quickly reminded myself I was in Shoreditch, and walking around with my notebook out was the equivalent of wearing a ghillie suit in a Vietnamese jungle. After a fruitless attempt to find any potential peers, I soon learned that all other interview slots had been cancelled and I was going to be the only person interviewing Kelvyn Colt this evening.

Thankfully I wasn’t the only one running late, Kelvyn had been caught up in delays to his flight from Prague (he had a show in the Czech capital the previous evening), and had now also fallen victim to the stream of Ubers, Black Cabs and Routemasters that clogged up London streets on a Saturday evening.

Kelvyn knew the drill, it certainly wasn’t his first time in the Big Smoke; although he is a German native, he had previously called the city home when he bought a one way ticket to the capital; when he embarked on a degree course in business studies at the University of Buckingham. Brave, bold decisions like this are something that have defined Kelvyn Colt’s trajectory in music and life thus far.

Just as gifted with his head in the books, as he is in the booth – Kelvyn had previously walked away from a scholarship to study Law at a prestigious German university in order to pursue his dreams of becoming a musician; something which his parents were less than thrilled about. The exit deal struck with his parents would be that he’d get his degree; but then be free to continue his musical exploits, so flight LH914 would be his ticket to freedom.

Kelvyn Colt was met with heavy resistance when trying to shop his music in Germany, labels could not see his fusion of rhymes and melodies as something that would be able to make an impact on the German market. German speaking hip hop has the lion’s share of the market in Germany, with the majority of Kelvyn’s rhymes being in English; it becomes clear why he made that fateful one way ticket purchase.

It does seem that the Germany music industry definitely missed a trick with Kelvyn Colt. Although melodic rap is all the rage at the moment, Colt’s offerings have a socially conscious inflection, as opposed to the celebrated hedonism of his peers – proclamations like “unless we live, love, hate will kill us all” (from his latest single “Love & Hate”); are most definitely a welcome break from the hyperreal proliferation. Along with depth in his lyricism, Kelvyn Colt’s powerful vocals ensure the lyricism won’t fly over people’s heads. Whether it’s singing or rapping, Kelvyn feels at home with either, this multifaceted delivery is what really makes his music, accessible and great to listen to.

Kelvyn’s chariot eventually broke through the London hustle and bustle, and we went straight to Hoi Polloi to fill our stomachs whilst we set the world to rights. With our supposed waning attention spans, and record labels increasingly investing in ephemerality, I wondered had these trends made it harder for an artist who is trying to actually say something with their music.

Kelvyn answered with the aplomb and shrewdness of an astute business man, telling me “before you even create your content, you have to figure out your identity as a creator. How are you going to distribute? How are you going to publish? Probably most importantly how is your audience going to perceive you? If you’re not clear about any of this from day one then you’re setting yourself up to fail”.

In an increasingly oversaturated market it has become even more important that artists themselves understand how they want to position themselves and take their product to market, or they run the risk of being lost in the noise. It’s clear that in Kelvyn’s mind he is not competing with the flash in the pan artists, as he is not willing sacrifice his artistic integrity in order to follow a trend.

Kelvyn is as sharp as they come and is well aware that in this current climate he is taking the less travelled route, but is not fazed by the journey that lies ahead – “As a content creator, you need to decide if you’re going to be a Tekashi who does crazy shit to go viral, or do you wanna be a JPEG Mafia? Someone whose very niche, makes quality music, knows who he’s communicating to and how he’s communicating to them; but it takes a longer time because his shit doesn’t go viral”.

Kelvyn places huge emphasis on quality control, as he intends his music to be a truly immersive audio-visual experience for his audience; as opposed to the Mcdonalds esque dining experience that a lot of these other artists seem to be catering for. Kelvyn’s music is designed for the more discerning listeners amongst us – “Its quality content, out of 100 people who see you or hear you maybe one or two will get the message, but it’s not about the quantity of people who are listening to your music, but the quality of people. If it’s Kanye West or Oprah Winfrey, that is still only one listen, one view.  The music is designed for people who are going to sit and digest the music the way the artist has intended it to be consumed”.

His two EPs LH914 & most recently Mind of Colt Pt 1 are filled with finely crafted music which rewards the listener that is willing to take the time to digest it – a risky stance to take in the increasingly fast moving music business, but it has most certainly been baring fruit. Kelvyn’s Colors Studio freestyles have both scored well over a million hits; with his first- “Hucci” currently sitting at 1.1 Million views, and a more recent performance from his debut EP, “Bury Me alive” coming in at a whopping 4.4 Million.

Kelvyn has even made it onto VEVO’s Artists to watch in 2019 list – alongside our very own Slowthai and Flohio. It’s evident that as long as you make good music, the people will seek it out themselves; you do not always need to pander to the label imposed hegemonies or jump on the latest craze if you want your music to be heard.

Kelvyn’s definitely got a handle on where he wants to take his music and has always adopted the idea that “If I like it then, other kids must like it. It will take time, but the people that like my music will find me, or I’ll find them. I’m planning to be the next Pharrell, the next Kid Cudi, or the next Kanye – the guy who inspires kids to focus on their dreams, and to work hard so hopefully they can make these dreams a reality.”

Unsurprisingly, the UK artists that have found their way into Kelvyn’s rotation all exhibit the same level of quality control that Kelvyn prides himself on – the likes of Casisdead, Nines and Kojey Radical are all in the business of making quality music. Music tastes aside, It is Kelvyn’s tenacious DIY spirit that has taken him this far; something that many from our own scene can certainly relate to.

The grime scene parallels don’t end there, going against the grain has meant that Kelvyn has had to work twice as hard to reap the rewards – he’s got a 15 date Germany tour coming up in 2019, and four UK dates pencilled in for the European leg of his tour; in London, Manchester, Bristol and Brighton respectively. On top of this we’re going to be seeing Kelvyn across various different stages during the summer festival season; and this doesn’t even include the video shoots and single roll outs slated for 2019.

It’s tiring to listen to Kelvyn rattle off the list of things he’s got planned for the year ahead, but it’s also exciting and awe inspiring to witness a young artist like Kelvyn Colt make his dreams a reality against all odds. A soundbite from our conversation that perfectly captures what separates Kelvyn Colt from the rest of the pack is when he told me “If I don’t execute my artistic vision, then I’m not an artist anymore; I’ve then become a service provider”. Here’s to championing more artists and less service providers!