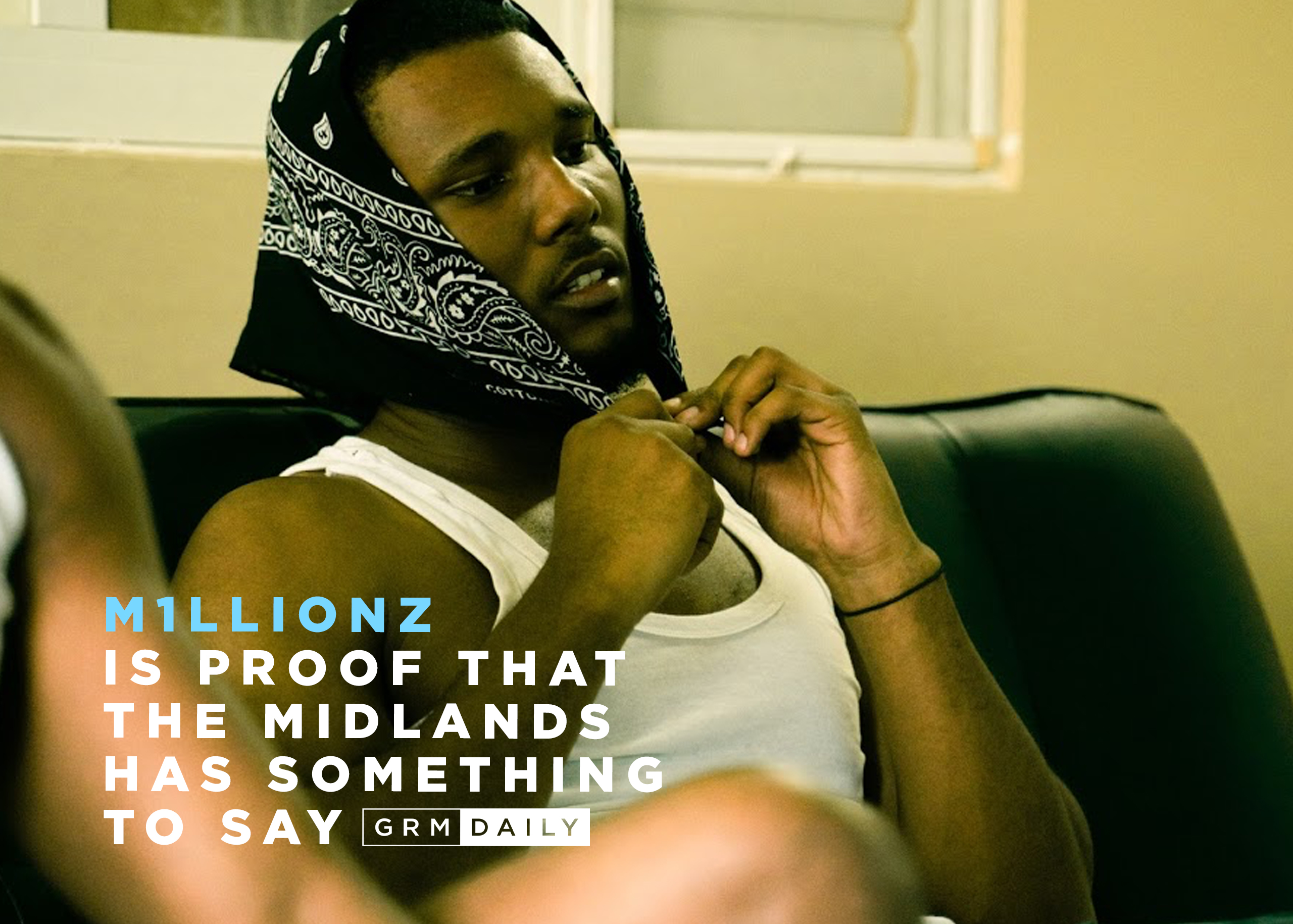 The Source Awards ceremony of 1995 was made infamous by the noise of hip hop’s regional tensions coming to a crescendo. Less boisterous but just as evocative as Suge Knight’s goading of Puff Daddy and the East Coast, was Andre 3000’s prophetic PSA – “the South got something to say.” Relations between regions in UK rap aren’t as adversarial as they were in American hip hop‘s ‘golden era’, but there are certainly parallels to be drawn between the disparity in the levels of talent harboured in the US south/non-London areas, and the inadequate levels of spotlight they’ve been historically afforded. That said, right now there is a growing wave of non-London acts pushing the UK rap scene as a whole to unchartered heights while correcting its geographical imbalance. Flying highest amongst that group is Birmingham representative, M1llionz.

Evidently, M1llionz is not a native musician – on his recent Tiffany Calver freestyle his admission “I be getting writer’s block/[I’m] not a rapper, I’m a trapper with bars” positions him as a gifted prodigy, a label that’s been apparent since his introduction. His first single, 2019’s “North West” saw him mark his entrance to the Drill scene with a splash. A showcase of a style now patented and instantly recognisable as his own, the laidback delivery and vivid descriptions of life as head of the (trap)house had M1llionz stand out in a scene already overcrowded and oversaturated.

Opting for the quality over quantity approach, he didn’t exactly flood the market, but he didn’t have to; each subsequent drop reaffirmed his talents, his bars varying from the most comically mundane and inconvenient occurrences to the constant paranoia of violence and police. With not a single line wasted or used as filler, M1llionz has steadily built a catalogue of singles that exhibit the ins and outs of the life on the roads, in HD clarity that casts no doubt as to the authenticity of lyrics.

The allure of M1llionz extends beyond the stories he tells in his music. Baked into his music is an aesthetic that lays bare his influences. Even if you’d heard “North West” without seeing the song’s name, M1llionz’ distinct and airy Brum-town drawl tells of his regional roots. His midlands accent adds colour to his nonchalant delivery – add into the mix how the Jamaican influence of his heritage encroaches on his content and cadence, and M1llionz has a claim to be one of the recognisable and dynamic figures in drill.

Given his dynamism, it’s unsurprising that he’s attempted to branch out as he has. Expanding his sound from the stock sonics of Drill – dark and guttural – summer 2020 saw him introduce himself to a new audience with “B1llionz”. The track landed him his first top 40 single through its more palatable and accessible sound, for which the sample of amazing Leicester crooner Mahalia’s voice is mostly responsible.

It’s a trend that he’s continued via his feature alongside Unknown T on TSB’s single “Jagged Edge” and with his own single “How Many Times”, on which yet another Midlands talent (Lotto Ash of the Lotto Boys) is called in to deliver a brilliant hook to accompany the verses of M1llionz, which are typically true to life in his imagery and casual in his cadence. Never one to neglect his geographical or musical roots, riddims like “Badnis” and “Bando Spot” prove that when it comes to outright Drill, the Handsworth native has much more to offer.

With the likes of Pa Salieu deservedly receiving much critical acclaim for last year’s Send Them To Coventry project, and Young T and Bugsey of Nottingham establishing themselves as legitimate hitmakers, M1llionz is prime placed to add to the growing pantheon of elite Midlands Rap.

An increased social media presence and a ramped-up output of music from the once elusive artist have built momentum for the release of his debut mixtape Provisional License. All signs point to it being a landmark project for M1llionz and his ends alike.