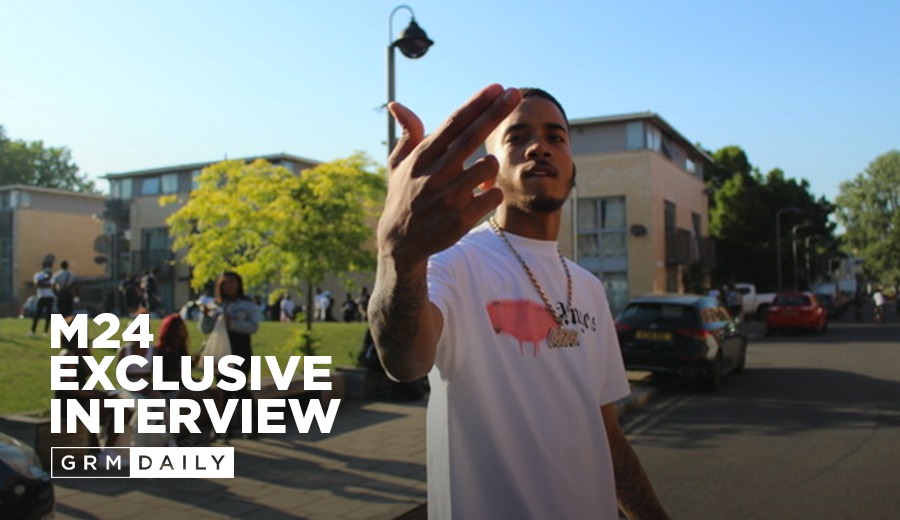 It appears that over recent times, the drill scene has moved to the forefront of Black music in the UK. One hit can send you to the top of the game. As a genre that prides itself on cannoning 808’s and a bassline fresh from the streets of Chicago, if an artist has the lyrical ability – along with sources that validate the content – the world will listen.

One driller that has used the last 12 months in the game to launch himself to the Champions League is Brixton’s M24. As a member of the impressive 150 crew, the buzz has surrounded the bar-slinger since his breakthrough link-up with Stickz on “We Don’t Dance”: A record that beckons the pair to jump in back-to-back fashion over a steady, piano-laced Hargo production.

The record did the rounds across all the major radio stations and appeared to lay down some commercial-standard numbers to launch the Brixtoner to the frontline of drill music.

Now the rapper is dropping his eagerly-anticipated debut mixtape Drip ‘n’ Drill. The tape is one that people  have been calling for. Can M24 keep up the high consistency of heavy-hitting drill records, as well as the wavier styles that we have heard him on with pop-friendly barrer Yungen? Today we will be able to find out.

But the theme of versatility is something that we can come to expect from the tape. “There’s a new M24 coming,” he says. “There’s an M24 that people haven’t heard before. I’m excited to give the contrast of drill, rap, the ‘wave’ as they would say. My pen game has switched up in all different aspects.”

M24 has been locked away as a music recluse lately. The record took him four weeks to put together, and his confidence as a musician has continued to grow, “Yeah, because of the pandemic, we all went to an apartment and worked from home really. There’s a couple of huge features on there as well. With one of them, a lot of people have been asking for it, so I don’t want to give away too much, but there is something huge coming.

“But producer-wise, there’s a lot of talented guys on there that have made this project sick. We’ve got Nyge, Quincy, I’ve got Chris Rich on there as well, he’s a new producer coming up. I’ve got Lekaa, Hargo and Rymez is on a few of them as well. I like meeting up with the producers and making the records too. It’s much more organic, the producer knows what you like, and you know what they like. All the beats are always made from fresh, too.”

The name of M24 seems like a household one now for the culture. The speed of the progression is unavoidable and of course, the transition into becoming a full-time musician is something that has certainly not reached a real level of normality. “Like you said man, it’s been very fast! But it’s been fun as well and I’m definitely enjoying the journey. I just want to go further though.

“So far the transitioning has been very quick for me. Because I kinda had to keep up with myself! At first, it was “Luke Cage”, then I quickly followed that up with “We Don’t Dance”, then I was dropping loads of other things while “We Don’t Dance” was kinda making its way up to its pinnacle. But it’s been good man, it’s definitely been a new experience of life and it has given me completely different views.”

But as the pace of the personal career has continued to blossom, drill music as a whole hasn’t seemed to slow down either. However, with drill’s popularity turning it into the go-to sound for many millennials today, it is thought that grime music deserves thanks in paving the way for other black-cultured genres to burst through the commercial doors. Intrigued, I asked M24 if he thinks this is the case: “Drill music has come a long way. I think it is mostly what I hear now.

“I hear rap and other artists making the afro-wave sounds, but grime music is definitely something that has inspired drill artists to make what they do. But yeah, I think grime music has kinda fallen off now, but everything from grime, we use in drill: the tempo, the content, everything. I think drill music now has kinda become modern-day grime.”

Continuing to dig deeper into the brain of M24, I wanted to know what inspirations he brings to the studio to create a sound that has separated him from the rest. His venomous, rugged tone is one piece of the puzzle, but his infectious UK energy, mixed with sounds that could come from the Bronx take my interest.

“I listen to mainly American stuff really,” he answers with. “I listen to Pop Smoke, American drill, New York drill. But you see Pop Smoke yeah, in terms of influence, the reason is that he expands. He went to UK artists, he went to artists from Colombian backgrounds. You could tell that he wanted to be more than just huge in his country. He never settled – and that’s why he is such an inspiration for me.”

So when asking what the next steps are for the rapper, M24 swore to sticking to the wave and taking the game in his stride. All that M24 knows right now is Drip ‘n’ Drill. Time will tell on how far this driller will go.  “I’ve been evolving. I’ve been evolving behind the scenes without even knowing. I want the people to know that I’m always working, I’m all about longevity.”

But before closing the chat, we had to speak on M24’s killer involvement on our GRM 10 record. His track “Peter Crouch” underpins Quincy’s delicate piano keys, laced by pure greaze. “That was a mad experience, man. An honour in fact. To be involved in a project with the likes of Ghetts, Chip, and D Double E, it’s crazy. GRM has released a few of my songs in the past, so I always love working with the team.”