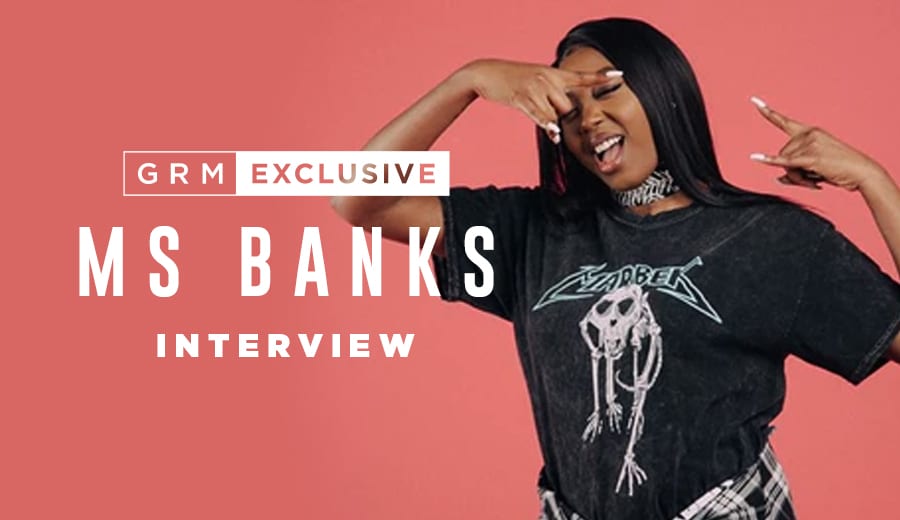 We caught up with Ms Banks just hours ahead of her performance on the VOXI Hot Sauce Tour hosted by Chicken Shop Date CEO, Amelia Dimoldenberg.

Chatting all things from women in the music industry to what items she’d chose to take to a desert island (it would be Gary Zukav & Linda Francis’ Mind of The Soul book, Drake’s Take Care album and a fishing rod by the way), we delved deeper into her career and future plans.

The words on everyone’s lips when it comes to Ms Banks at the moment is her new bestie, Nicki Minaj. We wanted to get all the gossip on what’s happening with her and the tour.   “It’s starting on the 11th of March in London and I’m gonna be there! I don’t know anything else about her set. It’s going to be a surprise to all of us. I should be doing all the UK dates.”

“It’s so crazy because I was really nervous about it, but now cos I’ve got the BRITs coming up beforehand it feels like that’ll be a warm-up. I feel like I’m more nervous about that now. So maybe after I’m done with that, I’ll feel the nerves for the tour.”

Speaking about her performance with Little Mix at the BRITs, Ms Banks commented “So basically, A&R at Sony wanted to include an artist in their performance that they felt would bring a fierce woman empowerment vibe cos that’s what Little Mix is all about. I was suggested and they checked me out and obviously, they were aware that Nicki was a fan and they thought I’d be a good shout! It’ll be a remix. I’ll be doing my own verse instead of Nicki’s verse.

Due to support Nicki Minaj on her tour just week’s after performing at the BRITs, Banks already has a busy couple of months ahead of her. We pressed to find out if she’s got any other big plans up her sleeve.

“You’re the first person I’m telling this too, I’ve got another single coming out real soon. So it’s called “Snack”, it’s featuring an artist called Kida Kudz and it will be out on the 28th of Feb. I’ve got a mixtape coming out before the summer as well.”

Making moves in the industry and dropping more music we wanted to find out where we could catch the south London star.   “There are a few places, I can’t say but I’ll be making a few appearances and a few surprise appearances as well. All the remixes you’ve heard me on, I might be joining one of those people, who knows.”

Already released at part of the South West Four festival line-up alongside one of her idols Ms Dynamite, Bank’s spoke about what it’s like to work alongside people she’s always looked up to. “It’s an epic feeling, it’s slightly indescribable. I really thought that when I came into the game that I’d have to run a lot of people down but it didn’t work like that. When people see you coming through, they reach out to you, they support you, they check on you. I’ve had a lot of advice from people I’ve looked up to during my come up, it’s amazing.”

With Ms Bank’s future looking brighter and brighter with each month that passes, we asked her what she wants to achieve now that she’s in the limelight.   “Just the amount of people I touch and inspire, that would be a big deal for me. If I knew that I’d inspired loads of black women to chase their dreams and be confident and to be empowered that would be a big big deal for me. I’d be really proud.”

“When I first started music, it was just a form of expression for myself. I know how music touched me, I want my music to touch other people, make them feel good or cry it out when they need to cry it out. Help them be a boss when they need to be a boss, just to help lives. If I could touch millions of people with my music and inspire other people, then I’ll be happy.”

“I defo want the awards too, you know what I’m saying, but it’s just not all about that. If I had a massive fan base of people that I really connected with that would make me really happy.”

Dropping exclusive information about her next single, a new mixtape, a performance alongside one of the worlds biggest girl-group on the BRITs and a tour with a legendary female rapper, there are huge things to come from Ms Banks in 2019.

You can catch the highlights from Amelia’s Dimoldenberg’s VOXI powered Hot Sauce Tour and Ms Bank’s performance here before leg three of the tour hits London next month. As well at catching Ms Bank’s Chicken Shop Date here on GRM Daily! VOXI is the UK’s first mobile offering dedicated to customers aged 29 and under that gives users endless social media.