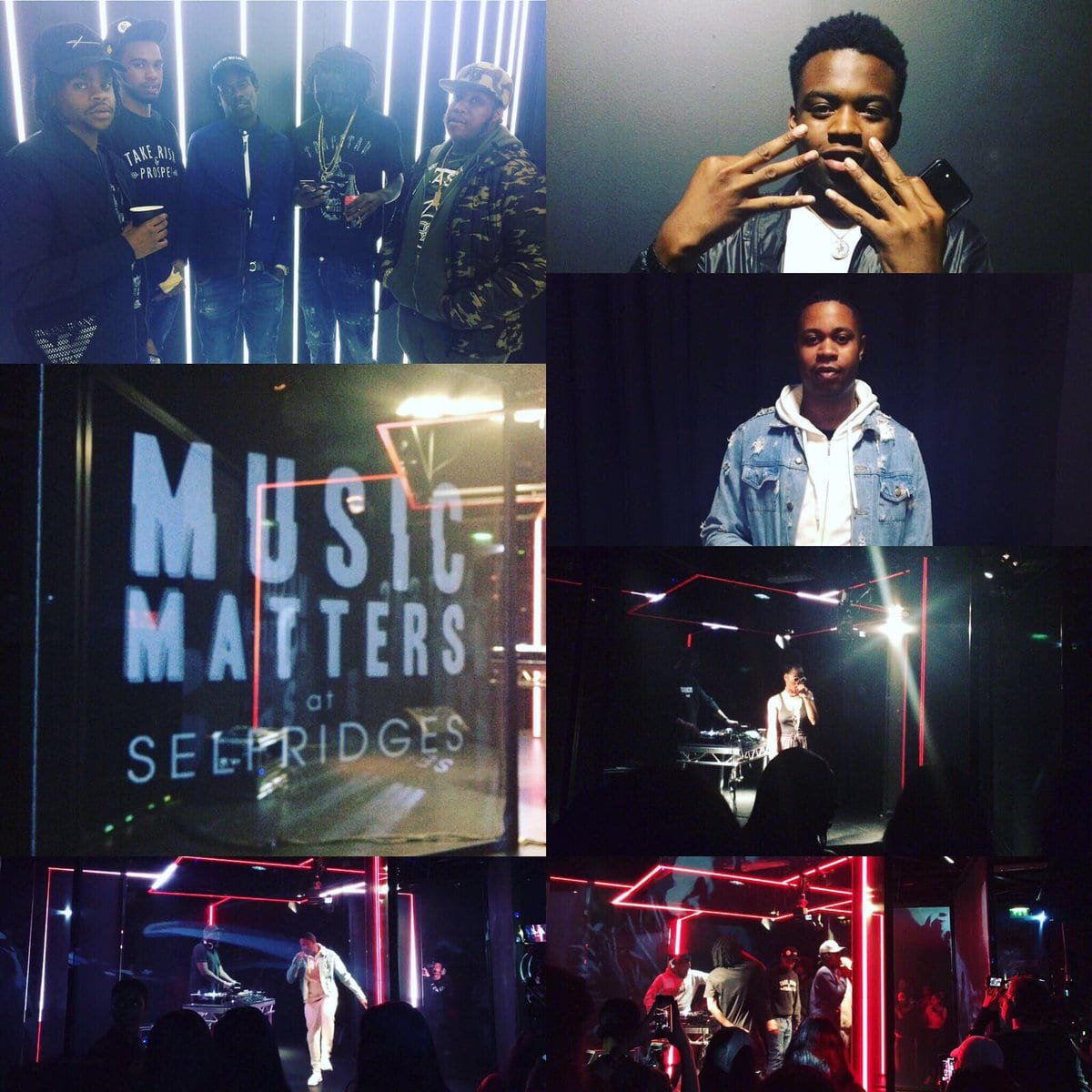 NewGen launched a series of events at Selfridges’ new venue The Ultralounge last night. With this being the first ever in store music venue we weren’t sure what to expect… but it seemed to work, especially for the 67 guys who popped out to buy new shirts set. The department store floor was littered with a mix of shoppers and gig goers and never did I think I’d be walking through dressing gowns and crockery selections on my way to catch Not3s. Hidden away amidst it all were the black doors to The Ultralounge and when inside you’re transported via a trippy light tunnel into a world a long way a way from the brightly lit shop floor.

The first thing that stands out is the space age stage set up bang in the middle of the intimate venue. The square stage surrounded by gauze screens, mirrors and led lighting is a very impressive sight.

So what’s this all in aid of? the Selfridges Music Matters campaign is standing up against live music venues being closed down in cities around the UK and raising money for the Music Venues Trust through these events. We caught up with 67, Not3s and Renz ahead of the gig to chat about what playing live means to them.

67 spoke about how very important it is to be able to perform live as “you see the emotion coming out. It’s not just rapping In a room other people there and you see their reaction and you see your friends reactions on the stage.” Not3s totally agreed and spoke about the reason playing is important to him as “being able to get across what I’ve said in my music because you can’t see me in the studio – me making the tune, you can’t see the emotions that I have on my face or in my body language. When I’m performing the song you see every single bit of it, how happy I am, how sad I am depending on the kind of song I’m performing. You can see every little detail which is what I love. I just love the crowd man, I love energy, I love the crowd being able to sing back what I’ve sung or able to actually love the words that I’m singing and understand the words that I’m singing”. To Renz “performing live is everything because it’s one thing being able to listen to a song – it is really amazing how you can capture something and put it in a song and people can listen to it over and over again but then performing live is an unique experience, you only get to see that once. Even if somebody can replicate that over and over again you’d always remember that night in London or that night in Paris. I think that playing brings the essence of the song out.”

We chatted about their favourite live experiences and what stand out to all acts had different tales with Renz’ being seeing Drake at the O2, 67 were gassed about their gig at the Hammersmith Apollo and hope to bring that energy to show at Brixton Academy and Not3s spoke passionately about being at Avelino’s headline show at XOYO earlier this year saying that ” I like when you can see that someone cares so much about the music. They don’t care about the money, they don’t care about the whole Instagram and social media thing, they care solely about the music and everything else comes after. You can see their passion, with Avelino that’s what I was seeing at his show and that I really really admire.”

People often accredit grime fading away the first time round to the fact that it became almost impossible for acts to play live so we spoke to 67 about how important they think live gigs are for their music and grime culture as a whole. answered that “Without gigs theirs no come ups, a lot of rappers won’t come out their shell. Every time you do a show you grab new fans so without that you won’t gain as many fans as you’re meant to. For the fans they will want to feel the energy that they always listen to in their headphones and see it live.”

After our it was show time and first to the stage was IAMDDB, the combination of her soulful voice and the immersive digital set was to the message of the evening, how powerful live music experiences can be.  Renz followed next, bringing the energy and he treated us to a preview of his next single “” which he dedicated to “the “. Each act did around 15 minutes each so straight up was Not3s who kicked off with ‘Obsessed’ ending with everyone singing along to his huge hit ‘Addison Lee’. And how else to top off yet another dope NewGen party with the 67 boys ensuring it went out on a high.

plenty more events happening at Selfridges’ Ultralounge over the next couple of months so if you fancy checking it out click here for more info: