GRM Exclusive: Music that gives me Life with Swarmz 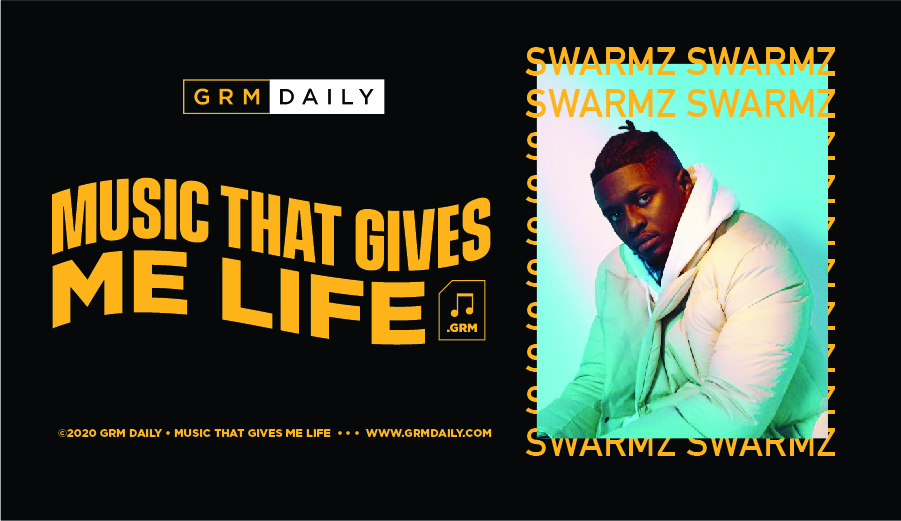 Music that gives me life is a brand new feature with GRM Daily where your favourite figures in the music industry talk us through a selection of songs and musical memories that form the soundtrack to their lives.

To kick things off we have South London rapper Swarmz who came to the country’s attention with the infectiously viral hit “Lyca”. Partnering up with production duo Da Beatfreakz who have a proven track record for hit making, Swarmz followed up the initial breakout song with “Bally” featuring Tion Wayne as well as Da Beatfreakz “Motorola” which also starred Dappy and Deno. Swarmz knows a thing or two about bangers, so here he is to chat about the making of “Pumpy”, working with Cadet, hood anthems and more.

Song that reminds me of my ends:

“I’m from South East London, a town called Eltham. Same place as Stephen Lawrence but not a lot of people know it. This might surprise you but one song that takes me back to the ends is Adele’s “Hometown Glory”. She might be a big pop star, but that one relates to a lot of the mandem. Back in the day a lot of man touched that riddim and did their remix like Sneakbo, Krept and Konan. That ones a big one and when you hear her vocals you get that tingly feeling, everybody can relate.”

My favourite collaboration so far:

“My favourite has to be “Pumpy”; that was me, Da Beatfreakz, AJ, Deno and Cadet. That one’s special because it was so natural, I was in the booth with Beatfreakz when they’d shown me the instrumental and proper felt it then I laid down my chorus. At the time I didn’t know who else they’d put on the track, then I met Cadet for the first time and he’d told me he loved the tune and put down his verse. Then came Deno and AJ then I heard the final song and realised it was a big hit, we knew in our hearts it was the one.

We’ve all succeeded with it, it’s currently silver and nearly gone gold now. I didn’t expect any of that, it all happened so fast. The most special thing is that song bought us all together, then Cadet passed away, God bless him. It’s always going to be remembered and that song will always be in my heart because of the way it happened and everything that happened afterwards.”

Song I’ve currently got on repeat:

“I’ve gotta give it to Darkoo with “Gangsta”, that one’s so catchy. She came from nowhere and rocked the whole scene, so big up to her. First tune went top 40, she’s in her own lane. No one’s doing it like that right now and she’s humble with it. Trust me when I say humble people that work hard always go far in life. You can tell she’s not one of those big headed people.”

“From reactions on the tour, when I do “Bally” the singalong is so mad. Everyone’s jumping and going crazy, girls were even throwing their wigs! That’s the one that had everyone going mad. Even though “Lyca” has more streams and it’s the track that got me out there, the one that put my name in peoples mouths – but there’s something about “Bally”.

That’s the one everyone goes crazy over. There’s always a risk when you put out music ‘cos you wanna give the fans what they want. I had to make sure the song was up to scratch with everything else I’d put out, luckily I’ve got a really strong team around me and they always tell the truth. If a song’s rubbish they’ll be honest and let me know I can’t put that out. I put my trust in the people around me and that was the result.”

Song that gets me hyped up for the stage

“One person that I like a lot is Koffee, there’s no one really like her right now and she’s smashing up the place. That one song “Toast” is a celebration song, it’s all good vibes and that. When you listen it sends something through your body, it’s positivity. Her music gives me so much inspiration ‘cos we’re from the same country and what she’s achieving is huge. I rinsed “Toast” all summer, when you hear that one there’s no negativity and everyone’s happy.”

In case you missed it be sure to check out the wavey visuals for Swarmz’s latest single “Mojo Jojo” right here on GRM Daily, or catch it on DSPs – https://smarturl.it/MojoJojo