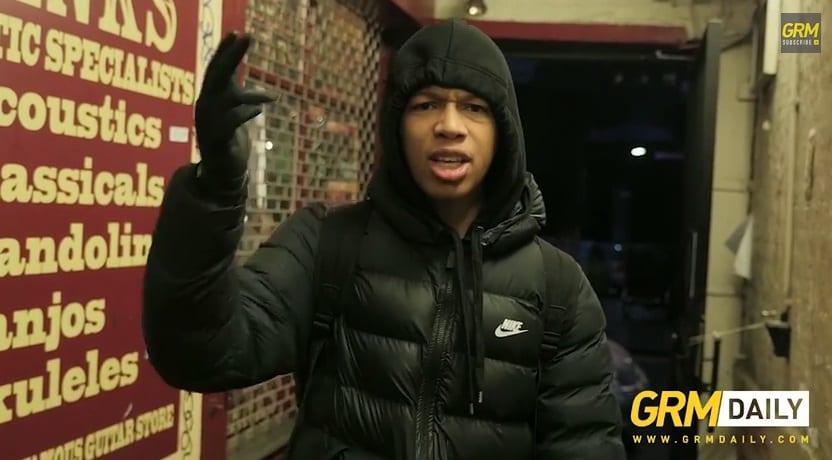 As another week passes, we see a fresh instalment in a new series at GRM Daily called ‘New Wave Wednesdays’, where we focus on upcoming artists.

We are always keen on finding new talent and helping them to progress onto a bigger stage, and this feature is very intent on doing this.

This week, we get the thoughts of Northampton Grime MC, Izzie Gibbs, who has rapidly begun to make a name for himself in not only the Midlands, but throughout the country.

Always willing to clash – featuring on Don’t Flop and WAW – he has also found himself warring Novelist and The Square, with sends flying back and forth.

He has also seen himself snapped up by Dice Recordings, who also manage the likes of Big Narstie.

With this in mind, Jaik Bramley-Fenton chats to the man himself, and gets a little insight into Izzie Gibbs.

J: What ends do you rep?

IG: I rep Northampton which is based in the East Midlands.

J: What/who is your biggest inspiration?

IG: My biggest inspiration is life itself. Also Grime artists such as Dot Rotten, Ghetts, Ice Kid, Big Narstie and The Movement give me motivation – F**K Radio played a big part in me ending up doing Grime as a whole.

J: What’s the one thing you want people to take away from your music?

IG: When people listen to my music, I want them to be able to relate or understand how I’ve lived, as well as how I’m living and how I want to live – especially as I’m coming from a painful/emotional angle. For example, with my ‘Warm Up Sessions’ with SBTV, when people listen to that, I want them to be able to feel and relate to my pain. I want them to almost feel the emotion I had when when I wrote the lyrics, it’s important. I also want people to get hyped when I’m just spazzing out and going in on a riddim, you feel me?

J: What’s your goal for the next five years?

IG: Mainly, I want to put my mum in a house that I’ve bought for her. I also want to make myself and my team successful. Continuing to make good music is key, plus I want to be as big as Skepta and Drake, or around that sort of level, but obviously for the style of music I make.

IG: My dream collberation right now would probably be Tory Lanez. The guy is too sick, the talent is crazy. Just listen to his tunes and you’ll understand that he’s too sick.

J: What did you buy with your first cheque?

IG: The first bit of money I made from music, I actually split it with my mum and saved the rest of it to be honest.

J: What was the first CD/MP3 you bought?

IG: To be honest one of the only CD’s I’ve ever bought was in year 8 and it was a Devlin album – I’m sure its called Bud Sweat and Beers. Also, I buy Lord Of The Mics every year, to be honest. Everything else was on YouTube, I had F**K Radio on repeat.

J: Who are your GOAT (Greatest Of All Time) top 5?

J: Greatest/worst moment of your life?

IG: The greatest would be making my close ones proud of all the positive stuff I’m doing in my life. The worst at this moment in time would be Arsenal beating Man Utd 3-0 after 20 minutes, it pissed me off so much that I went to sleep!

J: Did you watch the Rated Awards? If so, what did you think?

IG: I did watch the Rated Awards and I thought it was sick. It all ran well considering it was the very first one, but I do think there should be more awards/categories. I’m looking to pick one up for the next one, hopefully.

J: How difficult do you find it getting heard coming from Northampton?

IG: To be honest, I’m proud to come from Northampton and to be making a mark on the scene. I’ve now realised that where you’re from doesn’t hold you back from recognition, you just need to work hard for it and have the hunger to succeed in the game.

J: What’s next for you? Have you got anything coming out?

IG: I’ve got a new EP dropping very soon. Also, I’ve got loads of shows and videos coming from me, just wait and see.