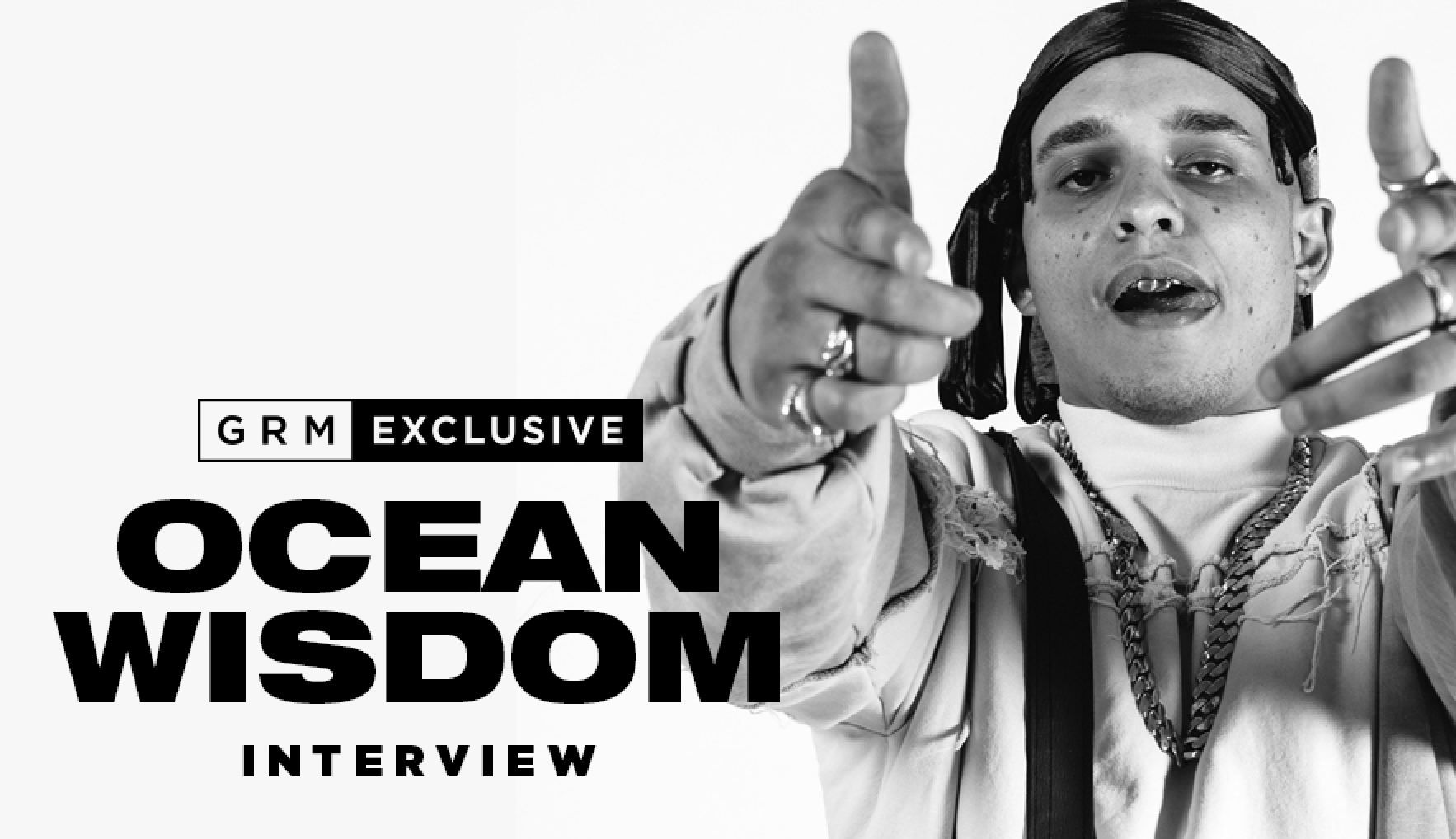 From his breakout tune “Walkin’” five years ago, to his undeniably unique Fire In The Booth and his most recent smash hit “BREATHIN’” featuring P Money, the Brighton-native who goes by the name Ocean Wisdom has created a new wave in the UK scene which has focused on boom-bap US-influenced instrumentals, wavey garms and lightning-fast flows.

Ocean is on the brink of a major leap to ultimate stardom as he drops his first ever project on his new record label entitled, Beyond Measure Records.

With two original mixtapes coming from Wisdom entitled Chaos 93 (2016) and Wizville (2018), they’re crammed with hip-hop influences, with critical features coming from the likes of Method Man and Klashnekoff – the cosigns have been ones which are extremely impressive. Coming next from the rapper is his latest, 27-track mixtape, Big Talk, Vol. 1.

With the project dropping today, it sees Ocean showcase his own sound. After moving from a Hip-Hop based record deal, he’s moved into a more grime-influenced, 808-ridden sound with the new tape coming with features from some of the figure heads in the grime scene such as second collaborations with Dizzee Rascal and P Money, while Ghetts comes in for his first tune with Wisdom. We also see Ocean team team up with Akala.

Although Ocean admits the new tape has around seven boom-bap tracks, he admits that this project is a “true reflection” of himself. The new project also sees Wisdom link up with drill pioneer LD (67) and OG legends such as Freddie Gibbs and Fatboy Slim.

“In terms of the features, it was about getting who was achievable for me to get hold of and who is going to work on this tune. Everyone that I reached out to was available, including Freddie Gibbs, I felt blessed with that one, I reached out and he was there available. But yeah the thought was yeah, who am I messing with really. I wanted to work with people who I listen to, not just people who people expect me to work with. These are all the people who I look up to and who have helped craft my sound.

“There’s always respect there and because there’s expectation there, you have the expectation to perform, right? You respect the artist that you’re working with and you want to make sure you give the best account of yourself. I’m in the studio with these man for a reason and what I bring to the table is unique to me. So, as long as you believe in yourself on that level, then you have nothing to worry about.

“But in the same breath yeah, you know these artists are sick, and if you don’t perform to the best of your ability, then it’s going to be very noticeable because you know they’re going to smash it, so there’s like a mutual pressure. I wouldn’t be working with people that I didn’t think would bring the best out of me”.

The project has everything and more that you could come to expect from Ocean Wisdom, with the project flowing organically and smoothly from start to finish, the versatility in this tape is something that is easily highlighted. It’s more of an Ocean Wisdom playlist. With different flows, topics, instrumentals and vibes it’s not a grooling prospect to take in a full 27-tune project. In fact – it’s just the opposite.

“The workrate has been crazy, it’s not the only thing I’ve been focusing on. I’ve been doing lots of music and that overall has taken around a year, but there’s a lot more songs and a lot more things that people will not have expected.

Big Talk Vol. 1. Begins with a Skit, a man who is represented as Ocean’s fictional music manager. While he pops up in a number of different stages in the project, we come to realise that this man is a money-greedy cocaine addict who is desperate for Ocean to sell out his authentic sound and move into a more pop-influenced, commercial lane.

“We’ve got old-school skits on there, like on the Eminem albums,” Ocean says, “Like you know them Paul Rosenberg Eminem vocals? So we’ve kinda paid homage to that, but I’ve got some wasteman manager, not in real life! Big up Chris in real life, but in the tape we kind of tried to create this manager, who just wants me to sell out and make pop tunes and he’s got a bit of a coke problem. He’s just that stereotypical music manager.”

Ocean says that his voice is his brand, and within the Ocean Wisdom brand, comes the flows. Standing in his own lane, it’s difficult to find other rappers who can tackle the wicked flows and incredibly quick rhyme structure which places him in a world of his own when it comes to the lyrical offerings. His verse on “BLESSED” featuring Dizzee Rascal signifies that. As he continues to speed up the flow as the beat intensifies, the rawness of the rap is something which can be compared to the golden days of the Eminem era.

“Man, 20/30 thousand hours bro, minimum,” when commenting on how long it’s taken him to perfect his craft. “That’s one of the things bro, if you put the time and effort in, and nobody’s fu**ing with you. Like I was looking at this thing on Twitter the other day and some guy said “talent isn’t even a real thing” and he was saying that there is no such evidence of talent, and it’s just about how much time you practice and apply yourself. I don’t know how much I agree with that.

“I’ve always had very good coordination, like I never used to miss a catch, or miss a ball when I was kicking it, and I’d never fall out of beat and I’d know exactly how much time I would have before a drop. A lot of these things feel like second nature, but then with some people it doesn’t come as second nature. But timing is never something I’ve had to work on.

“But when it comes to crafting lyrics, and trying to get clarity and flow, I can’t just do that with any selection of words. You have to be aware of the mechanics of the mouth and how different words make different sounds. You need to make sure you choose the correct words, with the correct syllable patterns and make sure it makes sense and sounds cool or whatever. And it has to work as a song as well. There’s a lot of parameters, but if you can work within them parameters, that’s when you’re sick and it takes a long, long time to make sure that you are comfortable within those.”

The next move to come from Ocean Wisdom is touring the project. With his previous tours smashing more ticket sales than what he could ever have hoped for, the upcoming 21-date tour is one that is due to smash the previous one out of the park, with shows scheduled across the UK and a selection of some European dates.

“I’m gassed for the tour, it’s gonna be mad. But people get it twisted and they think tour life is all fun and games but when you rap like I rap, it’s not the same as when other people rap. If I didn’t rap as quickly and as intense as I do then I could just get turnt up every show, and it wouldn’t really matter because I wouldn’t be putting that much strain on my voice.

“With me yeah, you don’t want to do any damage to your vocal notes and that is irreversible and it changes your voice, and that isn’t good because your voice is your brand. So it’s something you have to take very seriously. When you rap like me or you rap like Ghetts and people like that, it’s a whole different ball game and when you’re doing four or five shows in a row, then a day break then another four or five shows then a couple days break, it’s not so much about being excited for it, it’s about being prepared for it and making sure you give the fans what they’ve paid for.

“My main concern is making sure I give 100% every single show, for every night of the show. Making sure I give the fans what they’ve paid for. Once I’ve done that, I can enjoy myself. The only real time I end up having a party, or getting turnt up is the last show of the tour. Another thing is that half of these man, they just play the tune and hype-man their own tunes, like I find that as a disrespect. So that’s another reason why the voice goes because I perform absolutely everything during my shows.

“But if you ask me if I’m excited, I’m more apprehensive in making sure that the voice is ready and making sure I do the performance justice, which I know I will. I party when I’m not working, you don’t go to work and get turnt up do you? I gotta keep it real with everyone, no smoking on the tour bus, no alcohol in the rider, nothing.”

While coming towards the end of the conversation, Ocean continues, “I’d just want to end it by saying, I’m gonna show these man about work rate and about levels, that’s all I’m gonna say”.

Some tickets are still available for the tour, so make sure you get yours, and be sure to take in the new Ocean Wisdom mixtape, Big Talk Vol. 1. on the streaming platforms below.