GRM Exclusive: How Pa Salieu has become a force to be reckoned with 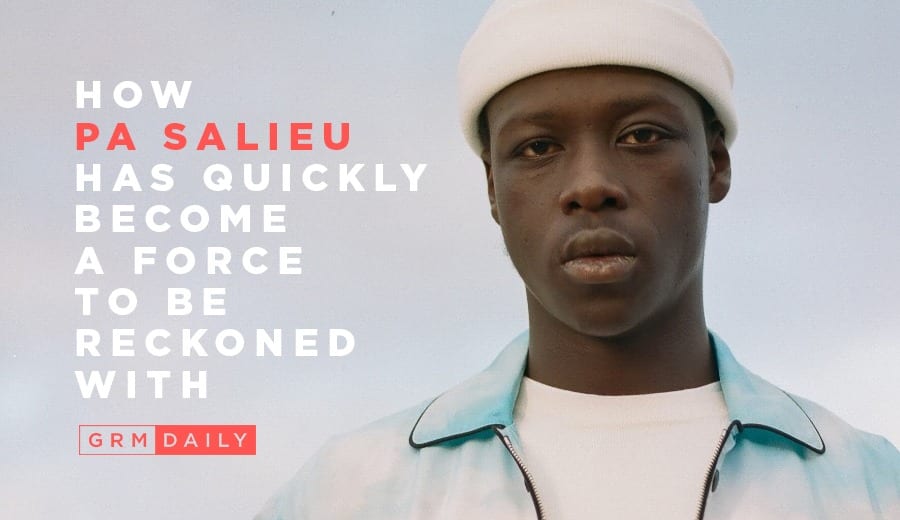 Currently an artist that is making waves and blurring genres, Pa Salieu is one of the hottest upcoming rappers in the UK scene. However, with his explosion onto the scene and impressive catalogue of work so far, including his debut mixtape Send Them To Coventry, it begs the question – What is it that makes Pa Salieu so unique?

Born in Coventry, Pa Salieu was raised in Gambia until the age of 10 when he moved back to Coventry. In an interview with NME earlier this year, Pa Salieu gave some insight into how seeing his auntie making music when he was a kid inspired him. Exposure to music during these formative years was something he said made music so “spiritual” for him.

Speaking to i-D Pa Salieu also said that his Gambian upbringing is “what makes my attitude so different “. Continuing on he also says, “If I didn’t go to Gambia, I probably wouldn’t be doing music. That’s where the culture comes from, where everything comes from.”

Pa Salieu recognises his roots with one of his lyrics saying “Gambian brudda, Mr K Kinte”. The African influences in Pa Salieu’s music are clear with like his feature on Juls’ “Like Tu Danz” where Pa Salieu uses African melodies and an upbeat cadence to deliver a bubbly verse. Other tracks he’s made such as his “Next Up” and “Say So” show the same vibrant almost hypnotic style that Pa Salieu brings to his music.

Pa Salieu’s upbringing in Hillfields, Coventry is something that has shaped him as seen by lyrics in his songs: “They ain’t grow around the block side, still doing mazza inna frontline”. Here, Pa Salieu compares his experiences in Coventry to the frontlines of war. In an interview with i-D, Pa Salieu described Hillfields as the “hood of Coventry. Full of fiends, you just see madness there”.

Pa Salieu himself, as he mentions in his track “Hit the Block”, with another genre-blurring artist SL, has literally faced the violence head on. He says “Frontliner, shot me in the head and I’m still breathin”. This refers to an incident in October last year, when Pa Salieu was shot in the head during a drive-by outside of a pub. After waking up in intensive care and later having surgery, Pa discharged himself from the hospital two days later and was back in the studio after a week.

The most interesting aspect of Pa Salieu and his music, is how he refuses to let himself be labelled or put inside a box. He’s tackled numerous genres such as afrobeats on the aforementioned “Like Tu Danz” alongside Ms Banks and Kida Kudz, dancehall with one of his latest tracks “Betty”, and drill on the track “Year of the Real” where he appeared alongside Manchester’s Meekz, Birmingham’s M1llionz and South London’s Teeway.

Further than that, Pa Salieu’s ability to switch up his own vocal cadence on the same track is part of the reason why he is so interesting and unique. Take his banger “Frontline”, which quickly became a gateway track for the hordes of fans that Pa Salieu now boasts . This track is an eerie banger, that utilises a hard-hitting bassline and drums, Pa Salieu penetrates the beat with his trademark conviction and confident delivery. In addition to this, on the bridge and between both verses, Pa Salieu provides us with some auto-tuned vocals against the backdrop of police sirens, giving us a wistful, yet tense feeling while listening to the song.

The catchy hook causes the song to resonate harder due to its simple yet descriptive nature. The track is hard to label due to the way Pa Salieu is able to effortlessly sit on the beat with his smooth flow while still giving us a gritty delivery on the bleak reality of his upbringing. His fresh and assertive articulation gives off an infectious swagger that makes the track even more certy and allows Pa Salieu’s uniqueness to shine through.

The song “Frontline”, has massed nearly 3 million views on YouTube and over 3.5 million streams on Spotify. With an explosion onto the scene like this, it was only natural that Pa Salieu was going to draw some comparisons, the most obvious being J Hus.

Like Pa Salieu, Hus is also Gambian, and both make use of an upbeat cadence and African melodies in their music. However, by taking a careful listen to both their catalogues you can immediately see the difference between them in both their beat choices and their vocal cadence.

J Hus has a tendency to choose more uplifting, bubblier beats while Pa Salieu’s catalogue is a lot murkier in terms of soundscapes. After Hus saw the comparisons doing the rounds on Twitter, he gave Pa Salieu his blessing by referring to him as his, “Gambian brother”.

Before “Frontline” however, Pa Salieu was starting to gain traction in the UK due to one of his earliest tracks “Dem A Lie”. It was even featured on an episode of Dwayne Johnson’s Ballers TV series. The track is reminiscent of US trap, in the sense that it uses traditional trap elements such as hi-hats and tuned kick drums. The track sounds completely different to “Frontline”, and really showcases Pa Salieu’s versatility with his refusal to stick to one genre.

Pa Salieu, while speaking to Dummy Magazine earlier this year, explained a little bit more about how his sound came to be and how it continues to evolve. “I visualise the video while I’m writing and recording. That’s why I come with this weird flow – I don’t care how I sound to people.” This explains not only Pa Salieu’s unorthodox flow, but his organic method in making music is one of the reasons he’s so unique.

The plethora of features he’s jumped on has helped to establish his versatility and distinctiveness. As mentioned before one of Pa Salieu’s strengths is the ability to body any beat he steps on. His appearance on Juls’ “Like Tu Danz” alongside Ms Banks and Kida Kudz showed that he could switch up his vocal cadence to suit afrobeats, incorporating African melodies and utilising his accent.

Separately his feature on Backroad Gee’s “Party Popper Remix”, a trap/drill hybrid again showcases Pa Salieu’s ability to captivate a listeners on an entirely different soundscape. His Tiffany Calver and Blackbox freestyles further back his credibility as a cold MC.

Overall, Pa Salieu in a small amount of time has already carved out a place for himself in the UK rap scene. His unorthodox flow and unconventional cadence have caused heads to turn and take notice. His feature work is immaculate, displaying versatility and style in abundance .

Pa Salieu shows with his latest release that he can make a solid, innovative body of work that represents who he is as both a person and an artist. The project takes from multitude of different genres as Pa Salieu uses each to create a vibrant and varied body of work.

Take in the project Send Them To Coventry below.