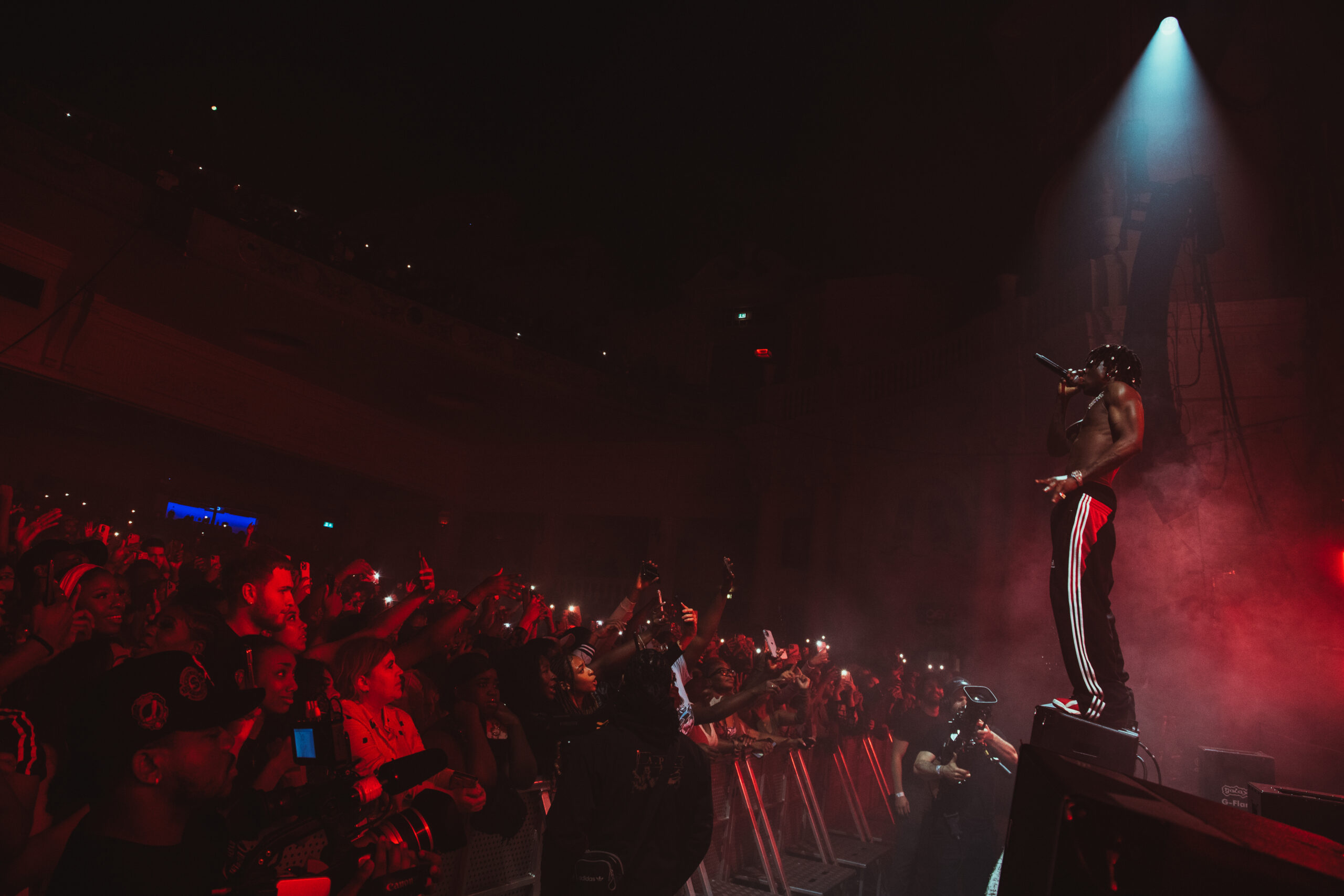 Despite the British weather currently living up to its reputation, the O2 Brixton was anything but cold as global talent Rema graced the stage for two nights.

Boasting an impressive 25Million+ Spotify listenership, the past few years have seen 23yo catapult into stardom. The Afrorave champion has carved out a lane for his now signature sound, earlier this year seeing him release his Rave & Roses album – it looking towards features from 6lack, Chris Brown, AJ Tracey & more.

The venue packed the brim, the atmosphere ahead of Rema’s performance rife as fans geared up for his set. DJ’s keeping the crowd lively the first glimpse of Rema’s props were met with screams of excitements, fans chanting his name. Basking in the thrilling energy, the Nigerian artist kicked off the show with hardhitter “Addicted”. Emerging from a traditional London telephone box, that would later be removed to reveal a one story house structure, framed by a prominent cross. Following it up with a stripped back version of “Hold Me” and racey rendition of “Bounce” which saw him joined on stage by a dancer.

Before moving onto performances of smashes 2020 “Ginger” and “Peace Of Mind”, he took a moment to thank everyone in attendance. Circling back to his most recent LP afterwards, “Divine” never an official single but not shown in the way lyrics were belted back at him. Anyone standing still on the night a rarity, Rema’s stage presence and catalogue enough to invoke a bop from even the newest listener.

The first surprise guest coming in the form of fan favourite Cruel Santino, him performing “Rapid Fire”. The momentum continued as Rema delivered one of his breakout tunes “Soundgasm”, the live band complimenting him perfectly. Succeeding stints of tracks “Bad Boy” and “Time & Affection”, he invited a young lady from the crowd on stage. Also joined on stage by fellow Nigerian superstar Teni as the next surprise guest.

As the headed into its final third, the “Alien” singer, performed the fiercely anticipated classic “Dumebi”. The final guest performance coming from the UK legend, Skepta for a joint showcase of their collaborative JAE5 track “Dimension”. Seemingly ending the show with global charter “Calm Down”, Rema collapsed and began to be carried out on a stretcher. Just as panic began to bubble he remerged for a closer of “Woman” which saw the venue shake.

Testimony to Rema’s quality output and immense ability as a performer, the show did not disappoint. Complicit of interactive elements, creative stage design, guests and more. The young musician delivered a headline that upholds his stature as a now globally known name!