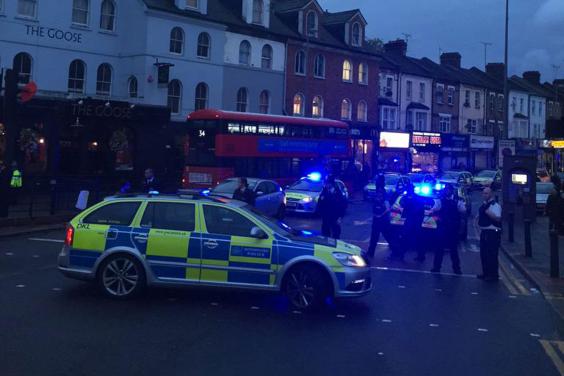 Witnesses saw about 15 men fighting on Hoe Street by Walthamstow Central Underground Station and several other clashes between groups of guys nearby.

It remains unknown if anyone was seriously injured in the fights, but a spokesman for Scotland Yard reported two people had been arrested.

Their statement reads; “Shortly after 5pm today police were called to reports of a large group of youths causing a disturbance in the Hoe Street / Station Approach area of Walthamstow. Officers from Waltham Forest Borough and the Territorial Support group (TSG) attended the scene.

“The group then began to disperse. There are no reports of any persons with injuries at this time.

“Officers currently remain in the area.”

The fight follows reports of a brawl at McDonald’s, also on Hoe Street, last night.

Gavin Rugg, a witness to the riots told The Standard, “I just came out of Walthamstow Central station and they mentioned there had been a police incident. There were some guys wearing hoodies who were facing off with police.

An anonymous witness told The Standard what he saw: “As I came out of the train station, I usually get a bus, however they had closed off the bus station and in the market area nearby there were about 20 police cars and a few riot vans blocking off the pathway, and surrounding it about 150 people who were involved in an incident which looked like a standoff with the police.”

Footage of some of the fights, also involving girls, has been posted on Twitter.

Just got out of the tube at #Walthamstow, and this met me. Guess I’ll try another route? pic.twitter.com/09YBMkN6am