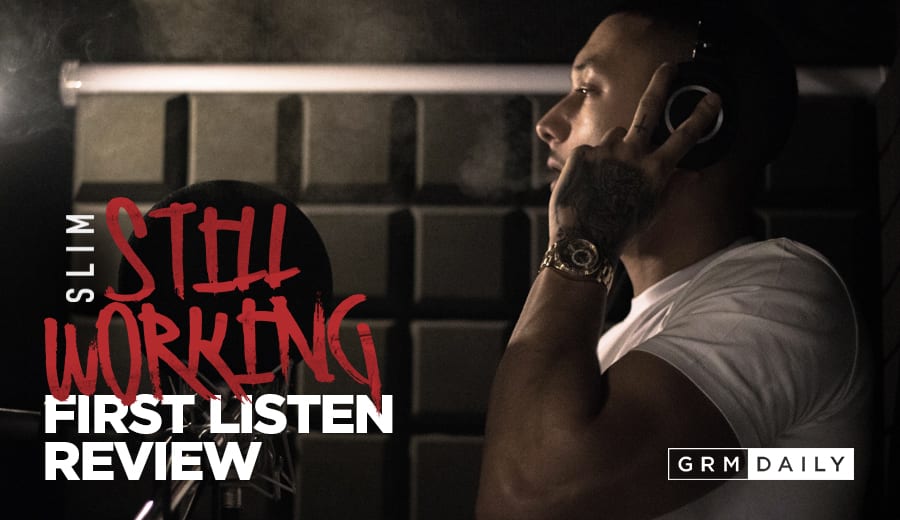 2018 was a significant year for UK rap music where we not only had a host of albums and tracks charting not only in the Top 40, Top 20, and of course at Number 1; but we had a fresh wave of new artists emerging into the scene.

One of those artists was a man hailing from Lewisham, South London. With hard hitting lyrics about tales in the trap and an aura to match, Slim, in a little over a year; has positioned himself as a musician on everyone’s lips.

Still Working, is his first ever project and the anticipation is massive. The track listing looks impressive from first view, with only a few notable features on the tape with M Huncho, Headie One, K Trap and Desparado. What this means is the core of this mixtape will be Slim and Slim only; with no reliance on features to carry the project.

Whilst it is important to fully immerse yourself into a project and allow time to take it in properly, the great thing with a first listen review is being able to take it in its raw form. We can capture immediately what an artist is trying to imprint into our thoughts when we listen to their tracks and then compare that after a few more listens. So chill, have a drink and take in our review as well taking in Slim’s debut project for yourselves. Enjoy.

This song comes in with a xylophone like sound and a flute playing in the background. It all sounds very calm, but you know for sure there is going to be a massive drop. My lord it comes in. The bass booms into the beat, creating a riveting sound. “Life’s never picture perfect, if you want shit done you’ve got to go and earn it.” The first line of the track sets the tone not only for the track but most likely for the entire project itself. This intro is a great start to the tape.

Notable line: “I can sit and cry about sad times on how my Dad died but I’m feeling blessed, and this pack needs a press and my girls got to be at least a ten.”

As the title suggests, this is a reflective track. It’s Slim’s opportunity to detail his come up. One thing Slim is very good at is providing the listener with both sides of the come up; its not all victory talk with him. He keeps it real about his progression from a young boy on the block, to living the lifestyle he now lives. Slim certainly comes with the inspirational street talk on this one, delivered in a way that anybody can relate to.

Whenever a track list is released, I study it to unearth the potential bangers that lay in wait. I look not only at the title but of course at the features. In this case, it was both the title and the feature, M Huncho! As expected, we get the expensive talk on this one, where Huncho’s smooth delivery perfectly complements Slim’s hard hitting approach. Slim has also stepped up and flexed with a switch of flow on this one as well. Solid track.

Notable line: “Don’t ask me what is my angle, I’m too busy whipping up a brick in my sandals.”

Slim already blessed us with the visuals for this banger right here, but honestly, hearing “Pablo” amongst the other tracks I’ve listened to so far, only enhances this song. The previous tracks have detailed Slim’s come up, to the point where he is at the stage in his life where he is feeling like Pablo Escobar.  Shout out to 1st Born on the beat on this one as well, the instrumental gives the track that extra punch.

Notable line: “And me, I feel at home when at the stove, just me and my Pyrex, and when I get nicked the only question is, is how are they going to deal with silence.”

One of the key videos Slim dropped last year that propelled him to the position he is in today. The timing of this track also proved that Slim was here to stay and was taking music seriously. The beat is slightly different to what we were used to hearing of Slim as it’s bouncier, but it certainly does not dilute his approach.

The inclusion of “Balance” and its positioning on the track listing goes on to prove my comment on the last track that Slim is taking us through a story. So far, we’ve had the come up on “Picture This”, Slim enjoying the fruits of his lifestyle with “In the Bag” and his positioning of power on “Pablo”. Now on “Balance”, we’ve got Slim talking about balancing the street lifestyle whilst transitioning into becoming a musician.

Notable line: “Trying to make it happen, the roads and the rapping but in due times somethings got to give.”

Literally two of the coldest trap rappers we have in the UK on a track together. This will either be underwhelming due to the expectation placed upon having Slim and Trappo on a track together, or it’ll be a trap masterclass. Thankfully, it’s the later. We’ve got the flex talk and hard-hitting street tales from the pair, and there is an evident chemistry between the two where they reference each other throughout the track. Banger.

Notable line: “Road to the dough I ain’t pressing brakes, still out here serving bait why you think I still can’t show my face.” (K Trap)

Again, this track demonstrates that whilst this is a mixtape, it’s very much a project that’s had a lot of thought behind it as opposed to just making a few tracks and flinging it out as a loose collection of songs. What I like about this song is I can hear the progression of Slim’s life as many of the street references are in past tense as he details more about the transition he has made into music.

Slim is really proving his ability to rap that hard sh*t on a track packaged to serve to a wider audience. Sign of an artist that is here to stay.

Notable line: “Me now, there is no stopping. I’ve done weeks on the grind seeing no profit and every time I got nicked, every time it was no comment. But now people want me on the mic and I’m seeing notes from it.”

Wait. I think this could be a track for the ladies? The track immediately starts with a string like instrument which naturally gravitates you towards the track and the beat is enhanced by smooth female vocals in the background. This one here is about Slim sharing the life he lives to his girl and she’s got to accept it. We’ve got the crumbs in the Pyrex bowl and money talk on this one, so Slim is keeping it strictly street on this one.

Notable line: “I’m trying to leave the hood, fly out and put my feet in the sand, but probation ain’t feeling my plans.”

Unless you’ve had your head under a rock the past few months, then you have heard this one here already. This lavish trap rap track see’s the pair fully flexing their progression from the hood to Harrods. Touring is also a great play on words where it suggests that they’ll be rapping about their time touring the country together whilst performing from city to city, but its anything but. I’m sure you know exactly what they’re talking about.

Notable line: “Look at the whip I did it with love.” (Has anybody every described whipping up work like that before. The audacity! I love it.)

I know I’m not the only one who, whenever I need to reflect, driving is perhaps the most therapeutic thing to do. Perhaps this is a track written whilst Slim was contemplating the transition he’s made from his previous lifestyle to now being a musician. Whilst he’s sure that his plan with music is going to work, he’s adamant that he’s heading “straight back to cunch if I don’t make it rapping.” This track has Slim describing his desire to take his progression even further whilst still acknowledging how far he has come from the young boy on the block.

Notable line: “I felt stuck on the block but that feeling all changed when I flooded my watch, because I put grams in a bowl and faith in my wrist.”

This one here. This one here is so so cold. The hook is powerful and catchy. How can Slim talk about pissing off his Mum because he kept fuc*ing up the pots! It doesn’t get more trap than that. The legend Desparado brings his A-game to this with his OG flow and cold bars. Slim knew he had to step it up on this one being on a track with Despa and duly delivers.

Notable line: “The feds still trying to visit me because last year I was on a whipping spree and twenty racks don’t fit in my Amiri jeans.”

I’m just going to put it out there. This is my favourite track from the tape. It’s taken me 30 minutes to complete a three-minute song because I keep reloading it whenever I hear the realness, which is basically every single bar. The intro to this has such a huge impact in setting the tone for this track, enhancing the realness of it. “Free S” is an emotional and raw song where Slim sets things straight about the journey he’s embarked on, and where he is going to take himself and his team. I know this is the track that is going to be bumped from block to block, city to city, because people will relate to the emotions Slim is expressing on this.

Notable Line: “Loose lips sink ships, and from four stoves, I can turn two into six bricks that’s big flips, you can call me big Slim, because I ain’t little no more, I done six for 4-0 and 3 for a score.”

I feel like I have been on a journey of Slim’s life on this tape. We’ve seen the up’s and the downs, raw passages of the street life, the transition of becoming a musician and where he wants to take his career.  This Outro wraps up all the above and as with any outro, it leaves you wishing the track was just a little longer!

Notable line: “We don’t gun lean we bring guns through, I give my runner the pack, gimmie the cash and that’s a one – two.”

“Still Working” has entirely met and exceeded my expectations. Whilst this is a mixtape, this very much has the feel of an album to it, and that is down to the quality that has been applied to it. From the production, track listing and of course, the tracks themselves.

I am sure this is a project you can play in many situations, whether on your commute to work, or whether you’re chilling with your mates. Longevity is very much something Slim wishes to achieve through his music and Still Working is certainly a massive step to achieving that. Honestly, I cannot wait for his new tape to drop!