GRM Exclusive: Snoochie Shy Gets Real With New Podcast On 1Xtra ‘Slide Into My Podcast’ 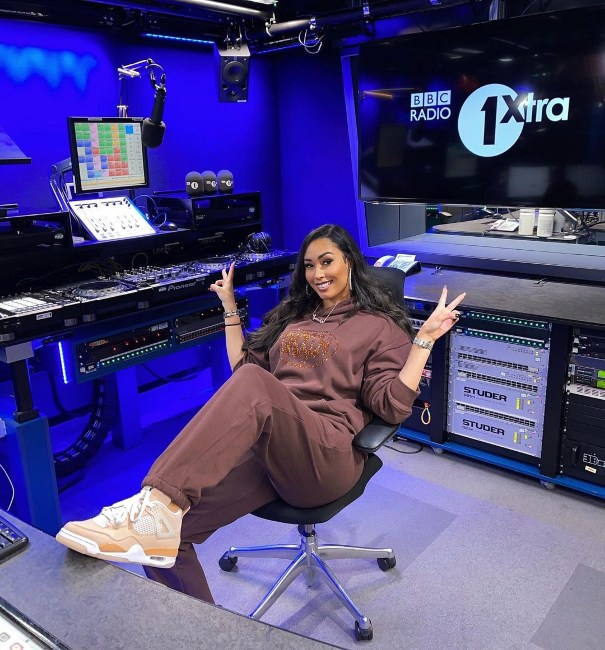 Snoochie Shy has made a name for herself as one of the leading ladies on radio after bagging her very own and notable BBC 1Xtra radio show last year, The Snoochie Shy Show.

With a track-record of numerous creative accomplishments behind her, she’s here to prove she is nothing short of consistent as she announced her first-ever podcast, Slide Into My Podcast, and we caught up with the South London star to talk about her exciting new venture.

To kick things off, Snoochie told us that she was proper gassed to bag her podcast, explaining that she’s “always wanted to do one but never really quite got the right vibe” of what she wanted to go for, but now that she’s ready to go, we wanted to hear from the presenter, herself, about what was on the cards and what we can expect to tune into.

“So basically it’s all about the madness that can go on in the DMs. I get some wild DMs and it’s kind of a running joke now between me and my followers on the ‘gram to screenshot some of the wild ones. They can range from the standard feet pics, and buying dirty creps to straight up ‘Hi, can I eat your ass’ and stuff like that. A man actually DM’d me once saying he’s gonna get his boys to rob all my furniture just so I can sit on his face instead of my chair. I personally find the majority of it banter. Some can be a bit too over the top, and I will block. I express that in the podcast, too. But aside from that, it’s definitely something I wanted to explore ‘cause aside from the craziness, this is even how people begin to date now, so I find it an interesting topic. Plus, I want to chat to people; for instance, if we’re talking about a foot DM, I would love to chat to a person with a foot fetish to speak more in depth about it.”

Snoochie will be joined by two fellow creatives and former Love Island stars, Kaz Crossley and Jordan Hames, to team up and get real with listeners about the madness in the DMs. She explained what made her join forces with the two reality stars, with Snoochie saying:

If the line-up isn’t appealing enough, the trio are set to be joined by a number of guests and familiar faces, but who can we expect to hear? Snoochie kept it low-key with who will actually be on the panel, but revealed that when picking guests, it was important for her to “get people on I wouldn’t usually interview on my 1Xtra show, so no musicians this time round – I would say more so personalities, comedians, actors reality TV etc.”

Of course, we had to ask about her ultimate dream guest, for her unique podcast, which embraces its branding of ‘no topic is off-limits’:

“Jim Carrey – I love that man. He’s one of my inspirations and I’ve always said if I could interview anyone it would be man like Jim and also Juicy J. But for the purpose of this podcast we’ll go for Jim Carrey – he’s a legend mate.”

So, since the podcast is all about getting raw and real with the DMs, we were curious to know whose DMs Snoochie would love to have a scroll through and whose DMs she’d love to slide into and she came through with Madonna for both questions – and it goes without saying she had an A1 explanation for both. Just for some background info for those who don’t know, Madonna was recently living it up in Jamaica to celebrate her 62nd birthday, and Snoochie has, once again, kept it real and said what we were all thinking:

“Currently Madonna’s [DMs] because I saw a wild video of her munching on a leaf like it was callaloo in Jamaica. Also some questionable moves to Spice so I’d wanna see what her DMs are saying right now. At least she had fun though init. [I’d also] ask why out of all the food available in Jamaica did you decide to eat a leaf.”

We already know that fans of Snoochie are going to be eager to see what the hostess with the mostest has to say about all the wild DMs she’s received and anyone who follows her on social media would’ve already been exposed to a sneak-peek of the madness before.

One thing we had to ask was, what is the wildest DM you’ve ever had sent through to you?

“A guy DM’ing me saying ‘can I piss in your asshole please.’ Like bro? Really? But then he came back a day later and said do you know what, sorry for the DM above. Stardog and urine be killing my people.”

As the show description reads: “Snoochie Shy gets 5 figure offers in her DMs for feet pics. We’re not joking. Sometimes guys ask to buy her old trainers so they can lick them clean,” of course we had to ask, what’s your go-to response when you get a mad offer like that? She replied: “I’ll be real, I ain’t actually replied to one yet but for podcast journalistic purposes maybe I will give it a go haha.”

DMs aside, Snoochie has been keeping her humour as her forefront for years, since her radio show at Radar, all the way through to her 1Xtra show, and we’re sure she’ll bring it even more throughout her podcast. The last time we caught up with Snoochie, it was pre-1Xtra, and a year later she’s managed to secure the top spot on BBC Sounds as the show which has the highest proportion of under-35 listeners!

We asked Snoochie what her journey has been like in the past year:

“It has been WILD! We’ve had 191 guests on the show since we started! It’s actually crazy but I LOVE IT! It’s my dream show and BBC really have allowed me to have what I wanted – a no-rules kind of show. We swear, we get drunk and I have no playlist so I select all the music myself. It’s around 95% UK music. I’ve got a great team, but a highlight has definitely been the feature I came up with called ‘Shot or Not’ – the drinking challenge game I do on a Thursday with rappers. Having Trevor Nelson on the show getting mash up was a massive high too. Trevor is a massive inspo for me so to have him on the show wasted was so jokes and pretty surreal for me. But hearing that news was sick regarding the highest proportion of under 35’s. It’s actually mad lit! Makes me feel good! I’m just glad people are enjoying it!”


If Snoochie’s radio shows are anything to go by, her podcast will follow suit with a serious amount of jokes, one-liners and realness, but what is the main difference between The Snoochie Shy Show and Slide Into My Podcast?

“I feel like I’m pretty confident when it comes to talking about music and interviewing musicians because I’ve been doing it for a while now, so this podcast will be a challenge for me cause it’s completely different topics and different guests. But I’m excited and I think it’s gonna be proper fun vibes.”

With Snoochie confirming there will be 12 episodes in season one of the podcast, she explained that she is “really excited to see where it goes”, and we’re adamant it will blissfully join her list of achievements, and keep in tone with her vibrant persona! Slide Into My Podcast’s first episode aired yesterday, on August 21st, so make sure you listen to Snoochie Shy’s podcast Slide into my podcast on BBC Sounds below right now!