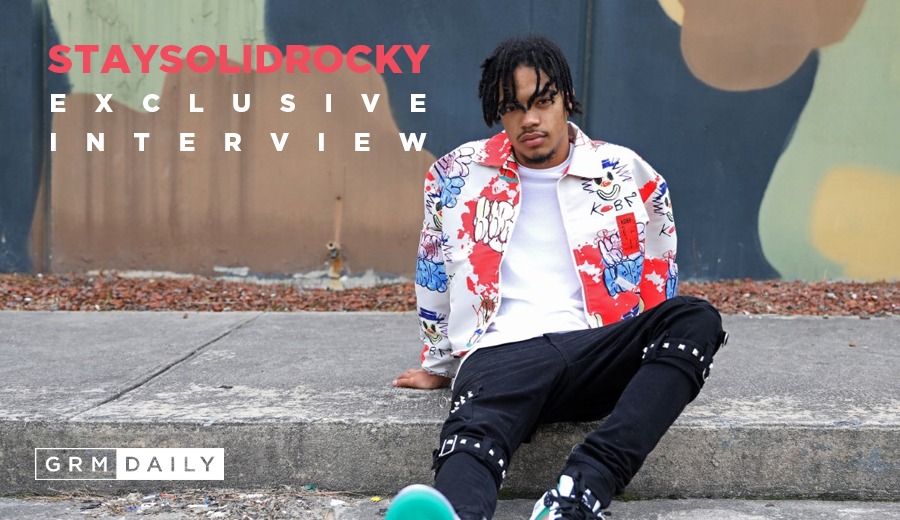 StaySolidRocky has creeped into 2020 with an introduction full of success with his first-ever hit “Party Girl”, and we caught up with him to chat all-things-music as he makes his come-up into the music industry.

The Texas-born, Virginia-based artist has been killing it this year and has already been steady climbing the US Billboard Hot 100 chart, as well as the Official Singles Chart Top 100, in the UK, proving his effortless talent as he has soared past over 10million combined streams.

While speaking to Rocky on his success, we had to ask all types of questions to get to know the man behind the self-funded hit video. First things first, we got familiar with his name; born Darak Figueroa, Rocky is a nickname given by his mother, but he explained there’s a couple of different ways to see it to “take it like a reminder to stay solid”.

Bringing it back to his roots, one thing we wanted to know was who influenced him and which artists he grew up listening to. Naming his musical influence as upcoming artist and collaborator Big4Keezy, he went on to plug their new video together for “Toxic”, which he branded one of his favourite songs and the now-released tune shows a more in-depth look into the star’s lyrical ability. Rocky also told us that he and Big4Keezy had a new track coming out called “Vacant Heart”, which dropped on the 18th of June, and we were told to expect “a lot of creativity” from the young talents.

Growing up, the US rapper explained that he listened to a lot of Bone Thugs-N-Harmony, as well as Lil Wayne, who also happens to be the only artist whose concert he’s attended, while admitting: “I’ve never even performed before,” but we’re sure that’s all set to change in the next year with the rate that he’s coming out with bangers. Rocky, who is only 19 years old, went on to name an array of other artists who he admires and wants to work with, including: “Drake, Kevin Gates, Queen Latifah, Dej Loaf,” he added, “Dej Loaf – she goes crazy. Honestly I’m willing to work with anybody.” We had to of course, ask which late performer he could’ve seen himself connecting with musically, and he responded:

“Soulja Slim – basically someone I wanna get creative with.” When asked what genres of music he wants to experiment with, he added: “Honestly in the music industry, I gotta broaden my horizons, I gotta start listening to country music, rock, all type of stuff so I can incorporate that in my music.”

Still going back to what makes Rocky the artist that he is today, we had to ask two very key questions; the first being, what the first-ever album he bought was. He said:

“The first album I bought? I never bought an album before, but I would say my favourite mixtape of all time would either be Kodak Black Institution or Kevin Gates’ Luca Brasi Story.”

Secondly, the nation needed to know the oh-so important question, 90s R&B or 00s R&B? Being a 00s baby, Rocky held his own and stood by his birth year with excellent reasoning:

StaySolidRocky has witnessed the music scene first-hand across the pond, and we thought it would be key to understand his music by getting familiar with his hometown and how the sound varies from UK music. He said: “Honestly I feel like a lot of Texas is still stuck on, you know, past Texas sounds like when we had DJ Screw, but now there’s a lot of hot Texas artists, but I feel like a lot of people are still hanging on to the old ways. They’re scared to try new things, I guess, but I’m down for anything. I feel like a lot of talent is just slept on,” which led us to wonder what goes on behind the scenes of his music production; what’s the writing process and who do you listen to when you’re not recording? Rocky said:

“The way I relax is honestly like it comes naturally – I just chill and I do what I gotta do, for real. The way I write I just rehearse my songs as I write, so I already know how to say and what to say when it’s time to go. When I’m not recording, I listen to my own music. I don’t know because I mean I never really hit the studio like I wanted to so now that I’m in the studio I now actually have more songs recorded, so I listen to myself.”

So, taking it to present time, we wanted to know how Rocky got into the “Party Girl” mode and what led up to it, with him admitting:

“Honestly the writing process was nothing special, that’s why I didn’t expect it to go as big as it did. That’s why I advise everybody to record every song you write otherwise you don’t know when you’ve got a hit. Honestly, I thought it was gonna be like 50,000 views at the most.”

But fast-forward to now, where he charted at number 19 on the day we spoke, and he revealed what that placing meant to him: “Honestly it means a lot to me, because I’ve always wanted to do music and I feel like this is just the start of me getting the recognition I deserve.” The artist went on to state that this definitely wasn’t just a lucky streak and that his hard work is paying off in all the right ways. He added that although he got into music naturally, that “sometimes I be feeling like it’s the only thing I’m good at, you know, so it must’ve been a sign”.

A huge part of the “Party Girl” success has come from the numerous TikTok videos, where users on the app have danced along to the song, including Kobe and Vanessa Bryant’s daughters Natalia and Bianka, who joined in on the trend. Rocky explained that although he was new to the app, he was thankful for the platform it gave him, as he said: “Honestly I didn’t know what TikTok was at first, I didn’t know what they were doing, I didn’t understand them. But, I mean, it’s a blessing though.”

The success of his first track is only the beginning as Rocky sets to embark on a future filled with likewise achievements, yet outlined right now as his most-cherished triumph so far, saying:

With that in mind, we wanted to get into his mindset and suss out how he sees his journey panning out in the next five years:

With humour and talent on his side, we definitely saw the personality of the rising star that he urged fans to become familiar with, as he added that in future he did see himself touring and “coming up with new ideas”: “Honestly I feel like I did come in the game with a hot song and I’m already on Billboard early on, that’s a lot of people’s goal right there and I already accomplished that for a first music video. And, I mean, now my main goal is to keep it consistent and prove everybody wrong. A lot of people are saying I’m gonna be a one hit wonder, a lot of people are saying this and that, but now is the time to prove everybody wrong and tell them to shut the fuck up.”

StaySolidRocky has been climbing his way from strength to strength and the numbers are already speaking for themselves. But as far as first impressions go, we know a lot of UK fans have a clean slate when it comes to the star, and we wanted to know if there was anything Rocky wanted to put out to future fans, before they embark on learning about his music. He said:

“I mean I’m just a normal person with all type of emotions, all type of vibes and I hope you stay tuned, I hope you like it. [But] don’t judge my music off of “Party Girl”, that’s the easiest song I ever made. There’s way deeper than that. It’s an inaccurate first impression. I feel like even though “Party Girl” is charting, I feel like they’re not giving me the respect as an artist I deserve, they haven’t seen what I can really do yet.”

With the masses of creatives out there who are looking up to new talent as a learning curve for their own musical experiences, we asked Rocky if he had any advice for up-and-coming artists, and his main tip was:

Before we could end the chat, we obviously had to plug Rocky with some fire UK music, after admitting he hadn’t given it much of a listen. He said: “UK? Nah, can you put me on with some? Who’s some hot people in the UK right now, let me know, like rap or some Rockstar something. I’m in my notes right now.”

From the jump we had to get him on to Stormzy, who is doing bits for the UK scene, as well as Dave with his poignant song writing. “Alright bet,” he said, “I’m gonna check them out. That’s what I like, I like lyrics.” His six-figure streaming sales for his other tracks “Soft Aggression” and aforementioned “Toxic”, we’re certain Rocky will be a man of his word and put his aspirations in place to follow suit with his current success. But, for now, go and check out his music on YouTube, Spotify and Apple Music.