GRM Exclusive: Here Are The ‘Top Tier Trainers’ Dropping This May 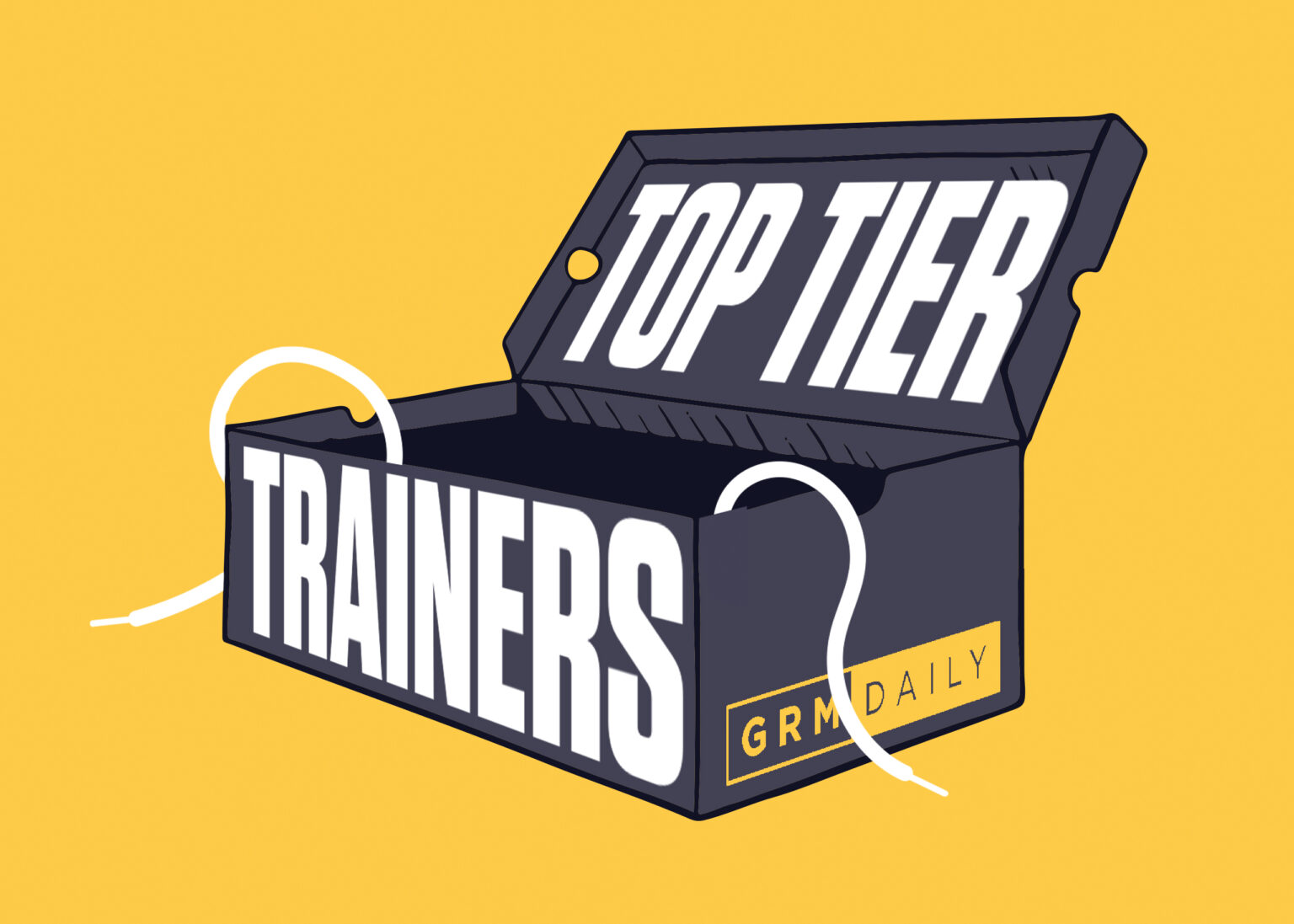 Welcome back to GRM’s Top Tier Trainers, our curated selection of the coldest sneakers dropping this month!

April saw the launch of the Skepta x Nike Tailwind V as well as the return of the Retro Hyper Royal as Brits across the country dusted off their freshest creps to return to pubs and restaurants once more (outdoors, of course). It seems as if those in charge of Nike and Jordan are aware of our need for urgent drippy trainers as each have brought a cold offering to this months Top Tier Trainers.

This month features an array of heavy hitters with all of the traditional titans of the game bringing something different to the table. Highlights include the reincarnation of a classic Joran 7, a brand new ‘magic mushroom’ inspired collaboration, and the restock of an embossed Nike Dunk High dedicated to the LA Lakers. 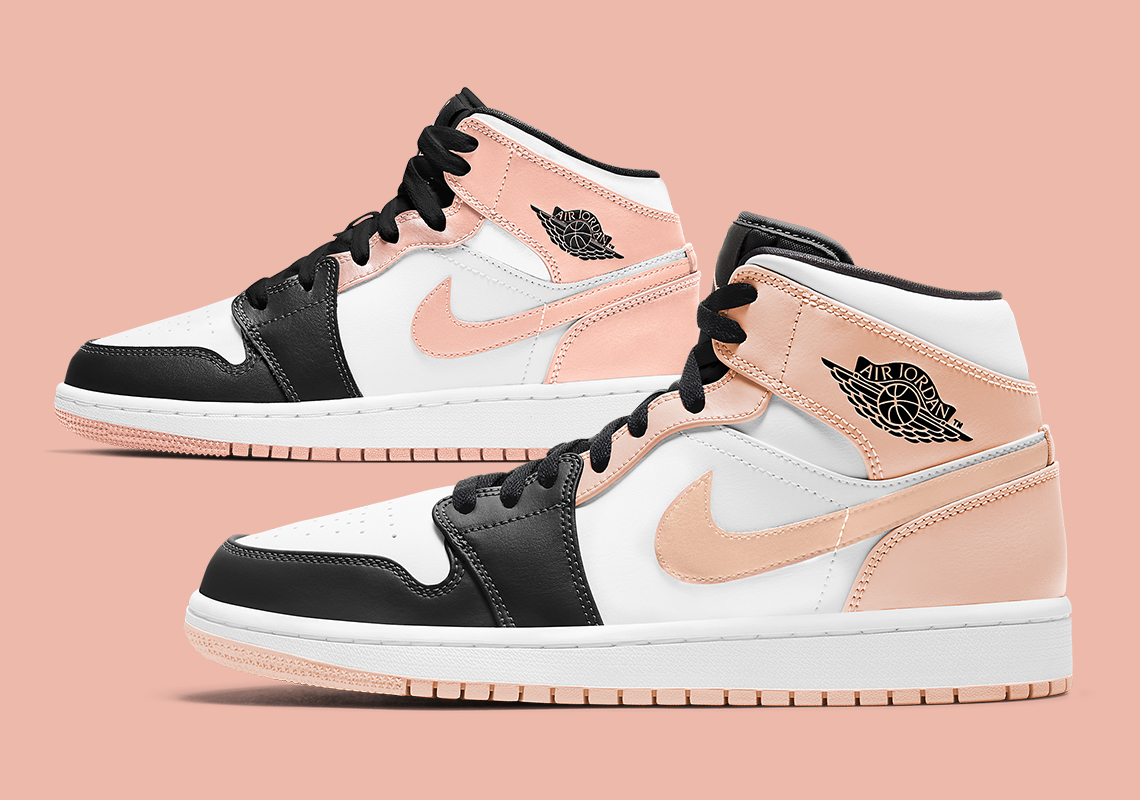 Jordan has always been a master of nostalgia, bringing back classic elements with a contemporary twist in order to pay homage to a past model or iconic period in the brands history. This self-referential design of the ‘Crimson Tint’ is a chip off the original Crimson tint color pallet of the 1985 OG silhouette. However they have had a slight colour update, tweaking the hue of the pink helm and ankle flaps to degree only noticeable to the most adept sneakerhead. Black and white contrasting leathers balance out the design, whilst black laces literally and figuratively tie the whole concept together. 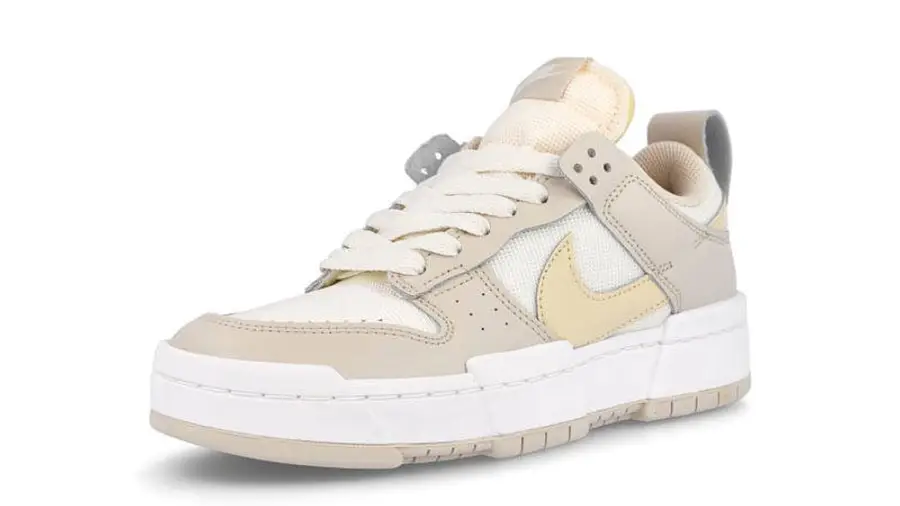 Few of Nike’s sports-turned-leisure shoes have had quite the impact as the Dunk Low. As can be expected, with such infamy comes a plethora of interpretations, spin off’s, and reconstructions. The latest addition to the Dunk Low lineup is a white, pearl and taupe design with a tight woven construction. The texture of the woven panels wrapped in a ‘sail’ leather shell is a refreshing addition to the often repetitive Dunk Low catalogue.

However, what sets this shoe apart is the inclusion of the ‘DISRUPT’ detailing in the form of a stockier and chunkier looking base and upper of the shoe. The combination of the Disrupt construction and the retro foam tongue makes this shoe one of the most unique drops of the month. 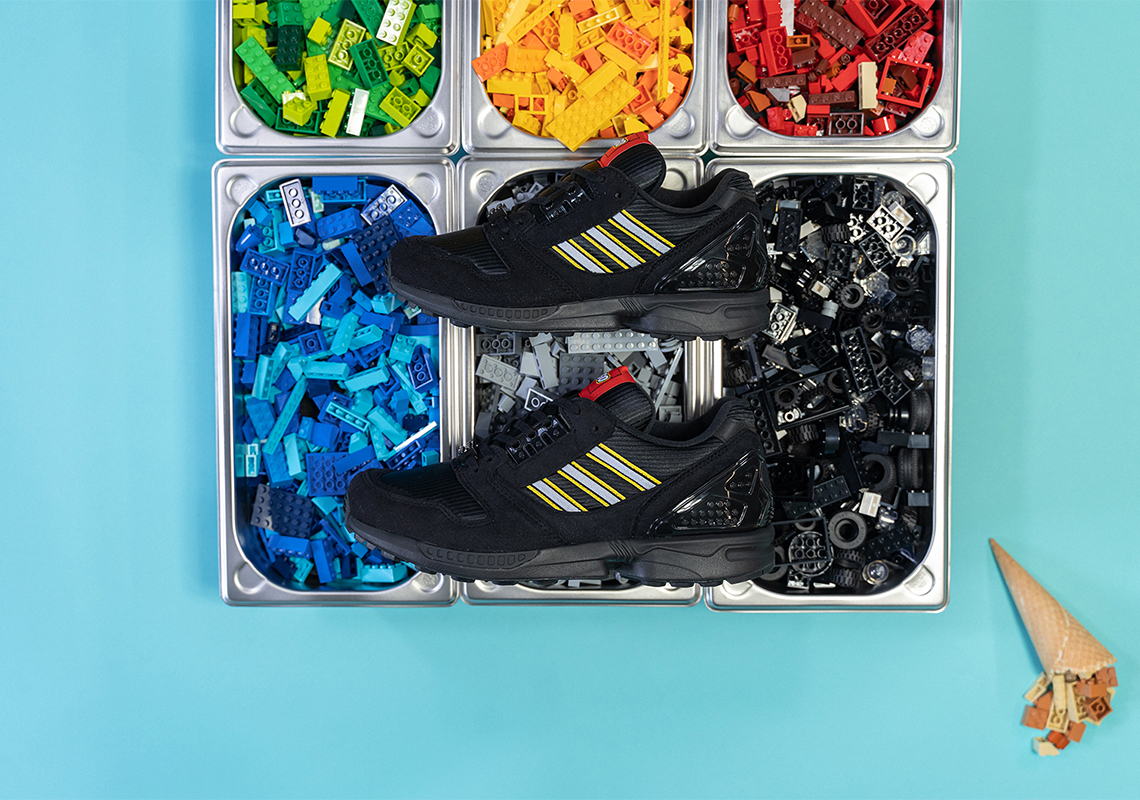 The creative ingenuity of LEGO knows no bounds as the Danish toy manufacturer has returned with six new ‘ultra-customizable’ creps in partnership with Adidas. Once again, LEGO has decided to hijack the classic ZX 8000 silhouette from the Adidas archives and grant them a lively reincarnation.

The ZX 8000 pack consists of six trainers, each representing the six classic brick colors from the original LEGO sets. All along the design features have been customised to reflect staple elements of the LEGO catalogue such as the eyelets and lace dubrae modified to imitate the bumpy surface of a LEGO brick. Additionally, each shoe will come in an original  ‘brick box’ designed to look like a giant oversized LEGO building block. 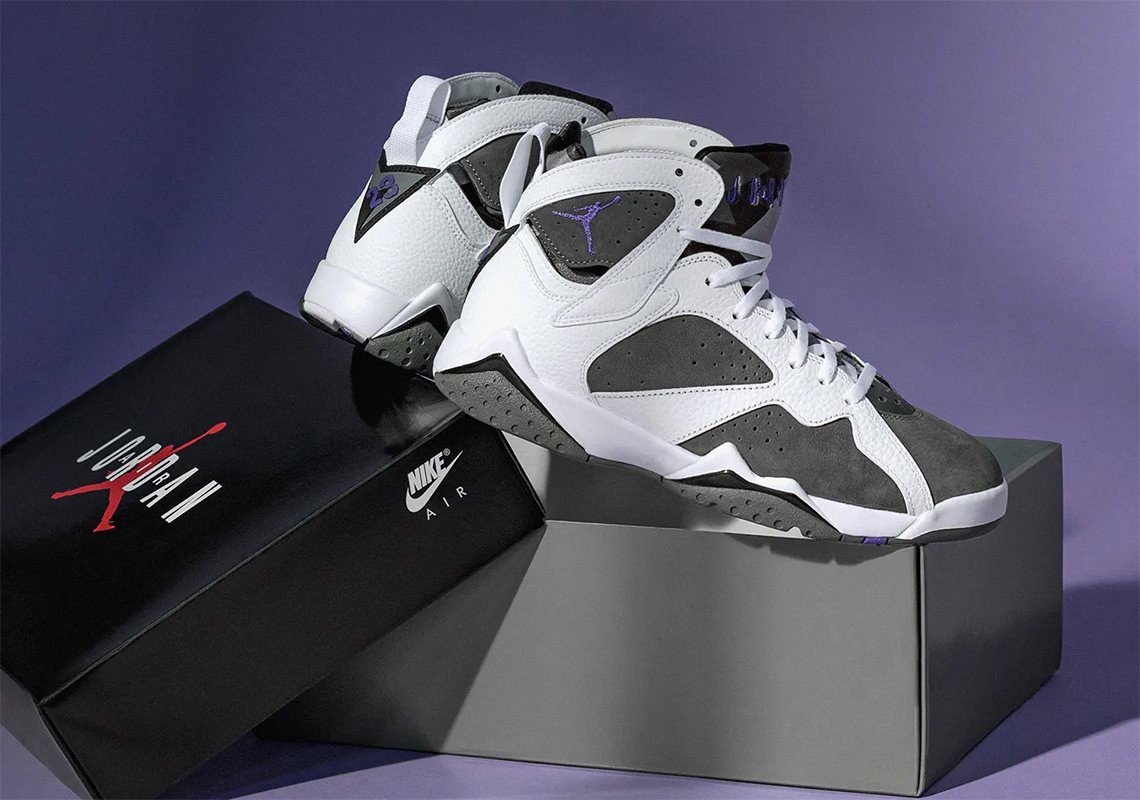 The Jordan 7 has always been synonymous with Jordan’s run for a second consecutive NBA title. As a result, over the years we have seen a myriad of colourways introduced but perhaps none more striking than the atypical arrangement of the ‘Flint’. The grey and purple motif was first introduced during the original launch of the shoe in April of 2006. Now after nearly 15 years this saucy suede rendition of the Jordan 7 is making a return to sneaker collections across the world. The shoe features purple detailing on the Jumpman, ’23’ embroidery on the heel and on the tongue while a crisp white leather borders the grey accenting throughout the shoe. This is a classic retro design that we can’t wait to see back on the streets and on the court.

As far as collaborations between Adidas and A Bathing Ape go, this just might be the best one yet! Coming in a green and white colourway, this collab sees fashion designer and BAPE creator Nigo put the brand’s signature camo design on Adidas’ Superstar model. With one trainer featuring BAPE’s shooting star and an ape head graphic on one tongue and the other branding Adidas’s iconic three stripes and the Originals logo on the other, the two shoes make for an asymmetrical – but clean – pair of creps which will definitely be a hit with sneakerheads. 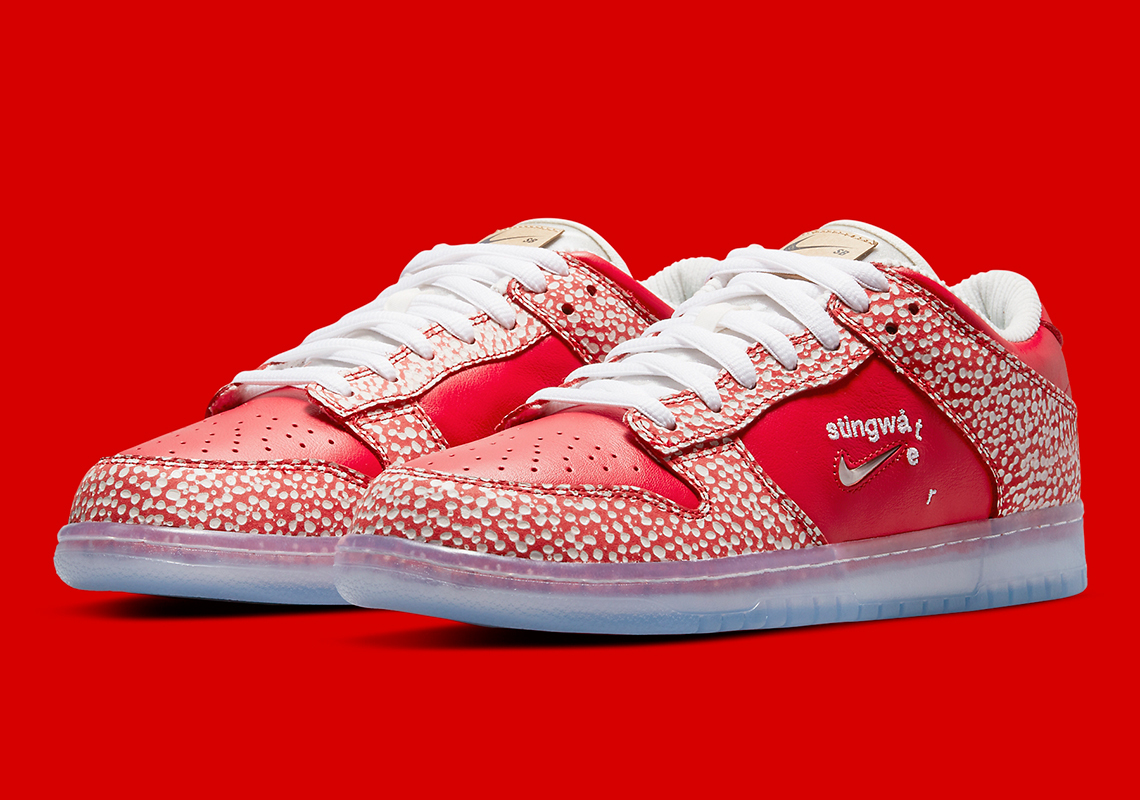 Hands down the most unique design to drop this month, this Nike x Stingwater collaboration draws inspiration from magic mushrooms. This unique crossover is designed by the wacky head honcho of Stingwater skate brand, Daniel Kim. The shoe features a playful ‘alphabet soup’ typography that falls to form the name of the skatewear outfit delicately placed above a miniaturised swoosh. The base of the design consists of a blue tinted transparent plastic that allows you to see the words ‘Plant Emoji With Eyes’ printed on the base of the shoe. Finally, a one of a kind cardboard tongue tag lays surrounded by a white corrugated brim to give the shoe a uniform ‘mushroom-like’ aesthetic. 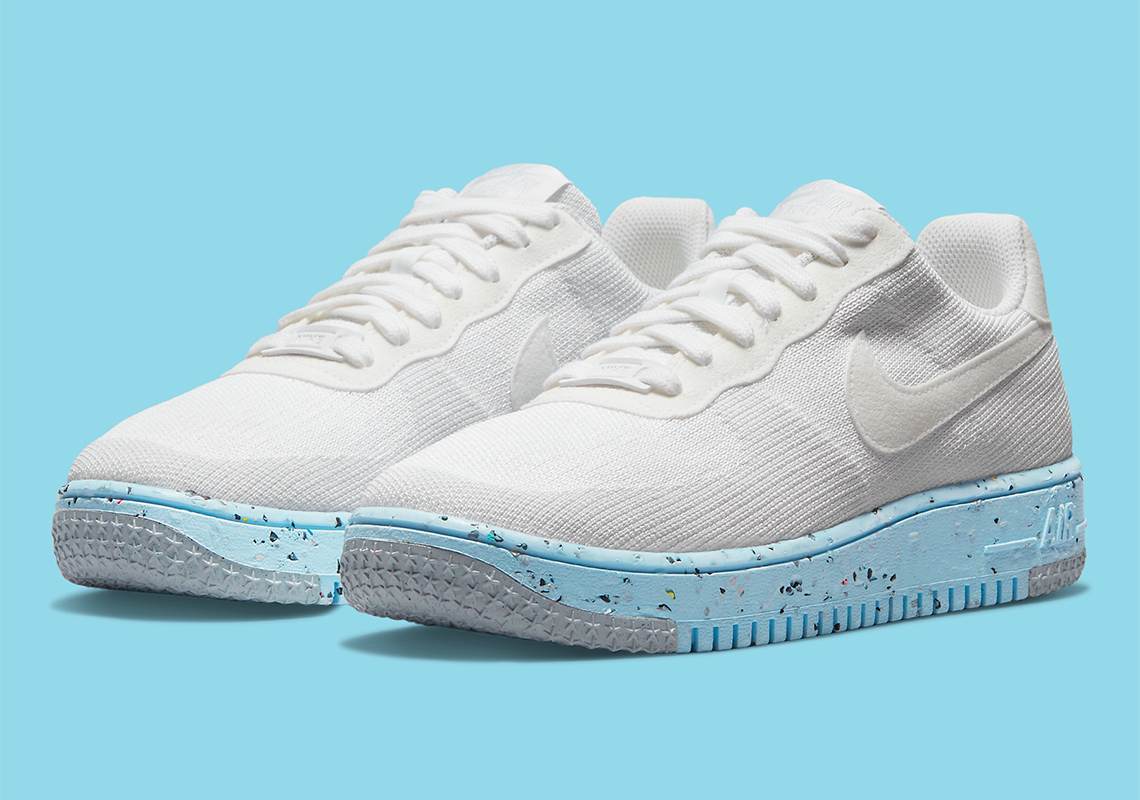 The Air Force 1 is about to have its midlife crisis as the classic silhouette turns 40 years old next year. Despite its age, the AF1 is still to this day one of Nike’s coldest and most classic conceptions. Nonetheless, it seems as if Nike believe the AF1 is in need of a contemporary reimagining. This comes in the form of a unique fusion between the companies two premier inventions – the AF1 silhouette and Flyknit technology. The upcoming pair feature a “Wolf Grey/White/Pure Platinum/Gym Red” colour palette that contrasts nicely with the paint fleck effect known as ‘Crater’ on the base of the shoe. This feature is perhaps most synonymous with Nike’s most recent Space Hippie series yet it seems to have made an easy transition onto the AF1. 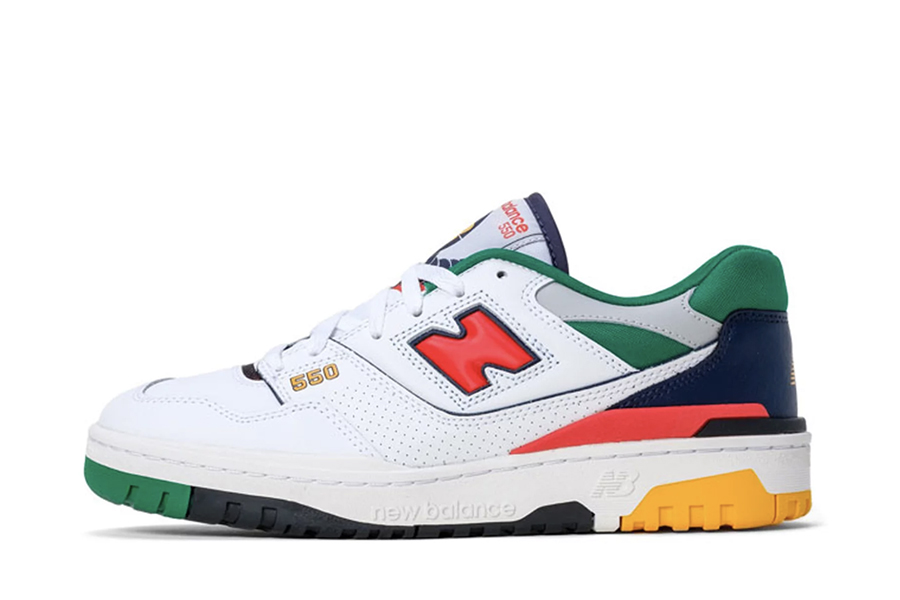 Whilst the original 550 was first released in 1989, the simplicity of this design has caused a resurgence amongst modern sneakerheads following several sought after drops last year. Despite the recent re-releases, a multi-coloured rendition of the classic basketball shoe has long evaded the wishlists of 550 fans. Now, New Balance has unveiled their ‘Green/Navy/Red/Yellow’ detailed model that bolsters a technicoloured NB branded heel and red logos bordered by navy stitching. 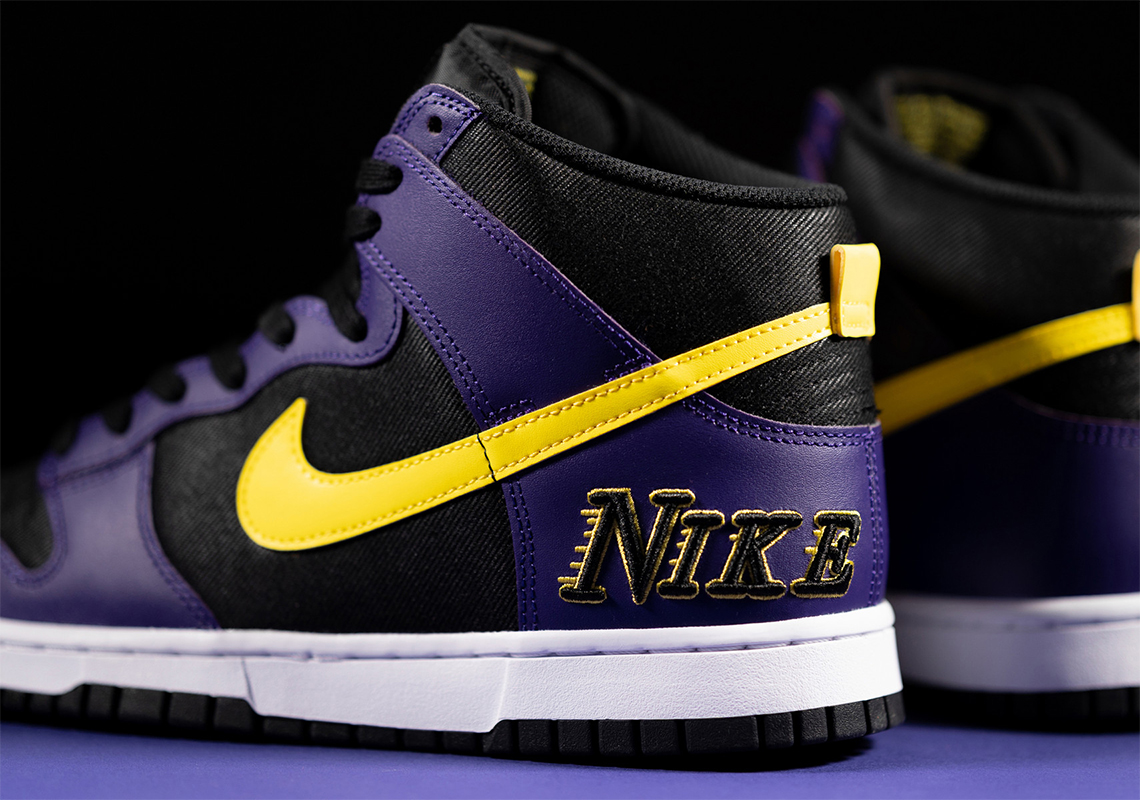 Following on from their coveted launch at the tail end of April, the Nike Dunk High ‘Embossed’ is being restocked on the 28th of May. This design is a perfect example of how Nike continues to use their most beloved silhouettes to pay homage to certain eras in the brands (and sports) history. The purple and royal yellow colourway is a clear nod to the LA Lakers, a team through which Nike has continued to grow as they tie their boat to the biggest sports franchise in the world.

The design features a fresh twist of black denim twill on the mid-panel, ankle and toe-box. Yet it is the retro logo on the tongue, taken straight from some of Nike’s earliest sportswear designs, that makes this design seem as if it has been plucked straight from a bygone era of Kobe & Shaq dominating 90’s basketball. 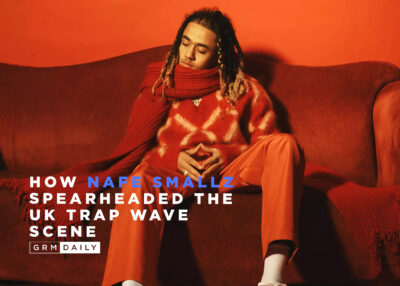 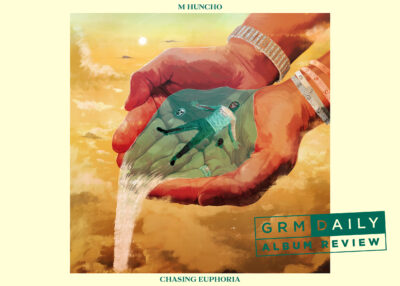