UK To The US: 13 mad Transatlantic collabs 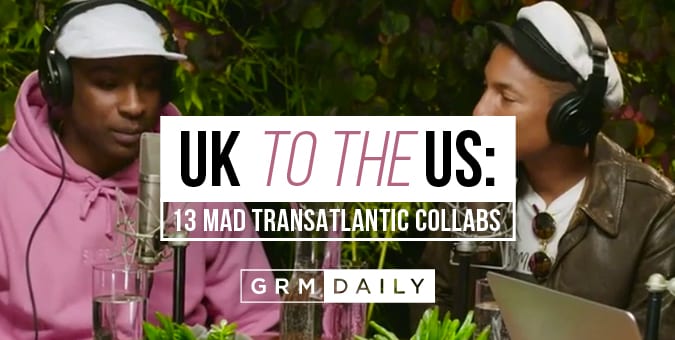 In recent times, it seems that there has been a lot of hype surrounding the link between UK and US artists. The internet went mad all the way back in January 2015 when Kanye invited Skepta, Stormzy, Novelist and others up on stage for his Brits performance back in February of this year – sparking rumours that Ye and Skepta were working together on new music. US superstar Drake, who has always embraced his love for the UK rap/grime scene, also made headlines when he popped up on stage with Section Boyz earlier this year and has always upheld a very close relationship with Skepta. On social media, there has always been love shown between artists and most recently, we have seen US artists Travis $cott and The Weeknd tweeting Giggs about his latest project.

While this new tradition of tranatlantic love is proving to be healthy for all those involved, there has been an argument that these US stars are simply using our homegrown stars as ‘props‘. Whatever your opinion on the current scene, it is no secret that the US and UK rap scenes have mixed before, and today GRM Daily bring you 13 of the best, courtesy of our man Natz.

The first inclusion on this list goes to one of the most recent link ups. The anticipation around Skepta‘s long awaited album Konnichiwa also meant that the features were hotly debated as well. While many expected a Drake feature, a classic link up came from “Numbers”, with a hook provided by NERD frontman Pharrell Williams. The two had become good friends over Skepta‘s feature on his OTHERtone and marked yet another success for the BBK member. The track was not what we had come to expect from Skepta over the past few years, with a more US influence. But still, these connects don’t come round too often.

For a long time, Sway was a constant in UK hip-hop and had large underground success with mixtapes This Is My Promo Vol.1 & 2 and debut album This Is My Demo in 2006. He gained mainstream success and was exposed to a larger audience by winning a MOBO in 2005 for Best Hip-Hop Act (defeating 50 Cent & The Game) and the Best UK Hip-Hop Act at the 2006 BET Awards. His success was elevated when he became the first European act to sign with Akon’s Kon Live label in 2008. To celebrate their new business partnership, the two released the club hit “Silver & Gold” track from The Signature LP and is a great mix of rap/R&B which showcases both of their supreme talents.

Ludacris‘s 2003 album Chicken-n-Beer was one of his most successful albums to date, charting at #1 on the US Billboard chart and even making chart listings in European countries England and Germany. The album featured classic tracks of the era including “Act a Fool”, “Hoes in my Room” and “Stand Up” [feat. Shawna]. On the UK release of the album, an additional track was added with a remix of Luda’s track “Southern Hospitality” feat. Ms. Dynamite and Maxwell D. While Ms. Dynamite shines through on her verse, Maxwell D, famed member of the Pay As U Go Cartel, steps up to the big stage and drops a sensational verse. The track almost feels like an early garage smash and feels that Luda is the one on the featured verse.

Collaboration between female artists in the US and UK is not a common thing, so a link up between two of the most hot female rappers of the modern day is surely a thing to be celebrated right? Azealia Banks has been making headlines over the past two years since she dropped her club smash and debut single “212” in 2011. Her mixtape Fantasea was given extended radio play over in the UK and featured a tune with London MC Shystie. The track, “Neptune”, sees both going back to back over a hard hitting instrumental and Shystie really comes into her own on this track. Shystie is a true veteran in the UK scene and his platform only helped elevate her to greater heights. The two came together again in 2013 for “Control It” and then famously falling out on Twitter after Azealia’s comments regarding grime and the UK scene.

This track has been heavily slept on, and with the official video only racking up 775,000 views, its time to give it the respect it deserves. In essence, the track incorporates the feel of old school Southern trap music, made famous by the likes of UGK, 8 Ball & MJG and Lil Jon and the lyrics and wordplay of grime which equates to a thumping track with both Bun B and Dizzee Rascal letting loose. In terms of the bigger picture, the track featured on Dizzee‘s Maths + English album which is considered behind other projects of work including Showtime and Boy In Da Corner, and maybe did not get the right push and publicity. The Dizzee on “Where Da G’s At” also sees him experimenting with his flow and while that is wholly refreshing to see, it may not be for everyone.

First of all, big up the Kray Twinz for bringing together a great set of artists for a massive track. For the Coventry born DJs/producers, this was only their second release [the first being “Punjabi MC”] and what a release it was. First on the track was US star Twista who was coming off the success of his 2004 album Kamikaze, which featured hit tracks “Slow Jamz” and “Overnight Celebrity”. His rapid tongue twister style sets the tune off and only adds to the hype of the overall track. UK star Lethal Bizzle then enters in the only way he knows how, with a fast flurry of bars which looks to test even Twista himself. Bizzle, who by that time had been the man behind “POW”, really owned his verse and showed up his lyrical ability, putting the track on his debut album Against All Odds. Big up Gappy Ranks on an impressive feature as well!

Long before Skepta shared a bromance with Drake and before he SHUTDOWN the grime scene, he featured on a track with rap veteran and Bad Boy P.Diddy. While this marked a momentous time for the Tottenham MC, the track never gained considerable airplay and seemed to drift into the shadows. This track was unique as an American rapper was actively sourcing grime and wanted to be a part of it and teamed up with Skepta as a means to do so. While many rappers may have tried to conform to fit an American mould, Skepta was proud to rep his homeland and his accent stands out here, alongside a familiar voice like Diddys. Personally, hearing P.Diddy scream “This is the Grime Remix!” throughout this track is enough to make it a certified classic.

Charlie Sloth’s first Hood Heat compilation album was a huge release, full of top urban tracks from the UK and the US. A follow up was never going to be easy; That is, until you put together three of the hottest artists together on one track. With a standout year in 2015 for Bugzy Malone, it was great to hear him let loose over this powerful instrumental alongside the ever talented Ace Hood. London based African artist Silvastone also adds another layer to the track and the chemistry between the three is quite interesting.

J Spades is often commented on for his authenticity on the mic and is ability to stay loyal and grounded. Since his MashTown roots, he has been known for his presence on tracks and real life and relatable lyrics. Add rapper and former Bricksquad member Waka Flocka Flame – who’s also collaborste with Giggs before – to that mix and you’ve got yourself a street banger. “3000”, which was released as part of J Spades’ More Money More Pagans 2 mixtape sees both feisty rappers going back to back, detailing their struggle and their intentions. What is great about this song is, instead of J Spades going to Atlanta and seeming all out of place, Waka comes to Hackney for the video, pedalling his push bike and posing in the local corner shop.

This meeting of minds is a dream come true for many rap/hip-hop fans and serves as both a rap song but also as a hard hitting social commentary on life today. Lowkey is a true writer and has never been afraid to tackle serious and culturally relevant subjects, from opposing the US and UK occupation of Iraq to his beliefs on Zionism. His first album Dear Listener was praised for its honesty and raw emotion and saw Lowkey’s music celebrated. In 2011, he toured with Immortal Technique, another figure who is known to tackle tough issues through his songs. The two then collaborated on the track “Voice of the Voiceless” which is taken from Lowkey’s Sound of the Struggle album, released in late 2011. The track is a wordplay medley, with the rappers acting as advocates from the ‘voiceless’ and has an almost haunting female hook, which only adds to the song.

In 2010, The Landlord Giggs was making headlines as his gigs were getting locked off left, right and centre by the Metropolitan Police and their overbearing fear of ‘security problems’. This saw Giggs’ story covered in the BBC and The Guardian and highlighted the somewhat bias nature of the country’s police force. The media coverage never looked to slow him down however and after his successful debut release Walk in da Park and a string of singles, “Talkin the Hardest“ and “Look What the Cat Dragged In”, Giggs enlisted the help of US singer and rapper B.O.B. In the UK, B.O.B was known for regular chart hip-hop hits “Aeroplanes” and “Nothin’ On You” [feat. Bruno Mars], whilst “Don’t Go There” showcased B.O.B’s grittier and darker side, which opened him up a larger audience. As always, Giggs brings his A game and sprays a number of memorable and quotable lines over the heavy instrumental.


In what seemed like one of the weirdest link ups of the past few years, Chris Brown enlisted the support of Section Boyz for his track “Whippin”, taken from his mixtape, Before Da Trap. The whole saga started when Breezy shared a video of him rapping with a London accent and shouting out Section Boyz, to which people almost couldn’t believe. The track is a trap-infused, party banger and sees Section Boyz bouncing off Breezy and Quavo [of Migos Fame] to make from an infectious and creative track. And if that wasn’t enough, Chris even attempts to spit in a British accent at the end.. which is worth a listen, if just for the novelty value!

This list would not be complete without Krept & Konan, who have been flying the flag for the UK scene, both at home and overseas. Since they dropped their now infamous remix of “Otis” on YouTube, they have gone on to great heights, releasing their third mixtape Young Kingz independently and it reaching #19 in the UK album charts. Undoubtedly the biggest track from the mixtape was their 2014 smash “Dont Waste My Time” and the remix only built on that buzz. What works with this remix is that everything seems natural and having two big stars like French Montana and Chinx Drugz (RIP) on the track doesn’t seem that weird. Krept and Konan are deserving of their status to work with big US artists and they even bring them some great UK rappers too (big up Fekky with the notable shout out!). This track served as a massive platform for them and their latest 2015 project The Long Way Home featured the likes of Wiz Khalifa, Rick Ross, Jeremih and YG.