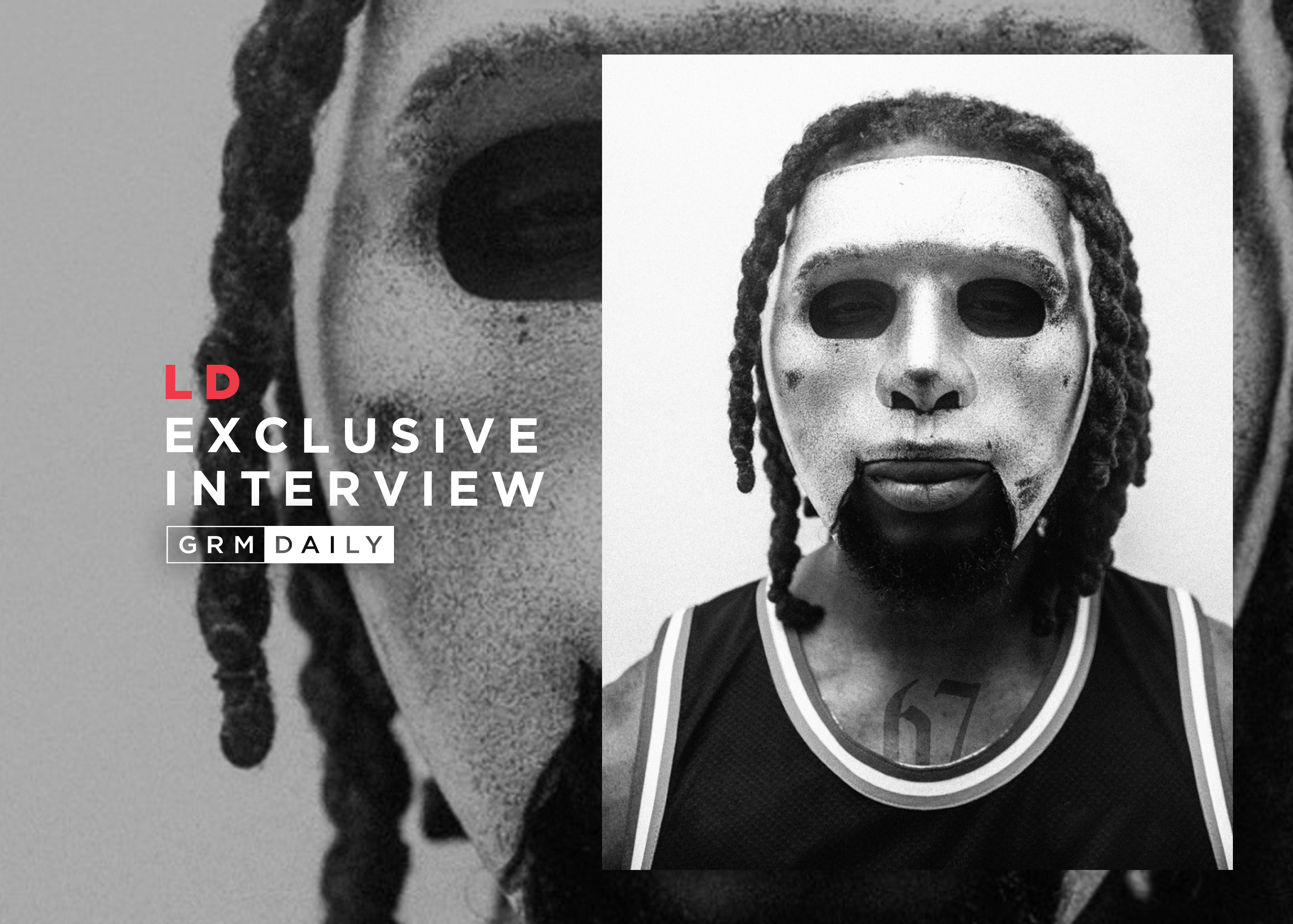 “The last time I felt free was in 2012” says 67 front man, LD. As he edges towards the end of a four-and-a-half-year sentence in jail, and as our conversation deepens, LD sounds more determined than ever – in spite of his seemingly never-ending saga with the police.

Armed with perhaps the most distinctively recognisable voice in UK rap, LD is a towering presence in UK drill, and a true exemplar of what it should sound and feel like. The opening sentence of his press release reads: “I need everyone to know, I’m the Godfather of Drill… If you want to talk about who started drill, and my name doesn’t come up –  that doesn’t make sense. That should be a crime.”

Over six years ago, 67 and LD came bubbling out of South London’s murky depths with the anthemic “Live Corn”. A track equally as dark and menacing as it was honest and authentic.  It’s more important though, because it marked a shift in the culture – It saw the birth of UK drill. As he puts it “they were taking the speed from grime but then the badness from drill and just mixing them to make UK drill”. This new concoction of sounds would quickly assert itself as the new sound of the youth.

Inspired largely by his various brushes with the law, LD unveils his new mixtape Who’s Watching. Spread across 11 tracks and 31 minutes of playback time, Who’s Watching is a dark, mostly storytelling-centred project firing back at the authorities – oh, and the opps.  GRM daily caught up with him prior to the release of Who’s Watching to discuss the state of the scene now, his contributions to the scene and why, after nearly 10 years in the game – with the last two behind bars – we still care.

So where did it all start for you?

“All of the 67 ones, I’ve known for most of my life. I grew up with them, same estate. A few of them went to the same primary as me. Like we’ve all known each other from childhood. When it came to music, I used to spit on and off. But I remember me, Dimzy and Monkey making a tape with Carns Hill, way back. Then when I was in jail, I made “Live Corn” which was a solo tune. I remember coming out of jail and putting that out – these times Krept & Konan were like the hottest guys out; they were proper bigging it up. Then slowly we started make a little change from it, which prompted us to start taking it more seriously. “

What was so appealing to you about the Chicago drill sonic. Why not rap, or grime?

“I grew up on grime, I love grime. I could just relate a lot more to the Chicago rappers. Even the way they used to move – it sounds mad – outside on the block topless, moving crazy. It wasn’t only about the music; it was even about the way they looked. The whole culture. It was as if it was for me. “

Theres a lot of obvious parallels between grime and drill. How similar are they really? What was your relationship with grime music like?

“I grew up on proper grime. Like when Tinchy Stryder was blowing up, I was listening. I was listening to garage too. I remember Sidewinder tapes and Eskimo Dance, all of that.”

Were you a raver?

“Nah, I wasn’t hitting the raves. My older brothers were though. I remember my older brother used to go on Déjà vu. So, I’ve always listened to garage and grime. I even remember when Roadside were spitting on grime, I used a be a PROPER  R.A. fan. But then when drill came, it’s like they were taking the speed from grime, and the badness from drill, and just mixing them to make UK drill.”

The way the police have imposed themselves on your career is a key theme of Who’s Watching. Have you ever really felt free?

“Nah, you know. The last time I felt free was in 2012. Since then, I’ve been in and out. Even when I’m not in, I’m on probation; it feels like somethings always going on. My Snapchats always used to be me getting stopped. Literally, that was it. And it was never normal police, it was always armed police or gang units. They never let me breathe.  BUT I’m still here, still breathing; that’s the main thing.”

With all of the controversy that surrounds drill, has it affected how your family looks at you as a member of the family?

“Nah, not really. Because I don’t talk to my extended family a lot. But I’m very present with my immediate family. My mum, my brothers, my direct cousins; the people that really matter to me. They all support me. They want me to keep going. They can see the money I’m earning. And they know, if I do well, they do well. I’m a proper family man.”

Do you think we are losing the real essence of drill music. A lot of purists say 2016-18 was the best period of UK drill. Have we moved past our greatest era of drill?

“Nah, I don’t think it’s passed yet. It’s gonna come back around. Every genre has it’s stages, but it’ll come back round to that gritty sound again. Everything goes in circle. It’s even the same with fashion, soon people are gonna be wearing flares again. “

It’s impossible to dismiss the impact you [and 67] have had on the culture, but do you feel like people are overlooking you now?

“But now, people are kind of just doing their own thing. Like I’ve been in jail, couple man are having kids, do you know what I mean? But lately I’ve been talking to the mandem and EVERYONE’S back on it. They dropped a tune called “Danger Hill” the other day, it’s doing numbers, going mad on the radio. But we’re back soon!”

The chemistry you guys have got with Carns Hill is really something quite magical. Do you you think he is underrated as a true innovator of sound in UK rap?

“I watched Carns work for years, I’ve even lived with the guy. We lived in the same bedroom at one point. I’ve watched this guy work with Youngs Tef, Blade, Skrilla, bare man. But it’s not even just him, the whole Hills production team; Loco, C’s, you get me. I’ve seen them work and the way they work: you just have to respect it. They make you fall in love with music.

Over the years we’ve seen you in a few different masks. What does the mask mean? Could you ditch it soon?

“I was saying this to somebody else earlier, when people look at you, they can read you. I might not always be 100% right, but I can read what you’re about. I don’t like judging people, but I can tell. With the mask, you can’t do that. So unless you know me, you don’t get to see my face. You can listen to the music and be the judge of it then.

“Whether I’ll take it off soon, you never know. I think about it all the time. But at the same time it’s a money-earner init. It’s an iconic thing. Its its own brand init.”

Really enjoyed the EP. It was sonically refreshing and I thought you sounded really alive on there. I found “Labour” quite interesting though. How politically aware are you? Why should the youth be interested?

*Chuckles in super villain* “You know what’s mad, I grew up on Labour. My household has always been a Labour household. Back in the day when Tony Blair was in power, life was good, you get me. I wasn’t around money when I was little. My mother has never been rich. Labour being in power was about benefits, and it benefitted my family. I appreciated how life was.

“It’s mad because I proper want to get the young people to start voting as well. I never used to think about before, but it’s important fam. It’s peoples futures init.”

What is the ultimate goal for you now?

“When I come out, I want to do the mad ting. Like, you know Lizzo? I want to put her on a track, I want to do something wild, something crazy. On a proper drill tune. I’ve thought about it.”

What is your favourite 67/ LD song?

“My favourite song with all of us would probably be “Skengman” because that was just massive. That’s one of the first tunes that is 7 minutes long and always gets played the whole way through. I didn’t realise ‘till recently that the tune was that long. Apart from “Skengman”, “Let’s Lurk”. Actually “Lets Lurk” ain’t even my favourite tune. My favourite, you probably wouldn’t have heard. “

Mine is probably “Take it There”

“I was gonna say that you know. Remember, I only do the hook on “Take it There”. It’s so real. You know what’s the maddest thing, I freestyled that hook. That chorus just came to my head like that. I don’t really write lyrics down like that, I just say it and it sticks in my head.”

Be sure to steam the new tape Who’s Watching below right now!