Rappers respond to the deaths of Alton Sterling and Philandro Castile 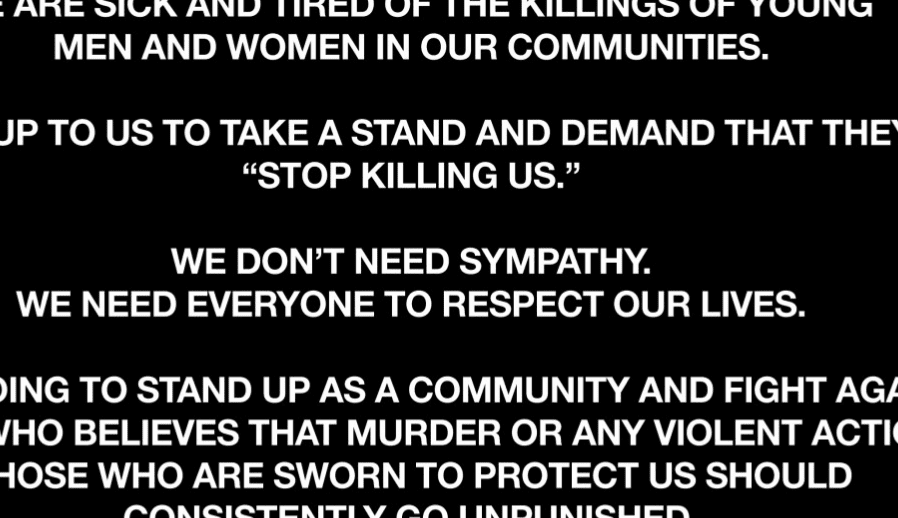 This week, the deaths of Philandro Castile and Alton Sterling brought the issue of police brutality towards black Americans into the limelight. Social media and news outlets were set ablaze with #BlackLivesMatter hashtags and opinions, as well as worries about the potential light punishments (if any) for the police that killed the men.

America’s rappers, singers and personalities took to social media to express their opinions on the killing.

Beyoncé updated her website with a defiant statement (pictured above), as well as displaying the names of those who’s lives were lost to police brutality during her show in Glasgow last night. Jay-Z released a track in response to the killings, listen to it here.

Beyoncé showing the names of the victims of police brutality during tonight’s show in Glasgow. #FormationWorldTour pic.twitter.com/0IgONrD8eP

Police get away wit Murder

What happened in Baton Rouge is unacceptable. We really gotta do something. THE POLICE GET AWAY WITH MURDER

Damn G. They really wicked, they killed a Hispanic man this morning In LA said he had a knife

YOU RACIST PUNK FUCK. YOU SHOULD HIDE pic.twitter.com/ura2GmfCMz

Talib Kweli, known for his debating and responding to trolls on Twitter, posted a large number of Tweets sharing his shock and conversating with followers.

Haven’t brought myself to watch #philandocastile shooting. Not sure I can stomach it RN. Tired. Not surprised. Numb. Angry. But I must.

Pay attention to Dallas. Dallas stay safe out there

Chance the Rapper commented on the unlikely punishment of the officer.

These guys murdered this man with his 4 year old daughter in the backseat? Is there any situation where police get arrested? Or convicted?

If you’re a Judge, or a politician or a fellow officer with a Conscience, what does it tell you to do? As a human being what do you feel?

Chris brown released a track named “My Friend”, for anyone dealing with injustice.

This song I released for free for anybody dealing with injustice or struggle in their lives. https://t.co/Tvgltmenhm

Fabolous shared a simple but powerful image of the hashtag on Instagram, and called for Obama’s action.

Less than 24 hours!! Another black man killed at the hands of a police officer. This shit is getting really spooky out here. The black man in America is becoming disposble by the Police!! These cops are walking away with no punishment or on paid leave while Black Men are being murdered, some even on camera!! Obama has got to do something about this before he gets out of office. Please @barackobama address this & Chicago’s street violence before you’re out of office. If you don’t, we have no chance in what’s to come. #RipPhilandoCastile

Schoolboy Q also released a remix for his track “THat Part” featuring Kanye West, Kendrick Lamar, Ab-Soul and Jay Rock. The remix comments on the death of Alton Sterling, with Schoolboy rapping;

“Gangbangin’ like we stand for somethin’ / When Alton Sterling gettin’ killed for nothin’ / Two cowards in the car, they’re just there to film / Sayin’ #BlackLivesMatter should’ve died with him / Wrong nigga in your hood, you don’ ride on him / White nigga with a badge, you gon’ let that slide?”

I wish I had the answers to solve the fuckery that’s going on right now but tbh I don’t have a clue…all I can do is urge everyone to do more, that’s what I’m gonna do. Protest, march, donate, speak out, call out bullshit, build within your community, help those in need etc. whatever it is that needs to be done. And don’t be the stupid idiot who thinks because we live in the UK that this isn’t an issue for us to take on, don’t be the stupid idiot who thinks because we live in the UK that black people don’t experience racism from the police, don’t be so flipping naive. We have black brothers and sisters dying in the states and we’d be cowards to just brush it off, this is all of our problems. That could easily be me or my lil brother or my sisters, I ain’t waiting for this poisonous, weak, racist, trigger happy mentality to spread around the world before we do something. Stop killing my fucking people smh, I won’t even lie, when the first series of police killing black people sprung up I thought smh this is fucked and had a passive attitude towards it but as times gone on you have to just think…are these racist Feds just gonna wake up everyday and kill innocent black people? Like yeah…today…I’m gonna kill a black kid and get away with it lol…you’ve lost your fucking mind mate. We ain’t having it anymore, fuck that. This isn’t a black vs white thing either, don’t let them twang you into thinking it’s that, but what I will say is that no one should be sitting back and watching this. If you choose to turn a blind eye to this you’re a part of the problem, regardless of your skin colour. This isn’t me speaking out because it looks politically correct or because it’s the right thing to do coz I proper couldn’t give a flying fuck tbh. this is coming from Michael a black man who has had enough of racist dickheads thinking they can wake up and kill my people. You can’t, we ain’t having it no more. Do your bit. Enough is enough mate, I ain’t waiting till a fed kills one of my bredrins before I rise up. And please stop thinking this is a strictly American thing you dumb fucks, Feds have been violating the mandem for YEARS. Smh.

JME discussed the distress of watching the graphic videos of the shootings.

Watched a man die on the internet before I went to bed, woke up and watched another man die before I have breakfast.

The mind is a delicate thing, I’m cautious of what I put into it, I don’t even watch videos of animal slaughter, the reality just hits home

So these police brutality videos are extreme for me, I have to cover the screen, honestly. But I have to watch them to know its reality

Swiss joined the likes of Jay-Z and Black Hippy by releasing a track to vent his frustrations. The track is named “I Can’t Breathe” inspired by Eric Garner’s final words.

There are protests calling for justice happening in London this weekend.