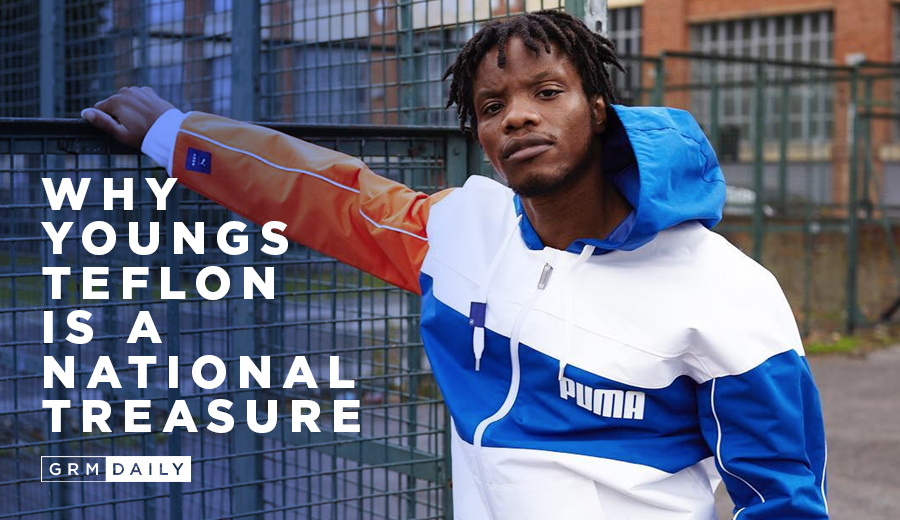 Youngs Teflon is probably your favourite rapper’s favourite rapper. Emerging onto the scene in around 2008, his subsequent releases demonstrated both his ability as an artist and his sheer work rate and drive to succeed. Always championed by other rappers around him, as well as a small, dedicated fanbase, Teflon has been making high quality rap music for over a decade now.

Youngs Teflon grew up in the borough of Lambeth, attending school in Brixton. Brixton was the epicentre of the explosion of drill music from around 2014 onwards in London, with pioneering groups such as 150 and 67 originating from there. Indeed, in an interview with Vlad TV, Dimzy from 67 said of Brixton Hill “it may as well be the capital of England” as it felt like their world revolved around this place.

Artists closer to Teflon’s own age were also involved, such as Blade Brown and Mental K. All of these artists shared CarnsHill as a common friend, and despite their sonical landscapes ranging from the slow rap of Blade Brown, to the much more upbeat drill anthems of 67, it felt like they were part of a very similar movement.

Teflon would go onto be a frequent collaborator with many of these artists, cementing himself as a mainstay figure in the South London rap scene. Teflon’s relationship with the South London scene and his own experiences of growing up in Lambeth, have undoubtedly shaped the music he creates. His music is undeniably grounded in the streets of Lambeth, and as a result, his gritty take on the trials and tribulations of life as a street entrepreneur feels that much more real.

Much of what makes Youngs Teflon such an engaging listen today can be found in The Call of Duty duology. Which whilst significantly rawer than the music he creates now, at its core still comprised what makes Youngs still so great today. Even then, there was a certain maturity, a sense that even though he was embroiled in a world full of violence, drugs and women; he was not aiming to glamourise or exaggerate anything.

Unfortunately, Teflon never truly ‘blew’ in the way many of his south London compatriots and collaborators such as 67 and K-Trap did. This appears to be largely due to his lack of desire to compromise his artistic integrity, in 2014, a wave took off, off the back of the Chicago Drill movement. Led by artists such as 67, Section Boyz (now known as Smoke Boys) and K-Trap, the sound of UK rap was seemingly changing fast.

Rather than be drawn into this wave and spat out, as many artists were, Teflon was still making songs for the same fanbase he cultivated back in 2008. This isn’t to say he was averse to dipping his toes into other subgenres such as drill music, but he always retained a sense of individuality in his music that ensured it sounded like a Youngs Teflon song regardless of the beat. An “essence” of Youngs Teflon can therefore be found in almost all songs he makes; no matter what genre it falls into, it is always unequivocally a Youngs Teflon song.

Young Teflon would take a break from music from 2016 to 2019, releasing no projects and only one official single, titled “Broken Dreams”. However, thankfully this was merely a sabbatical, and his return to the UK rap scene has been marked by a prolific output of quality releases.

His 2019 three part album entitled Blood, Swvgg and Tears demonstrated his relevance to the current scene, but didn’t feel like an attempt to win over new fans; instead it felt like an homage to his own cult fan base. Again, it is this dedication to creating real music that is true to himself that has garnered him such a devoted fanbase.

Young Teflon’s career illustrates how an artist can be more fulfilled catering to a smaller group of fans who truly care instead of attempting to please a much larger group of fans who don’t really appreciate the artist in the same way. Therefore, Youngs Teflon’s career trajectory can be seen as the result of a decision he made to stay true to himself, and an ambivalence towards the material trappings that come with achieving mainstream success within the music industry.

I was 16 when I fully embraced Youngs Teflon’s music. I was watching Nathan Miller’s Youtube documentary LDN and as the credits rolled, “SIXTEEN” by Tef came on. Something about the song cut straight to my core; I felt like I could relate to the mental struggles Teflon was expressing in that song, even though I come from a completely different background to him.

The ability he has to take you on a voyage through his mind stuck out to me instantly. Despite it being my first time properly listening to him, I felt like I had known Tef for years, and we were just having a conversation about where our lives were at, illustrates tales of pain and joy in a way that universalises his struggle, helping his music connect to people from lives dissimilar to his gritty South West London experience.

On the song Youngs Teflon reflects on his own life; whilst he knows he is a great rapper, he knows he is under-appreciated, and different to other rappers. This feeling of being taken for granted for your qualities is something that many people would have felt at some point in their lives, and it is Teflon’s ability to explore these universal emotions that sets him apart from so many other rappers in the UK rap scene.

This level of self awareness is undoubtedly rare in rap, and equally rare in real life. He goes from boasting he was “better than you man when I was 16” to almost sounding hurt by conceding “put time in my craft, you would have thought they would pay more homage”. This offers precious insight into the unique situation Youngs Teflon finds himself in the music industry today, as despite his ability and success being championed by a small group of important people, the reality is a large portion of the industry and fans do not give him the attention he deserves.

Part of this certainly stems from his dedication to his own craft, and his refusal to compromise his sound in pursuit of a hit. Tef knows he is one of the hardest, most complete rappers in the UK, and because he knows that, he doesn’t care.

When we talk about what makes rappers great, we often think of lyrics, or flows, or even their beat selection. With Teflon, what separates him from everyone else is what can be described as his essence as a rapper. This ‘essence’ constitutes his expertise in portraying his life. His ability to articulate his emotions and stories in an unusually humane way is what sets him apart from so many of his peers, who may be able to use more flows, or squeeze more punchlines into their verses, but will never be able to create art of the same magnitude and depth as Teflon.

That is what makes him so special, and so important. Many artists lose this ability to convey their thoughts genuinely once they become established in the scene, as they are lured into the comfort zone of making generic, impersonal songs with the purpose of making money instead of with the purpose of creating art.

When quizzed by Trench Magazine on what brings him joy, his answer is simple, and refreshingly devoid of materialistic ambitions. For him, it all revolves around “making people happy” and people are never as happy as they are when he is releasing his music, which always feels pure and authentic.

Whereas other rappers make music with ulterior motives, such as to make money, headline Wireless festivals or to attract girls, Teflon makes music for the hearts and souls of his fans, but primarily, he makes music for himself. This is what makes him such a special artist; in a musical landscape which feels congested by artists attempting to gain popularity and success through following a formula of generically talking about girls, drugs and designer wear, his humanity is refreshing.

So if Youngs Teflon is such a great artist, the question that begs is why has this not translated to the magnitude of success that the art deserves? Young Teflon himself appears to have the answer to this; on “Rehab” he makes the admission that “they say I’m talented but I need marketing” when talking about his relationship with his label.

This is undoubtedly the primary reason for why he is not in the consciousness of more rap fans today. Through both his music and his image to the public he demonstrates his lack of desire to compromise his music even though there appears to be a clear blueprint for success. Moreover, attention can be paid to Teflon’s status as “intergenerational” and how this means he doesn’t really fit into a class of artists by virtue of his time in the game.

An American equivalent maybe someone like J Cole, who is stuck between genre defining generations; in Cole’s case the conscious rap of people like early Kanye West and the ‘Internet’ generation of artists such as Chance the Rapper, whereas Teflon can be seen to be stuck between pioneers of the scene today such as Giggs, and the new British generation of rappers.

Indeed, both Tef and Cole have shown their relationship with the new generation to be complex; whilst both chastise the poor decisions these new school rappers can make with regards to the longevity of their careers, both Tef and Cole have sought to bridge the gap between generations. Whilst Tef hasn’t recorded an hour conversation with an artist equivalent to Lil Pump, on his Gasworks episode he spoke of the need to “look after his kids” as he feels a duty to help and look out for the generation below him in achieving their potential.

This could be labelled something like the “Middle Child syndrome” and whilst J Cole has undoubtedly used it to propel himself to popularity in America, it appears that it has held back the progress of Tef, as he is not seen as part of a movement but instead merely as an individual rapper. However, this is part of what makes his music so special, as he is able to work with a range of artists from Blade Brown to Flyo, instead of being confined to people from his generation.

What does the future hold? Young Teflon demonstrated with his release of both Blood, Swvgg and Tears and January Sales 2 in the last twelve months that he still has much to offer as an artist. Whilst his music has not fundamentally changed since his introduction to the scene, it certainly has evolved, and he is currently putting out some of the best music of his career.

Youngs Teflon has announced the upcoming release of Call of Duty 3, which should come out at some point this year. From the snippets he has teased on his Instagram story, plus the release of the more than stellar “6am in Miami”, Call of Duty 3 once again appears to promise a progression in the sound of Youngs Teflon whilst still remaining true to his artistic integrity and core values as a rapper.

For an artist such as Tef, who undoubtedly cares about their cultural impact and legacy, he has been able to continue make music he wants to make, and it is this commitment to this endeavour that has ensured his quality output, but also his unique position within the industry. This is something to celebrate; he may not receive the praise he deserves, but at least the current landscape of the music industry allows him a platform to create the music he wants to create for his dedicated fanbase. 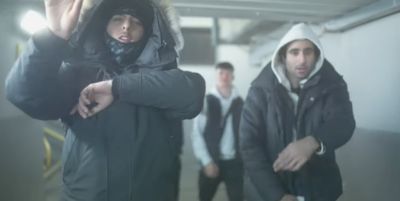 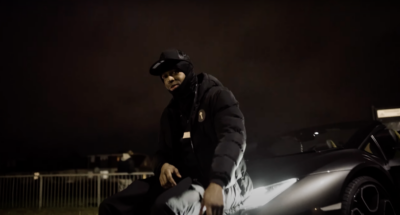 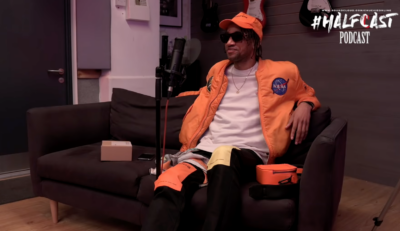 Chuckie's back with a new episode!...